Pastor Rob McCoy: “Do not be afraid”

NEWBURY PARK—“We are worried and fearful.  We talk about having faith, but our faith is maybe one-mile wide and one-inch deep.  We have been shaken,” said Godspeak Pastor Rob McCoy.  “God declares: ‘Not to be afraid.’  You can find this 365 times in the Bible.

“We have been honoring the laws of the land…and not gathering so as not to cause this virus to spread.   But this building is always open to you.  I’m not going to lock the door on you.   We have no childcare and we need to be very cautious with the elderly and with older folks with lung issues.  We will practice being six feet distance from each other.

Pastor McCoy introduced his sermon taken from Psalm 91 with his grandson, Oliver, reciting the entire psalm by memory.   Pastor McCoy said he wanted to focus on Psalm 91 as “we are sequestered in our homes…as our businesses and retirement accounts implode, as fear causes 1,000 griefs.

“He has brought us to a place where ‘He is my refuge and my fortress; My God, in Him I will trust.  Surely He shall deliver you from the snare of the fowler and from the perilous pestilence…and under His wings you shall take refuge.  His truth shall be your shield and buckler (Psalm 91:2-4).

“The enemy of our soul—the devil—operates by trickery.  Satan comes to ‘steal, kill, and destroy.’  The only thing he possesses is fear and deception.  He paralyzes us.

“Every culture has gone through a plague (bubonic), a pestilence (a virus, the Spanish influenza).  Martin Luther ministered through a great plague in his time while in London in 1854.   Psalm 91 deals with a plague.   This plague, for our generation, is not as deadly as past plagues.

“We need to turn off the television and press into God who will allow this pestilence to continue until we get His message:  He wants to be the one that inspires our work that causes us to serve one another in raising our families and turning to Him.

Pastor McCoy recounted the story of Corrie Ten Boom, who witnessed the death of her family to Fascists during World War II.  She and her older sister, Betsie, smuggled a small New Testament into the German concentration camp where they were being held.  During prayer, Betsie thanked God for everything including the lice in their barracks.   Corrie couldn’t do this.  It was only later that Corrie found out, that it was the lice that kept the German guards from entering their barracks and interrupting their Bible study.

“I want mercy,” said Pastor McCoy.  Grace is getting what we don’t deserve.  God gave us grace at His expense.  God makes us righteous because Christ imputed His righteousness to us.  He paid the penalty for us.  God expects us to care for one another.

“We need to call upon God,” said Pastor McCoy.  “Four names for God are: Most High, Almighty, Lord, My God.   We should seek:  “His protection, His promotion, His prosperity, His preservation.”

“We need to continue to support local businesses,”  said Pastor McCoy ”…like the man who bought a $500 gift certificate and then tore it up and gave it to the owner.”

(Editor’s Note:  Pastor Rob McCoy can be heard every day through his 7 p.m.  “Fireside Chat.”  Today’s 11 a.m. livestream service had 330 watching.  To view tonight’s epispde 12 “Fireside Chat” broadcast go to:  https://www.youtube.com/channel/UCYiP2FPff-_TH5kcjTp4oyQ.   Episode one registered 1,000 views. Today’s livestream viewers were encouraged during church announcements to register for a free Constitution Alive class with Rick Green hosted by Scarlet Lani as a six-day class next week in the afternoons from 12 noon to 2 p.m. by going to:  https://coach.patriotacademy.com/event/constitution-alive-crash-course/?inf_contact_key=e69302c0df5f30af8ac83c69a695943b or as a weekly Monday class from 6-8 p.m: https://coach.patriotacademy.com/event/constitution-alive-6-week-course-on-monday-nights/.) 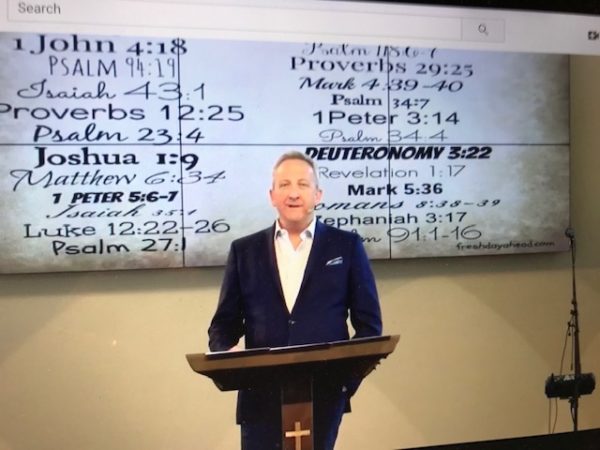