Pathetic! Bruce Can’t Get Arrested at Hollywood Beach- and He’s Trying To

Pathetic! Bruce cannot get arrested, and he is trying to!

Sunday May 10th at Noon we again took back our beaches! Doing it again this Sunday. 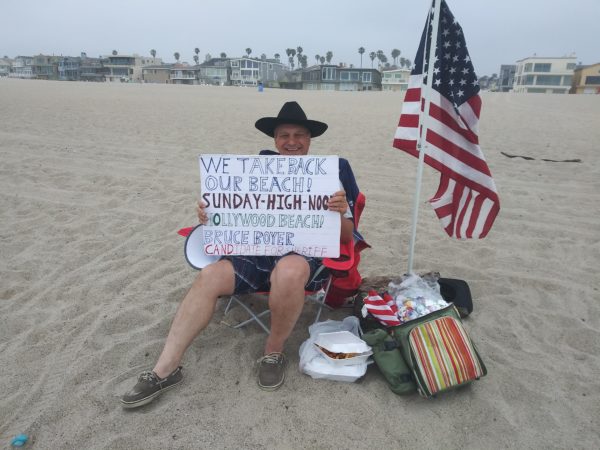 The ‘rules” and “orders” from a County Public Health Officer have NO legal authority. Our legislatures, our elected officials is the only body that can “make law”. They cannot tell us we cannot sit in lawn chairs or blankets with umbrellas on OUR beach!

On Sunday, May 3rd 2020; I, Bruce Boyer sat on Hollywood Beach, in my beach chair with my cowboy hat on and a massive American flag from 8:30 AM til 12:30. Appointed sheriff “Mustache Bill Ayub’s boys attempted to engage with me, twice, They were rebuffed in silence as I sat in my chair. No citation, no arrest. They know that I know they have NO legal authority.

For Round #2 On May 10th; I put out well publicized invitations and press releases to join me at Noon on May 10th on Hollywood Beach. Mustache Bill had a good dozen of his boys deployed at my designated entrance at W. Channel Islands Blvd.  The Boys were telling people their beach chairs were not-allowed.

The beach crowd was small owing to the now well publicized closures of all beach parking lots, that is is rarely crowded, all the restrooms are locked, the weather and it was Mother’s Day? Mom needs an open restroom.

The closure of the 101 delayed me. At my 12:30 arrival  I was personally greeted by Senior Corporal Cordova; who having falsely arrested me on Nov 7th  knows me and who apparently was reassigned to work this post, this day, who knew??  He attempted to engage me, reminding me that he knew me from “Thousand Oaks” and he began shouting and pointing at me that I could not bring all that gear onto the beach per ‘quarantine rules”… somebody got rattled… Cordova. I just smiled, bid him good-day as I strode past him and the boys onto our beach.

I set up my massive American Flag, beach chair, blanket, cooler and camping kit, sat down and awaited the reaction from ‘The Boys.  As they came near, I used my massive 50 watt megaphone to ask them to come over and cite me or arrest me!  They would motor by and wave. As other patriots joined me ( Gayle did ask if sitting in my lap in a beach chair means that she is breaking the rules?) I admitted to having coerced her… Social distancing for this cowboy means having a good-looking redhead in your lap! The people on the beach reacted with bewilderment and then by generally laughing at ‘The Boys” who then stayed far away…We noticed a few folks chase down the deputies and point us out, perhaps asking The Boys why they were not enforcing their ‘orders”? Why not? Perhaps The Boys did not notice us as we had the red white and blue camouflage concealing for us? 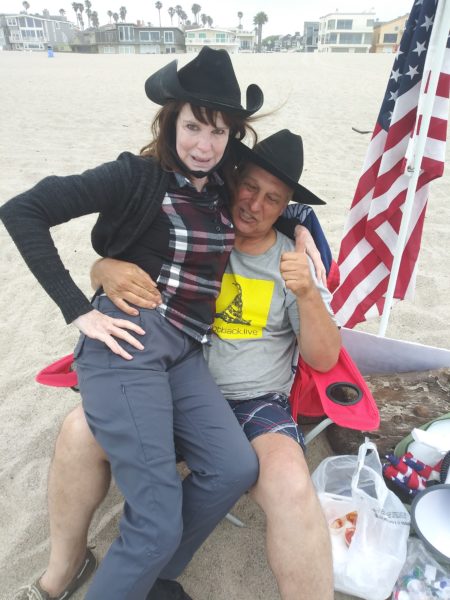 After the better part of two hrs it was getting cold ( it’s Ventura) and The Boys were staying far away I decided that I needed to destroy any pretense of their  ‘not noticing me”. I packed up the gear and moved to a point on the beach side of the Channel Islands Blvd entrance where I was clearly on the public beach 20 yards from their ‘Command Post”. I engaged them with my megaphone, sitting in my chair. I asked Cordova if he had maybe lost his handcuffs in the sand? I told him I cant help him look cause I’m sitting in my beach chair…I asked if maybe they left their citation books at home?   I told them that I was feeling very unloved as they would not come over and arrest me or cite me! I asked them to please come over and arrest me; that I was ‘breaking the rules”. After a bit with visitors and the local residents watching and now laughing, The Boys, six of them, got in their vehicles and motored away.. Feeling lonely, unloved and neglected, I set out in search of them. When I found them and approached, they again got in their vehicles and motored away. I then returned to the Channel Islands entrance and they again motored away. I was cold, time to go home. 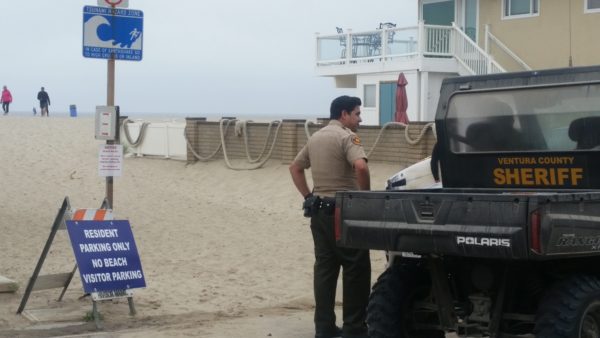 The Boys know that we will REFUSE to sign any ‘promise to appear”. We will NOT play that game. We will assert our right “to be taken before a magistrate without unnecessary delay”. That means they go get the on- call judge and we go there NOW. No ‘arrest” no handcuffs, just go before a judge. They do NOT want to do this as they would have to legally assert a ‘charge”. As there is no ‘law” they can not. They also probably know that we have attorneys on call, one being the husband of one of the Patriots. So that is why they folded. They are all bark, the toothless dogs have no bite. The other theory is that the wearing of a cowboy hat makes one untouchable by tyrants. We all did have cowboy hats on…

Bruce Boyer is a local civil rights uber-activist who “pushes the envelope”, businessman and rancher. He applied to run for the office of Ventura County Sheriff and was disqualified by the county elections div. He sued and his case in now in appeal.

Pathetic. That’s the perfect word to describe Mr. Boyer. BTW, another reason (among many) that you’re not qualified to be the sheriff when you don’t even know that the correct title is Senior Deputy, not Senior Corporal. Ventura PD two stripers are Corporals, Oxnard PD calls them Senior Officer, and the Sheriff’s Office calls them Senior Deputies.

Thanks for all the comments. Can some explain to me as to getting arrested fro wearing Cowboys jerseys? it sounds as if it’s not a joke? Is Oxnard really doing that? If so I gotta go over to the Oxnard PD wear’n my Dallas Cowboys gear! Cowboy hats look sharp when you buy quality ten X and up. I wear Resistol and Stetsons!

Bruce….I moustache you a question. Where did you fetch a fine lookin hat like that one on yer head partner? Yeehaw!

Love your attitude and persistence…. Get it!

You got my vote Bruce. Just keep that in mind if you end up in the position you are after and we happen to cross paths. 🙂

Hey, if I can make Caleb Standafer laugh then you know I got skills! We had such fun showing that ‘The Boys” of Mustache Bill wont touch us! I didn’t understand the “cowboy jersey” comment, but if wear’n a Dallas Cowboys Jersey is what it takes to get arrested in Oxnard; I got that covered! Oh and Jim, you might be wound a little too tight.. If you are feeling unsafe go’in out, maybe stay home? i and everyone who is not suffering from the panic-demic will go out, the gals can sit in my lap! So yeah, I kinda like that attention! There is no truth that the women who attend this event are required to sit in my lap. They are only offered the opportunity to!
I keep asking the ‘true believers” how it’s “safe” to be on the beach, but unsafe if I sit in a beach chair or on a blanket?” How there can be twenty people packed into the kitchen at In n. Out yet it’s ‘unsafe’ for us to go to church? None of them can tell me? Guess we are all too dumb to figure it out…Or it’s about control and compliance.
We are back again this Sunday the 17th at Noon. I have plenty of cowboy hats so come join us. I expect Senior Corporal Cordova will be back as well ( probably still looking for his hand cuffs in the sand..) so it will be entertaining! If you have to hit a beach for liberty; be very grateful that it is Hollywood Beach and you are taking it with a beach chair. Remember the ones who hit beaches such as at Anzio, Tarawa, Normandy, Battery Wagner, Pelilu and many others so that this generation of Americans would have liberty. Bring a really big flag!

Can tell you’re an Oxnard outlander, Bruce. Dallas Cowboy garb is favored by a certain gang present in these parts.

A big thank you to the Citizens Journal for running this. It was the biggest laugh I’ve had in several days.

Mr. Boyer – it appears to me you are starved for attention. Do you want everyone to notice you and pay attention to you. I understand the concept of your protest and have some sympathy. That said, these are very difficult times with major health issues and I don’t think your protest is valid or reasonable. Mr. Boyer, you are a nut