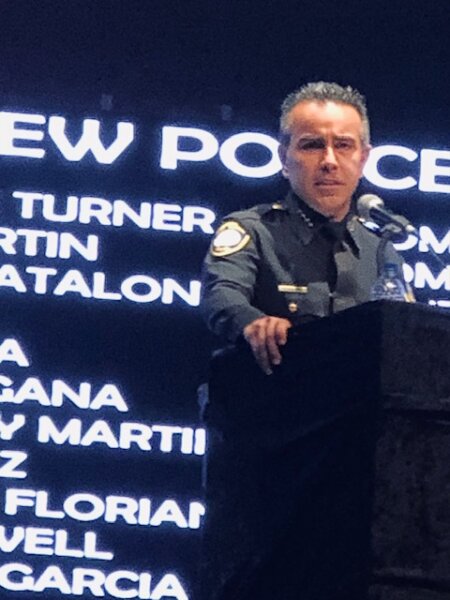 he master of ceremonies was police Chief Andrew Salinas.  His opening remarks spoke of the character and integrity of the officers of Port Hueneme.  The ceremony was to recognize past achievements of these ordinary men and women, who are doing extraordinary things for the community of Port Hueneme.

City manager Brick Connors congratulated the officers being honored.  He spoke of the past year events both nationally and locally.  He mentioned that 2020 brought out the best and the worst of our society.  He personally saw the local Port Hueneme Police Department de-escalating violence during the Memorial Day weekend protest and described them as protectors of Public Safety.

Police chief Salinas presented awards to Officer Michael Galvan who was promoted to Dispatch Supervisor; Officer Ryan Bates and Jesus Sanchez were both promoted to sergeant.

The police dispatcher of the year went to Linette Adams. She was also honored with a 20-year service pin for her service.

Investigator of the year went to Michael Hamrick. He was also honored with a 10-year service pin.

Reserve officer of the year was awarded to Frank Montelongo. He also received his 15-year service pin.

Supervisor of the year was awarded to Rick Perez for his continued leadership. He also received his 20-year service pin.

The MADD/ DUI award which is given to the officer with the most DUI arrests was shared between officer Henry Montelongo and officer Ricardo Miranda. Both had the same number of arrests during this period.

The 10851 award refers to the California Highway patrol code for stolen vehicles. Numerous vehicles must be recovered, and arrests made to win this award. Chief Salinas noted that almost twice as many stolen vehicles were recovered than were stolen in Port Hueneme. The recipients for this award were Henry Montelongo and Ricardo Miranda.

New members have been added to police force of Port Hueneme in the last 2 years. They include.

As a thank you for years of service to the city of Port Hueneme the following individuals were awarded service pins.

Chief Salinas spoke of the last year’s controversy nationally with law enforcement. As a gesture of their commitment to their core values and the city they serve all the officers reaffirmed their oath to protect and serve, led by Ventura County Superior Court Judge Gilbert Romero 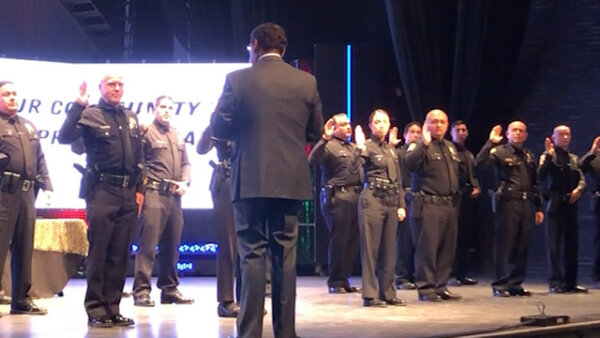 The award for officer of the year went to 2-year veteran Ricardo Miranda. Officer Miranda has been a star over the last year which is evidenced by how many awards he received this evening. When asked what this award meant to him after the ceremony he responded,” I try to do the best job necessary and it is nice to be recognized, but it’s just an award”.

Mayor Steven Gama congratulated the award recipients. He acknowledged how difficult their jobs can be and encouraged them to continue to do the right thing. He said the city and the people are proud of them and thanked them for their service to Port Hueneme.

Port Hueneme may not be my City, but I does my heart good to hear about this. I hope the citizens of the City appreciate these Safety Officers.

0
Reply
Back to top
mobile desktop