WASHINGTON, D.C.—The Coronavirus Aid, Relief, and Economic Security Act” or the CARES Act was signed by President Donald J. Trump this afternoon after the U.S. House passed it by voice vote earlier in the day despite efforts by Rep. Thomas Massie (R-KY) to demand a roll call vote that required a quorum of members present.  The U.S. Senate had approved the legislation with a 96-0 vote just before midnight Wednesday.

“I never signed anything with a ‘T’ on it,” said President Trump as he signed the 6.2 trillion dollar emergency relief act (which includes four additional trillion dollars for lending purposes). We’re going to vanquish this virus.  We are going to keep our small businesses strong and our big businesses strong.  And that’s keeping our country strong and our jobs strong.” 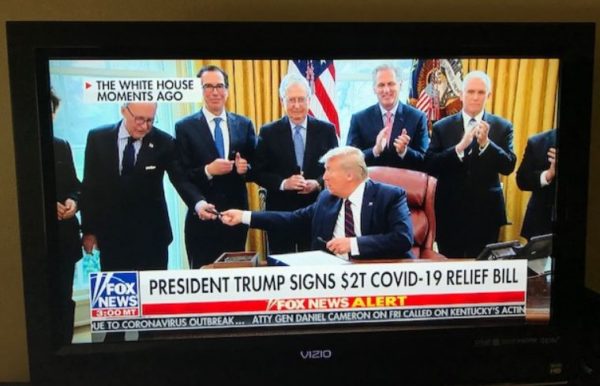 The 883-page Senate Bill 3548 (it was 240 pages last weekend before House Speaker Nancy Pelosi released her 1,540 page version of the bill), the largest historic emergency relief bill in U.S. history also provides $349 billion for business assistance loans which non-profits and churches can qualify for payroll, mortgages/rent, and utilities (with this amount forgiven as a grant instead of as a loan, if employees are retained and not let go).

Another key provision of the Senate bill is $250 billion for an extension of unemployment benefits from 26 weeks to 39 weeks with an extra $600 per week of federal benefits for those unemployed in additional to whatever amount California usually provides unemployment.  Independent contractors and those who are self-employed, will for the first time, be eligible for benefits.  (Editor’s Note:  Unemployment claims went up 3.3 million claims this week after historic lows 22 weeks ago.)

Four Republican (Senators:  Lindsey Graham (R-SC); Tim Scott (R-SC); Ben Sasse (R-NE); ;and Rick Scott R-FL) have warned that the extra $600/week provision could cause employers to fire employees and all allows workers to earn possibly more than what they would receive in their jobs through regular wages.   However, Democrats (including Senator Bernie Sanders, D-VT) spoke strongly against their objection and the White House is now refuting that Americans will get paid more than they normally earn.

The Senate relief bill also does the following:

The U.S. Senate passed bill may not  (Citizens Journal is trying to confirm) include elements that House Speaker Nancy Pelosi was trying to insert in the emergency bill such as:  mandated nationwide ballot harvesting and other vote-by-mail and early voting provisions; federal assistance to abortion providers such as Planned Parenthood (going around the current Hyde Amendment which since 1976 has blocked federal funding for abortion services); collective bargaining requirements; new diversity provisions for companies; and Green Deal measures such as solar panel testing requirements, new alternative energy funding and new environmental regulations.

However, the Senate bill does include some House-pushed measures such as:  $350 million for Migration and Refugee Assistance (up $50 million from the Pelosi House bill); $75 million each for the National Endowment for Arts and the National Endowment for the Humanities (reduced from $300 million each in Pelosi House bill); $25 million for the Kennedy Performing Arts Center in Washington, D.C. (reduced from $35 million in the House Pelosi bill) and additional funding for the Public Broadcasting Service.

(Editor’s note: As best as we can determine, this is the BILL which was passed.)

Senator Majority Leader Mitch McConnell (R-KY):   “This is a proud moment for our country as  Republicans and Democrats pull together.”

House Minority Leader Kevin McCarthy (R-CA):  “The American people needed a rescue.  We are listening to you.  Do your part and we will do ours.  The virus is here.  We didn’t invite it.  We didn’t choose it.   We are going to defeat it.”

Vice President Mike Pence:  “You (President Trump) told us, do whatever it takes to make coronavirus testing free for every American and a free paid American family leave.”

Treasury Secretary Steve Mnuchin:  “You (President Trump) made it clear to think big.  War on the virus.  Use resources to protect America.   Move quickly to deliver money.”

Response Coordinator Dr. Deborah Birx:   “Our first goal was ensuring the health of Americans.  We need to have economic data with health data.   Health is first;  but the economy  is important.”

The Palm Springs American Legion Post 519 is in dire need of financial assistance. Presently, we have less than $1,000 in the bank. Is it possible to get a grant under the 2 trillion relief legislation that the President has signed?