New York Governor Andrew Cuomo and his pal Gavin Newsom in California are playing a dangerous version of  “hide the salami” in their policies keeping vital information away from Federal government by denying them access law enforcement and DMV records.

These maneuvers, whose purpose is to protect illegal aliens living in Sanctuary Cities, are beginning to have collateral damage for law abiding citizens. A few days ago some 175,000 participants in the Empire State were told they can no longer be part of the USA Customs Global Entry Program.  This allows expedited customs clearance worldwide that is especially helpful for frequent travelers. Denying Homeland Security access to crucial data does not allow them to vet New York residents enrolling in the program. 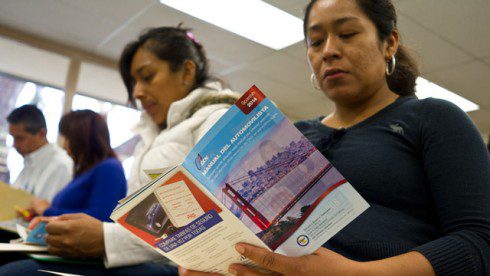 Such inconvenience is a drop in the bucket compared to U.S. Customs placing a permanent hold on exports of used motor vehicles with New York registrations.  The reason for this ban is that Customs officers are not longer able to access DMV records in Albany.  As a result they have no way of determining if cars being exported have been stolen or are in the hands of the proper owners.

Without such information nothing with a York plate will be legally departing from U.S. soil until the State changes their present policies.

With an average of over 800,000 used units being exported annually, customs putting an end to shipping any vehicle with New York registration is a big deal.  This is a 6 billion dollar business for the entire country. Anything that hasn’t cleared will need to be unloaded from containers and returned to the owners.  Money will be tied up and expensive storage fees will be incurred at ports throughout the East Coast.

New Customs regulations cannot be considered to be vindictive as they have little other choice to rectify their loss of crucial data.   Despite hatred spewed on the Trump Administration by Blue States, the Feds are not about to change. The law makers in New York, California and possibly other areas of the country contemplating putting in similar data blocking rules will have to determine where their priorities might lie.

Outside of the owners of these vehicles who are left holding the bag because of Cuomo’s obsession with defying the Federal Government, thousands of jobs will be lost of those who truck, pack, and ship used cars, trucks, and heavy equipment overseas.

In this case where the Federal government has good reason for halting New York citizens from participating in the Global Entry Program or exporting vehicles, it is unlikely that even a Progressive judge will issue a temporary restraining order against the new regulations.

Also working against the status quo of States getting injunctions from friendly District Courts, is the growing number of conservative judges being appointed in Federal Courts throughout the country; not to mention the future composition of the Supreme Court.

Both of the new regulations created by Cuomo’s intention to protect the undocumented residents of Sanctuary Cities might be considered to be noble. However, the collateral damage from his actions goes far beyond what he originally planned to do.

Even worse for New York, California and other Blue states with Sanctuary city laws being used to inhibit the operations of the Federal Government, what is happening with the car export ban is likely but a preview of coming attractions. It is easy to see how many Federal agencies will slap even more restrictions on States that deny them access to their data banks of vital information about residents.

If Donald Trump is elected to a second term, it is probable that citizens of currently heavily progressively run Governments are not going to sit around for the next 5 years allowing undocumented residents to  threaten their livelihoods.  Should this be the case, we can look for more scrutiny if additional restrictions come from States that defy the Federal Government.

Gavin Newsom and his buddy Andrew Cuomo better learn there is a long history in the United States of State Governments being short sighted in thinking that they can defy the laws emanating from Washington D.C.  We need only remember National Guard Troops sent by President Eisenhower in 1967 to facilitate integration Little Rock and Lyndon Johnson doing the same thing three years later in Selma to assist Dr. Martin Luther King’s civil rights campaign.

Federal authority has also been used for other purposes including the 1970 New York Postal Strike and to prevent the 1989 looting of Virgin Islands business’s in the aftermath of Hurricane Hugo.

Ever since Chief Justice John Marshal ruled Federal supremacy over the States in Marbury versus Madison in 1803, the States lack of authority to enact legislation that challenges the Federal Government has been clearly established

For these reasons Gavin Newsom and his Attorney General Xavier Becerra better look before they leap in passing new legislation pertaining to Sanctuary Cities, environmental laws, and other issues that conflict with the edicts from Washington D.C.  In defying Uncle Sam they may be playing a dangerous game of political Russian roulette that may well go beyond present levels of collateral damage.