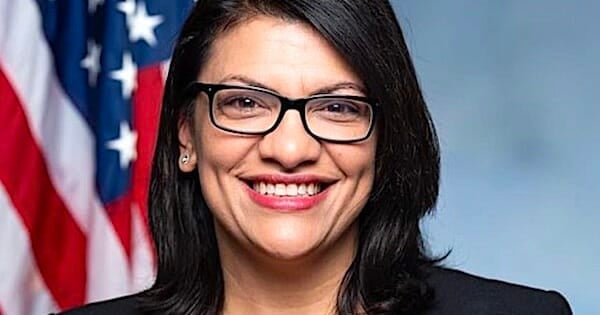 U.S. Rep. Rashida Tlaib, D-Mich., long has worked to expand antisemitism in America, but this time she’s being called out for having gone too far.

Her latest effort has been to try to coerce Treasury Secretary Janet Yellen into revoking the 501(c)3 tax-exempt status of various groups simply because they work with Israel, and in support of Jewish people.

It was in a letter, signed by other leftists in Congress including Cori Bushy, Andrew Carson, Betty McCollum, Mark Pocan, Alexandria Ocasio-Cortez and Ayanna Pressley, that Tlaib said she was concerned over her opinion that “U.S. charities are funding and providing direct support to Israeli organizations that are working to expand and perpetuate Israel’s illegal settlement enterprise in violation of international law, including supporting the dispossession and forced displacement of Palestinians from occupied East Jerusalem neighborhoods.”

It is the American Center for Law and Justice, which works with Israel and, in fact, has an office there, that responded to the leftist member of Congress.

In its letter to Yellen, the group explained, “Charitable organizations that provide support to Jewish people living in the State of Israel, including in the disputed territories, clearly meet all of the requirements for tax-exempt status. They are engaged exclusively in charitable or educational activities which do not violate any U.S. laws or clearly defined and established national public policies.”

The letter continued, “Moreover, even if there existed a clearly defined and established national public policy against Israeli settlement construction on the basis that is violates international law, that policy would have nothing to do with U.S. citizens supporting educational opportunities, humanitarian assistance, nutritional support, and medical assistance to people in those communities…”

The organization pointed out that had Tliab done “the barest minimum of research,” she would have uncovered two court cases in which the plaintiffs demanded the same relief.

“Both were dismissed by the courts in favor of the IRS and the charitable organization,” the ACLJ reported.

The ACLJ explained, “The true intentions of Rep. Tlaib and her comrades are quite clear. Tlaib has let her anti-Israel bias be known loud and clear. From wearing a shirt that erased Israel from the map to stating she ‘got a calming feeling’ when she thought about the Holocaust. Just last month she spoke to a socialist convention and referred to multiple antisemitic tropes about Jews. It is well past time that her racist dogma be silenced in Congress.”

The ACLJ noted that it is among Tlaib’s targets.

“Let’s all be clear: Antisemitism is hateful and dangerous. Like ALL forms of racism, there can be ZERO TOLERANCE for it, especially within our own government. And yet Rep. Tlaib, along with other members of the so-called ‘Squad’ in Congress which claim to be the epitome of forward-thinking, progressive Leftists, are totally comfortable introducing dangerous antisemitic policy proposals.”

The group explained, “Enough is enough. Antisemitism cannot be tolerated or allowed in the House of Representatives or any other branch of government. We continue to demand that Rep. Tlaib and any antisemitic representatives be censured.”

And, the ACLJ explained, “We are hopeful that Sec. Yellen will side with the truth and deny Rep. Tlaib’s request.

Thanks for this info – hard to find the truth now!

Immigrants aren’t what they used to be. Time to stop immigration from mental disordered spots such as where this woman came from.