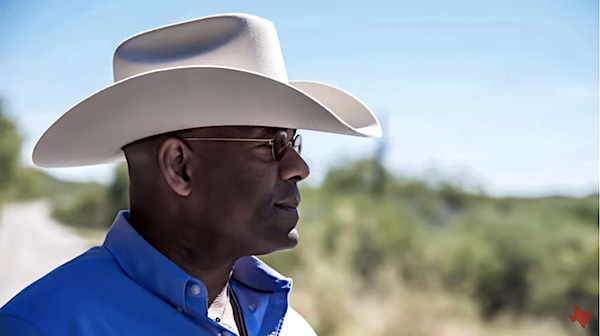 On Independence Day 2021, Lt. Col. Allen West ignited a GOP explosion as he announced his run for governor of Texas against fellow a Republican, incumbent Gov. Greg Abbott.

West, who recently stepped down as chair of the Texas Republican Party, made his announcement at Sojourn Church in Carrollton, Texas, as the former Florida congressman played a 7-minute video to launch his campaign.

“Now it is our time, it is our time to stand up and honor those words of Texas, Our Texas, and to secure the future for our children and our grandchildren, to make sure the growth, the opportunity, and the prosperity, the economic success that you see here in Texas, continues on,” said West.

“That means that we stay energy independent, and we fuel America, so that we’re not dependent on other nations – other nations that are our enemies.”

“We cannot live in a state that is the number one state for human and sex trafficking in the United States of America. That’s not how we protect our children and our legacy.”

“There comes a time when a warrior understands that, maybe he has to go back, to pull out that sword, and do that exact same thing that a 26-year-old did at the Alamo. Yes, William Barret Travis,” continued West. “When he drew a line in the sand, and he challenged the defenders at the Alamo to stand on the right stand of that line. I am now drawing my sword, and I would draw that line in the sand, and I will ask you to stand with me, to preserve the future, the legacy of Texas, to honor the words of our state song, to stand for something, or as my mother would say, not fall for anything.”

“This is our moment in time, I have not been in elected political office for about a decade. But I can no longer sit on the sidelines and see what is happening to these United States of America, what is happening in the place that I call home, where my daughters will raise their families, where my young grandson will grow up as a proud Texan.”

“It’s time for grandpa to step up, and once again find his place on the ramparts of freedom and liberty, just like those Georgians and Tennesseans did many years ago, for those 13 days at the Alamo.”

“You have asked me to come back into service for God, the country, and for Texas, and for a time such as this. And that’s why I am running to be your Governor of the Lone Star State, so that we can protect and defend our home, the Republic that we call Texas.”

Meanwhile, Republican Gov. Abbott last month got endorsed for re-election by none other than former President Donald Trump. He also said Texas would construct its own border wall to complete the effort Trump commenced, and invited Trump to his state for a border tour.

West has also been a staunch supporter of Trump, but he recently brushed off concerns about Trump’s endorsement of Abbott.

“You know, I don’t serve President Trump,” West said in June, the Texas Tribune reported. “I serve God, county and Texas. So that does not affect me whatsoever.”

Too bad he didn’t declare for President…