Once again Republicans have proven that when the radical liberal Democrats call us a party of racists, there is some merit to the charge.

During the past fifty years Republicans have made a conscious decision to disengage with the Black community, their most loyal voting block in the history of the party.  Why?

Because they saw more value and votes with white Southern Democrats, Dixiecrats, than with the Black community.

Sen. Thom Tillis is in a tough reelection fight for his seat in North Carolina.  During his last senate race in 2014, he only received 48.82% of the vote, the lowest percentage for a U.S. Senate candidate in the history of the state. 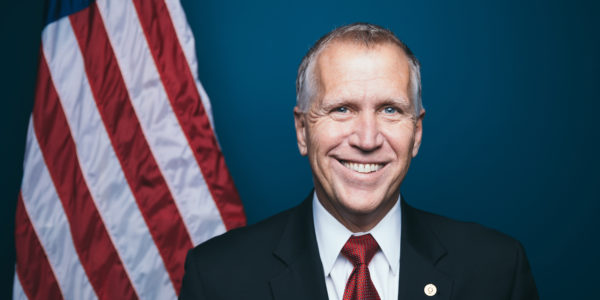 In addition to his poor showing last time, Tillis has gone liberal on his state on issues like illegal immigration and homosexuality.

So, what is Washington, D.C.’s Republican establishment’s response to Tillis’ problem?  To inject race into the election and piss off an already agitated Black vote in North Carolina.

Blacks account for over 21% of the population in North Carolina and the party and Tillis has little to no meaningful relationship with the Black community.

If Tillis loses his race, more than likely, Trump will lose the state also; thus, making it almost impossible for Trump to be reelected as president.  So, in many ways, Trump and Tillis are tied at the hip.

Establishment Republicans don’t really believe in our conservative message of smaller government, a controlled border, or taking our message directly to the Black community.

If they did, why would they spend over two million dollars in a Democrat primary to promote the candidacy of a radical liberal Black female?

You heard right.  The Senate Leadership Fund, a super PAC controlled by Senate Majority Leader Mitch McConnell, spent $ 2.4 million dollars in a Democrat primary in support of a Black woman.

This is according to McConnell’s own filing with the Federal Election Commission (FEC).

The Senate Leadership Fund is run by top McConnell confidant, Steve Law.  I have known Law for many years and he is one of the best political minds anywhere.  So, why he would engage in racial politics is quite unnerving to me.  I have never, ever seen any hint of this type of evil in him.

McConnell and Law think so little of conservatism and Blacks that as opposed to spending their money cultivating relationships with the Black community in order to help Tillis’s candidacy; they saw more value in playing the race card!

The $ 2.4 million went to boost the candidacy of radical liberal Democrat Black female state senator, Erica Smith.  She is in a four-way primary for the Democrat nomination to face Tillis in the November general election.

Smith is considered the most beatable Democrat against Tillis in the general; so, I get what Law’s logic was; but I am totally appalled by his actions.

I have worked Republican races all across the country and Law knows me very well.  Do you know how much good I could have done with this money to help our Republican candidate in North Carolina?

Law knows that I run both a Super PAC and a 501 c (4) so, we could have put that money to good use on behalf of the party.

But in their minds, its easier and more cost effective to inject race into an election and further divide a state and country, versus taking their conservative message directly to the Black community and ask them to support their candidate.

This is the 21st century, but we still have party operatives campaigning as though its 1960.

McConnell and Law should not only apologize for injecting the worse of racial politics into this election; but they should make an affirmative commitment to work with Black operatives to engage with the Black community in senate races across the country and cease and desist from the racial politics that should be in our past.

To my liberal friends, NO, Steve Law is not a racist by no means; but what he did is clear cut racial politics of the worst kind.

If Smith were not a Black woman, they would never have done this.  There is no question about this.  They know with the primary election coming up on March third, the same day as Super Tuesday for the presidential, that Black turnout will be high and they are hoping that lighting will strike and she will become the Democrat nominee to face Tillis; thus almost guaranteeing his reelection to the senate.

As Solomon told me over breakfast this morning in Proverbs 14:12, “There is a way which seemeth right unto a man, but the end thereof are the ways of [political] death.

McConnell and Law, you may have just cost us a U.S. Senate seat!

BUT, certain republican politicians are NOT Conservatives. They will court conservatives with false promises and just continue their progressive globalist policies.