Thousand Oaks residents once again spoke up in number Tuesday night in opposition to a proposed “Social Justice Commission,” among other topics during the Public Comments period of the city’s latest City Council Meeting.

As expected, there was some variation of topics during the Public Comment period, with one resident, Sue Angelo, speaking out against vaccine passports, and Jeff Schwartz, representing a group called “Open Discussion,” warning about media censorship – in particular, the one-sided information being presented on covid-19.

Most speakers, however, opined on past accusations of systematic racism and inequity and the related call for a local commission, or on the general plan’s move toward urban density increases.

Following is a detailed sampling of the public speakers from Tuesday night:

Judy Bruce – Simi Valley Resident. Warned about “Agenda 2030,” and about social justice and critical race theory being applied into local policies and general plans. “Agenda 2030 uses euphemisms like vision, sustainability, and smart growth, all behind the green mask of saving the planet,” she said. “These buzz words are code for surveillance and restrictions on our property rights and liberties,” she added. She also suggested that social justice is being used to “manipulate the masses.”

Elizabeth McDonald. Said the Social Justice Commission is an “arm of the CCP” (Chinese Communist Party). “Bringing this kind of commission into our city is completely unconstitutional. This impedes on our First Amendment – freedom of speech, and it impedes on equal protection under the law,” she said. She also called the commission divisive and racist.

Jose Coronado. “There are plenty of Thousand Oaks residents like myself, who are people of color – in my case Mexican American – who oppose the explicitly racialist justice groups now seeking to divide citizens into skin color factions, and doing so for their own agenda,” he said. 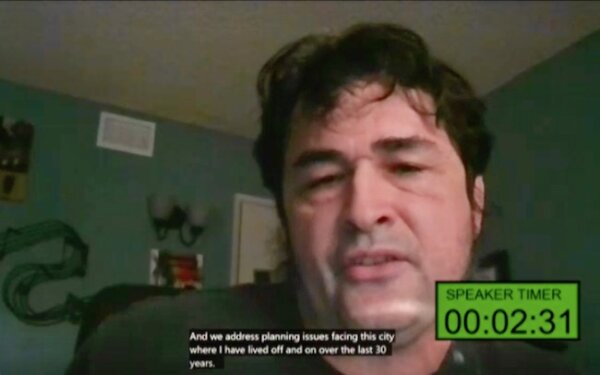 Elsa Aldequer. Said she’s an immigrant from El Salvador and a previous resident of Westlake Village, who is very concerned about the possibility of a social justice commission. “Being from another country, I think the law of the land, this is what we’re supposed to follow. And I think this is very unconstitutional – to favor one skin color more than another.” Ms. Aldequer, who now lives in the San Fernando Valley, said she misses living in Thousand Oaks.

“Believe me, you guys do not want to start mixing skin color with politics,” she warned.

Joelle Mancuso. Thousand Oaks resident for 22 years. Asked if it was the proper role of the city council to concern themselves with social justice. She said that according to her research, the role of city council involves “providing clean water, sewage, garbage disposal, parks and recreation, emergency services, senior services, COPD, business support and housing support.” She also suggested that there is no racism within our system.

Applying an interesting analogy, Ms. Mancuso then suggested that the city council form a committee to make sure that all residents only purchase healthy food… but then admitted that such a task was not a role of the city council. 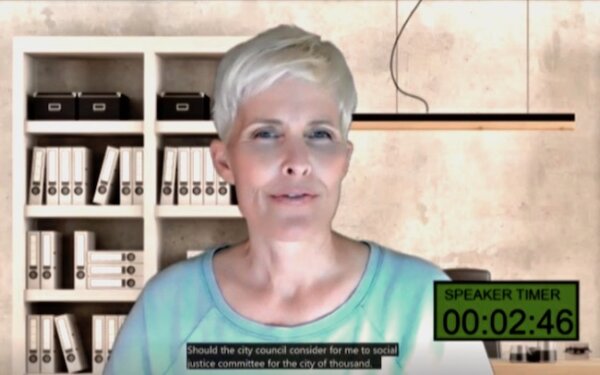 Audrey Bruckner. Thousand Oaks resident. “I do not consent to building high rise office buildings and large apartment complexes in downtown Thousand Oaks. This issue needs to be voted on by all taxpaying citizens,” she said. She also told the city council that she does not consent to transforming Thousand Oaks into a “smart city,” because she says it is a major tool for “surveillance capitalism.”

The next Thousand Oaks City Council Meeting will be held on Tuesday, May 25, 2021. To view the meeting online, go to the following url:  https://www.toaks.org/departments/city-manager-s-office/watch-totv/past-meeting-videos.

Kevin Harris is a reporter, editor and journalist, previous President of Cal State Northridge’s Society of Professional Journalists, and having worked for the LA Times and Newhall Signal. He is now also an author and videographer, and lives with his two children in Thousand Oaks.