Is Worldwide Depopulation Part of the Billionaire’s “Great Reset”

For more than ten years, meetings have been held by billionaires described as philanthropists to Reduce the Size of the World’s Population culminating with the 2020-2021 Covid crisis.

Recent developments suggest that “Depopulation” is an integral part of the so-called Covid mandates including the lockdown policies and the mRNA “vaccine”.

Flash back to 2009. According to the Wall Street Journal: “Billionaires Try to Shrink World’s Population”.

In May 2009, the Billionaire philanthropists met behind closed doors at the home of the president of The Rockefeller University in Manhattan.

This Secret Gathering was sponsored by Bill Gates. They called themselves “The Good Club”.

In May 2009, the WSJ as well as the Sunday Times reported: (John Harlow, Los Angeles) that

“Some of America’s leading billionaires have met secretly to consider how their wealth could be used to slow the growth of the world’s population and speed up improvements in health and education.”

The emphasis was not on population growth (i.e Planned Parenthood) but on “Depopulation”, i.e,. the reduction in the absolute size of the World’s population. 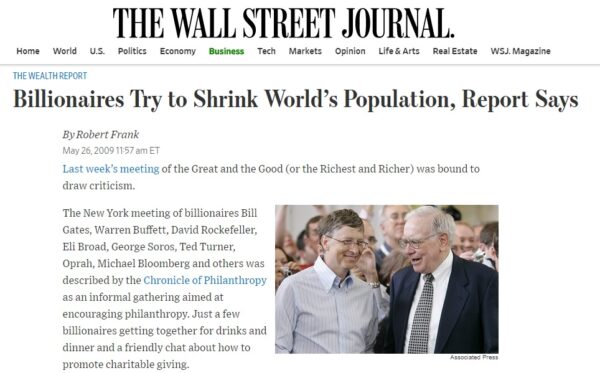