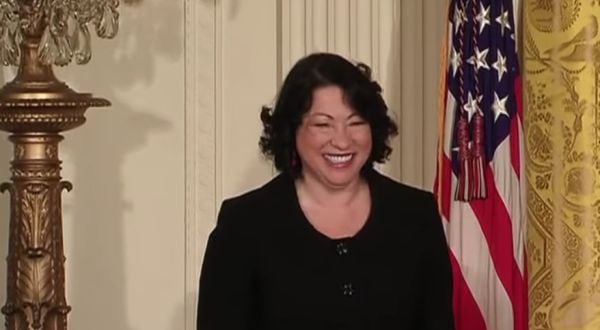 Sonia Sotomayor, whose U.S. Supreme Court career inauspiciously launched with a number of claims about her lies, on Friday ran up the flagpole a series of claims about COVID that, while repeated regularly to bolster the vaccine idolization of the Biden administration, were just wrong.

“We have over 100,000 children,” she claimed, “…in serious condition and many on ventilators.”

Here is Justice Sotomayor saying that "hospitals are almost all full capacity" and there are "over 100,000 children" hospitalized with covid "many on ventilators.

None of those things are true. Not even close. pic.twitter.com/MqWEL2UvJg

She immediately was called out on social media, and the PostMillennial report captured that.

“To date, per the CDC, 694 children between the ages of 0-17 have died with COVID. As to hospitalizations, many children are hospitalized who are found to have COVID, but are not admitted with COVID symptoms as a cause,” the report confirmed.

“Dr. Anthony Fauci recently noted that many of these were not hospitalizations due to COVID, but instead were with COVID. He said that children who were admitted to the hospital for any reason were tested for COVID, meaning that many children who seek medical treatment for other reasons are found to have COVID.”

On social media, Greg Price addressed Sotomayor’s wild claims: “None of those things are true. Not even close.”

The display of dancing around the truth came as the court heard arguments Friday in the case National Federation of Independent Business v. Department of Labor.

The businesses are arguing the Biden administration cannot impose vaccine mandates on workers because it is not essentially a workplace issue.

The report explained, “Counsel for the independent businesses spoke about the vaccine mandate coming while the Delta variant of COVID was most prevalent in the U.S., saying that the current variant, Omicron, is of far less worry in terms of serious illness or death. But Justice Sotomayor interrupted, saying ‘Counsel, those numbers show that Omicron is as deadly and causes as much serious disease in the unvaccinated as Delta did,’ despite this being entirely false.”

Sotomayor charged, “The numbers… look at the hospitalization rates that are going on. We have more affected people in the country today than we had a year ago in January. We have hospitals that are almost at full capacity with people severely ill on ventilators.

“We have over 100,000 children which we’ve never had before, in serious condition and many on ventilators. So saying it’s a workplace variant just underscores the fact that without some workplace rules with respect to vaccines or encouraging vaccines, because this is not a vaccine mandate.”

“What we mean by that is that if a child goes in the hospital they automatically get tested for COVID and they get counted as a COVID hospitalized individual, when in fact they may go in for a broken leg or appendicitis or something like that. So it’s over counting the number of children who are ‘hospitalized’ with COVID as opposed to because of COVID.”

Sotomayor was the leader of the squad of leftists on the court, also including Stephen Breyer and Elena Kagan, who came to the court prepared to argue that the Biden administration could do what it wants.

Breyer and Kagan expressed concern the mandates were not imposed earlier, but the science reveals that those who are vaccinated and boosted still can be infected and spread the infection.

The National Review noted Sotomayor also claimed not to be able to understand the distinction “between federal authority and state police powers.”

Those are clearly defined by the 10 Amendment, which recognizes that some powers are granted to the federal government, but those that are not specifically assigned remain the responsibility of the states or the people. It states, “the powers not delegated to the United States by the Constitution, nor prohibited by it to the states, are reserved to the states respectively, or to the people.” In legal cases, they are known as “police powers,” and refer to efforts to regulate the health, safety, and morals of the people.

“I’m not sure I understand the distinction why the states would have the power [to institute a mandate such as OSHA’s], but the federal government wouldn’t,” Sotomayor said. But when Ohio solicitor general Ben Flowers began to explain, she cut him off.

Sotomayor also claimed the vaccination mandate is not, in fact, even a mandate.

“It’s something totally different,” she claimed.

Sotomayor’s flexibility with the truth was highlighted more than a decade ago when she was nominated to the court.

Writer John R. Lott at Fox News cited the controversy over Sotomayor’s statement that, “a wise Latina woman with the richness of his experiences would more often than not reach a better conclusion than a white man.”

Sotomayor responded to that controversy in meetings with senators at the time,  claiming it was more or less a simple mistatement, but the commentary explained, “There is significant evidence that Sotomayor has been less than honest in private meetings with the senators.”

He continued, “The Wall Street Journal reported on a series of interviews it had done with Senators about their private meetings with Sotomayor. Incredibly, every one of Sotomayor’s private statements to the senators, as reported by The Journal, were not only false, but she should also have known that they were false when she made them. Each inaccurate statement to the senators involved speeches the judge had given numerous times and that she had clearly reviewed before meeting with the members of the Judiciary Committee.”

He continued, “For instance, shortly after Sotomayor’s nomination, her now infamous Berkeley law school speech began to receive public scrutiny. Understandably, many senators asked her about her statement…”

While Sotomayor apparently claimed to senators those words were “inadvertent,” it was revealed that she had used the “equivalent phrases during at least seven different speeches over a period of a decade.”

The column noted another section from speech that referenced a “wise Latina” making better decisions.

“Justice O’Connor has often been cited as saying that a wise old man and wise old woman will reach the same conclusion in deciding cases. I am not so sure Justice O’Connor is the author of that line since Professor Resnik attributes that line to Supreme Court Justice Coyle. I am also not so sure that I agree with the statement. First, as Professor Martha Minnow has noted, there can never be a universal definition of wise. Second, I would hope that ‘a wise Latina woman with the richness of her experiences would more often than not reach a better conclusion than a white male who hasn’t lived that life,'” Sotomayor said.

The commentary charged, “The Rule of Law states that it is the law, not the judge’s personal history, that should determine the verdict. Yet, Sotomayor disagrees with Justice O’Connor’s statement and believes that women and men or Latinos and whites will come to different conclusions, and that Latina women generally come to better conclusions than white men.”