WASHINGTON, D.C.—President Donald J. Trump spoke Tuesday to Congress and the Nation about “The Great American Comeback.”  The 45th President spoke on:  The Blue-Collar Economic Boom; Supporting Working Families; Lowering the cost of Healthcare; and Protecting National Security in the annual State of the Union Address.

House Speaker Nancy Pelosi became the controversial figure of the night when she stood up and tore up her copy of President Trump’s speech at the close of the night.  When asked why?  “It was the courteous thing to do,” Pelosi said.

“The years of economic decay are over.  The days of our country being used and taken advantage of and scorned by other nations are long behind us.  Gone are the broken promises.

“In three short years, we have shattered the mentality of American decline.  We have rejected the downsizing of America’s destiny.  We are moving forward in a pace that is unimaginable.   We are never going back.  Our economy is the best it has ever been.

“The military is completely rebuilt.  Our power is unmatched.  The border is secure.   Families flourish and our values are renewed.  Pride is restored, so I say to our great nation and members of Congress, the state of our great country is stronger than ever before.”

“Our agenda is pro-worker, pro-worker, pro-growth and pro-American,” said President Trump who celebrated a 50-year low-unemployment rate of 3.5 percent and one million more job openings than job seekers.  In 2019, employers added an average of roughly 175,000 jobs per month.  The U.S. economy added 2.1 million jobs last year and seven million news jobs since his election.  The African American, Hispanic American, and Asian American unemployment rates have reached the lowest rate ever recorded and the unemployment rate for women is the lowest in 70 years.  Women have filled 72 percent of all new jobs.

Veteran unemployment dropped to a new low while unemployment for disabled American reach an all-time low.   Workers without a high school diploma have the lowest unemployment rate in U.S. history with a record number of young Americans now employed.

“Seven million Americans are off food stamps.  Ten million are off welfare.  Since my election, net worth of wage earners increased by 47 percent—which is three times faster than the top one percent.  This is a blue collar boom,” said President Trump.

“The median household income is at the highest level ever recorded.  Since my election, the stock markets have soared 70 percent and added 12 trillion dollars in our nation’s wealth.”

The President also highlighted the signing of the United States-Mexico-Canada (USMC) Agreement and the first phase of the trade deal with China.  He stated that the United States became a net energy exporter and touted his administration’s Opportunity Zones for investment in economically distressed areas.

The president gave his support for paid family leave and affordable childcare.  He called on Congress to pass legislation on School Choice, which will allow parents to take federal funds allocated to their children to a school of their choice.

“No parent should be forced into a failing government school.  Every young person should have a safe and secure environment to learn and grow.  My administration will give our citizens the opportunities they need regardless of race or background.

Lowering the cost of Healthcare:

“We made a pledge, we will always protect patients with pre-existing condition.  I will protect Medicare and your Social Security, always,” said President Trump.   “The American patient should never be blind-sided by medical bills.  There are those who want to take away health care and abolish private health insurance for 180 million happy Americans.

“We will never let socialism destroy American healthcare.  We will not allow those who unlawfully cross our borders raid the Medicare benefits of our seniors.

“Our goal is to give every baby the best chance to thrive,” said Trump.  “I am asking Congress to pass legislation to stop late-term abortions.   Whether, you are Republican, Democrat, or Independent, every human life is a gift from God.”

President Trump also asked Congress to extend family leave to all mothers and fathers across the nation.  “Our child tax credit gives 40 million families an extra $2,200.”

President Trump criticized illegal alien sanctuary cities which he claimed were undermining federal immigration enforcement efforts.  He celebrated the reduced flow of illegal immigrants across the southern border.  The U.S. border with Mexico now has 100 miles of new wall.

“My administration defends religious freedom and the constitutional right to pray in public schools.  In America, we don’t banish prayer, we don’t tear down the Cross. We don’t tear down symbols of faith.  We celebrate faith.  We cherish religion.  We raise our sights to the glory of God.  We believe in the first amendment.

“We believe in another constitutional right, so long as I am president, I will always protect your second amendment right to keep and bear arms.

“We will keep America safe and support men and women at every level, including our ICE (Immigration and Customs Enforcement) officers.  Last year, they arrested more than 120,000 aliens who committed 10,00 burglaries, 45,000 assaults and 2,000 murders.”

President Trump says he wants Congress to provide “justice for victims of sanctuary cities” by passing legislation to allow victims to sue cities or the state when “loved ones are hurt or killed.”

The president claimed that border crossings had gone down by 75 percent since May (dropping eight straight months in a row).  “My administration strongly defends our national security and combatting radical Islamic terrorism,” said Trump.

Soleimani, killed on Jan. 3 by a drone missile, was an Iranian major general in the Islamic Revolutionary Guard Corps and commander of its Quds Force, a division primarily responsible for terrorist operations.

President Trump invited 17 guests he introduced during the State of the Union Address: 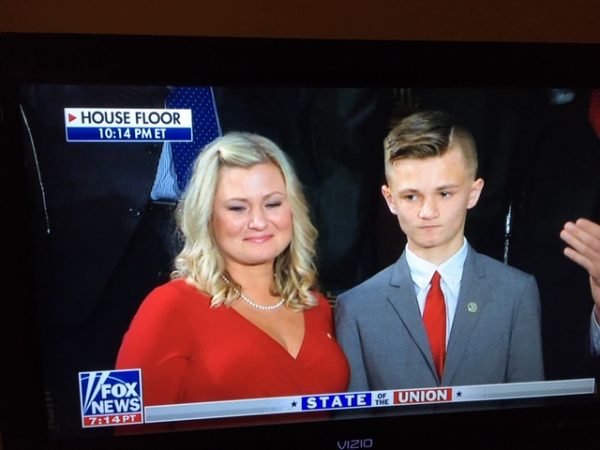 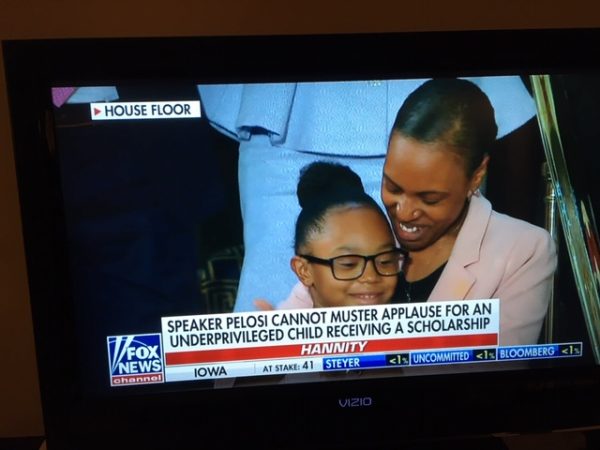 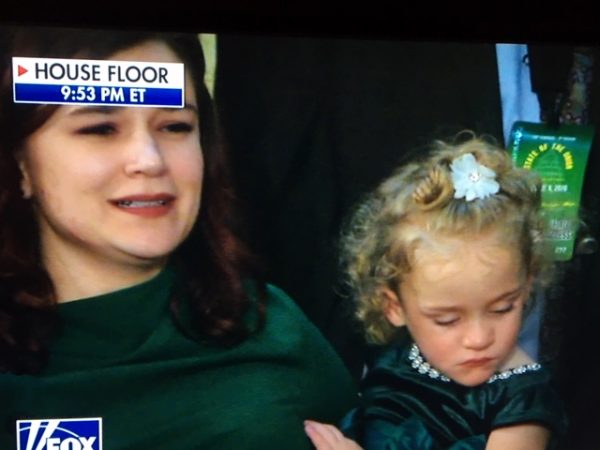 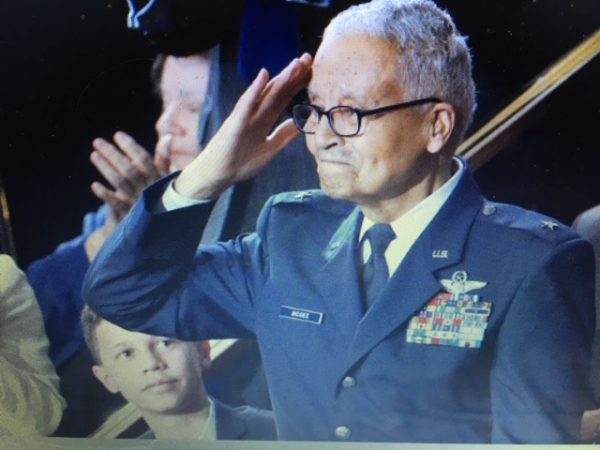 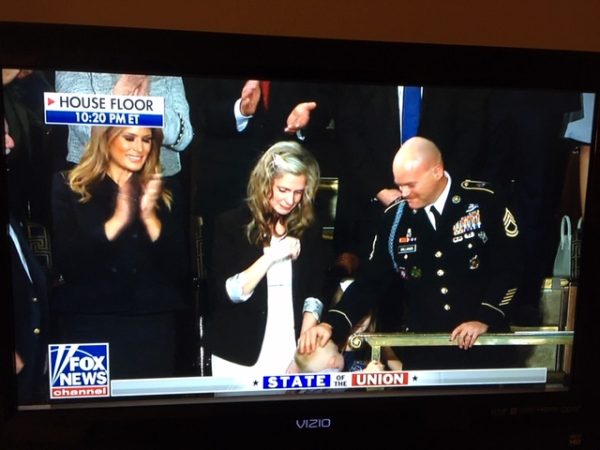 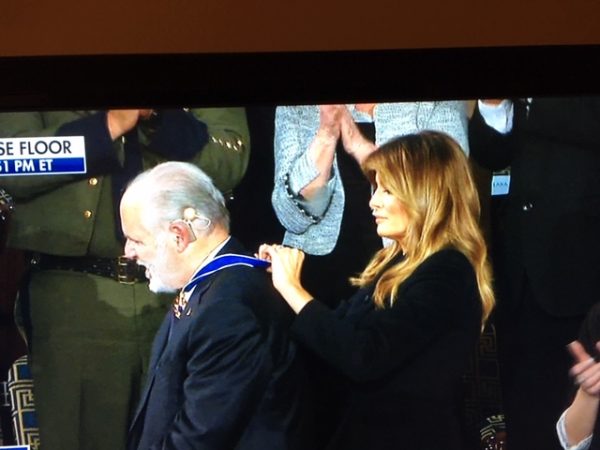 President Donald J. Trump ended his speech by saying:  “America is a land of heroes, where greatness is born, destinies forged and legends come alive.   America is a vast frontier with the toughest and fiercest men and women.  We tamed the wilderness and settled the Wild West.  We vanquished tyranny, raised skyscrapers, and our ancestors built the most exceptional Republic to exist in human history.

“This is our glorious and magnificent inheritance.  The American pioneers, our pathfinders settled the Old World and built a New World where we embrace the eternal truth that everyone is made equal by the hand of Almighty God.

“America is the place where anything can happen, where anyone can rise and here on this land, on this soil, on this continent, the most incredible dreams come true. This nation is our canvas.  This country is our masterpiece.  We see unlimited frontiers to be explored.  Our most thrilling stories are still untold.   The American age, the American epic, the American adventure has just begun.  Our spirit is young.  My fellow Americans, the best is yet to come.”

The Democratic response to the State of the Union was given by 48-year-old Michigan Governor Gretchen Whitmer who referenced her experiences serving as a mother and governor; highlighted the accomplishment of Democrats; and attacked Republicans and the President as thinking he was “above the law” (mentioning the impeachment hearings concluding in the U.S. Senate on Wednesday).

Brought tears to my eyes. A great speech. America is coming back. Our youth are once again believing they can do better than their parents.