Stepping into the Unknown — Oxnard’s Homeless

Lang Martinez and Bonnie Rouda interacted with the people of Oxnard Plaza Park on August 29th, 2019, and made an offer to everyone they spoke to; they invited people without homes to come and stay at a sober living house, free of charge.

What was the response? Were there any takers?

Lang and I have been discussing homelessness and addiction issues for the last three months just about every day. The only days we have not conversed about these issues are the days when I didn’t answer his phone calls. Sometimes I just needed a break. Lang is an intense guy, he is very passionate about sharing his sobriety with those who would benefit most from following in his footsteps.

We regularly discuss the various solutions to the growing homeless population in Oxnard and Pt. Hueneme and Ventura County, in general. And we regularly engage with homeless people and offer them services. One thing we both agree on is that what brings a person to that crucial moment of breaking a habit of using and abusing substances is often a mystery. Many people who have become sober report that God made it happen. Well, there are as many ways to speak about God as there are people on this planet. It is often difficult for people to articulate what they mean by God. Often, people stop using and they say something like, “I just quit, some power made me stop, it felt like a higher power but I have never been religious, so I don’t know what to call it.” 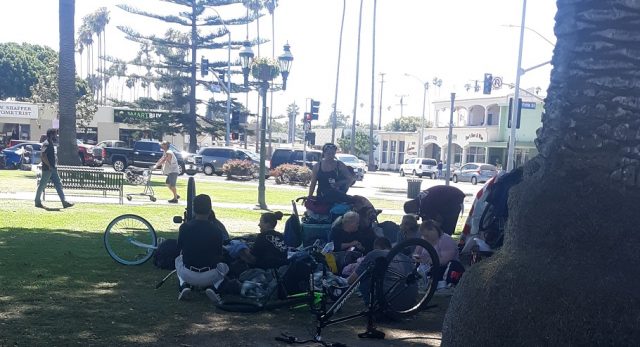 At Plaza Park, Lang and Bonnie spoke with a mother and daughter who were both addicted to heroin. They invited them both to get in the car and drive to the sober living house and leave their life of using behind. The daughter was pregnant, she was concerned about her baby. It looked like she wanted to go with them but she was overwhelmed with emotion. She just felt more comfortable staying with what is known to her instead of stepping into what would be the unknown.

Often, we hear people speak about God as if God is known but I have found that it is not possible to know God within the limitations of the human mind with all of its biases, opinions, beliefs, conditioned responses and memories. It takes stepping out of this mind-set and looking through eyes that are not certain and not clinging to ideas. Whatever God is, we can’t know in the same way that we know how to spell a word or do a math problem. God is not an equation that we can work out. God always defies all of our limitations and is constantly revealing deeper and deeper layers of who we truly are as human beings. 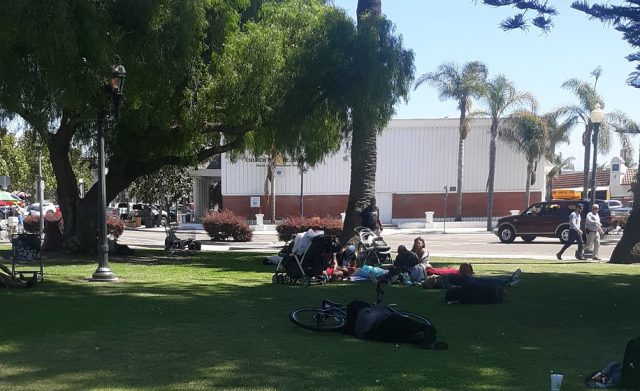 Lang and Bonnie spoke to a man in his twenties named Patrick. He seemed interested in getting sober and appeared willing to try living in this sober living home that would provide a bed and three meals a day and assistance with finding a job. He asked Lang to call his Father and see if he would come to the park and support him in making this decision.

It turns out that when the father arrived, the son was able to get some money from him, and decided not to go to the sober living house that day. Or did his drug use decide for him? Does a drug addict really have the ability to utilize their free choice? It is a question that addiction researchers have been asking for decades.

Do we choose to step into the unknown? Do we walk off the cliff or are we pushed or pulled by an unseen force? Even if you are a self-described atheist, you have to confess, if you are sincere, that you don’t always know what is making you do the things you do.

Bonnie and Lang didn’t find any takers in the park. No one would step into that car, into the unknown. The life on the streets, with its daily search for the next high, with all its struggles and hardships must have seemed easier than trying something new. Why do we resist the unknown so strongly. What are we afraid of?

I say we because one thing just about everyone has in common with those living on the streets and using drugs is the tendency to do the same thing day in and day out. An addiction to a routine is something that we all can relate to.

Did Lang and Bonnie fail that day in Plaza Park? Did Patrick and the mother and daughter and the thirty or so others that Lang and Bonnie spoke to that day, fail? I don’t think so, because every time one of us performs a meaningful action or tries something new in the spirit of discovery, we succeed, no matter what the outcome.

As the Bhagavad Gita, an ancient Hindu text says, “You have the right to work, but never to the fruit of work. You should never engage in action for the sake of reward, nor should you long for inaction.” 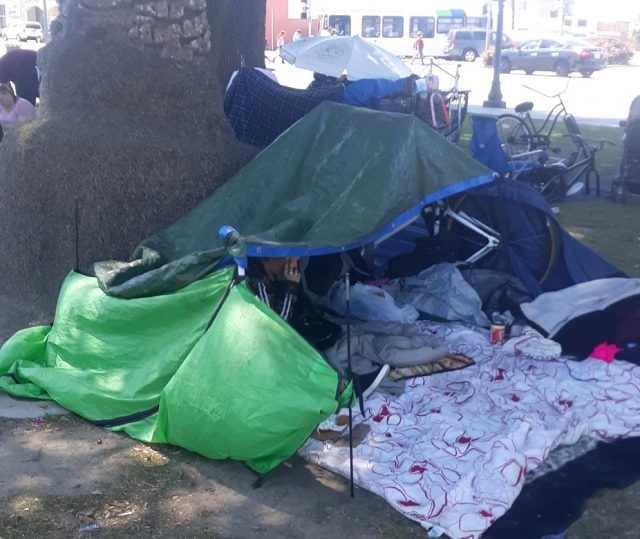 Rafael Stoneman has worked as a tree trimmer,  an active duty soldier,  a mental health recovery worker,  a junk hauler,  a care-giver,  and currently is a homeless veterans outreach worker for the nonprofit Gold Coast Veterans Foundation.  He has a B.S. in Psychology from University of La Verne and a certificate in Addiction Counseling from Oxnard College.  He is the author of a column in the Acorn newspaper titled: Veterans Connection. Rafael has three sons,  ages 16, 22, and 25.

Rafael has lived in Ojai for most of the last 23 years,  with the exception of 1 year in Joshua Tree,  1 year in Seoul, South Korea on the Yongson Army base,  2 years on the Ft.  Irwin Army base, and two years in Oxnard.

“As the Bhagavad Gita, an ancient Hindu text says, “You have the right to work, but never to the fruit of work. You should never engage in action for the sake of reward, nor should you long for inaction.” ”

This might help explain why the vast majority of Hindus live in abject poverty. Peoples’ efforts to improve themselves and society have resulted in incredible improvements in the health and welfare of people. In America, even the poorest Citizens can get food, medical care and even shelter, if they are willing to follow some rules. Yes, you and I have discussed that this does still not address morality or happiness. I think you pointed out that a lot of the poor masses in India seem to be pretty happy.
That’s another discussion.

Thanks, Lang.
The following link has more information about detox screening and various sober living houses in Ventura:
County.https://www.venturafamilymed.org/rotations/alcohol-drug-rehab-services

No Kris there was no missing link ? You said that you work at a treatment center? Just so you know soberlivings should require that you get a medical clearance before entry . You working in a rehab facility should know depending what on what you are using the hospital will give the resident something for detoxification, that is the purpose of getting a medical clearance ? I’ve been involved in recovery since 1991 started at Tarzan’s Treatment Center. To give all you some more information the Oxnard rescue mission will also allow someone to bring in medication to help them detox as well. My name is Lang Martinez and I would like to personally thank my dear friend and he doesn’t know it , but he is also someone who mentors me through his knowledge because I don’t know everything ? Thank you Rafeal

If you are talking to a drug addict you aren’t having a conversation with a person who is thinking clearly. You wouldn’t walk into a bar at closing time and expect to have a clear conversation with a drunk. Therefore they will not make a level decision to change their path. I used to volunteer at a shelter in the 90s this is different the drugs are different the situation is a higher degree of difficulty something new needs to be tried.

Yes, that is true Ted. However, if you speak to someone in a bar at closing time and give them a card with your phone number on it, the next day or three days later or even a month later, they may call you when they are in a sober moment and ask for your help.
The point is providing opportunities to people to reach out when they come to that point where they start looking into getting off the drug.

This was great outreach but the one missing link was detox service. People will not take offers knowing what they face is withdraw Illness.
A bed and meal will not convince people to experience the prolonged pain of wd symptoms.
I guarantee if offers included guided wd treatment someone would of taken the offer.
I work at a rehab I know the stories most include the fact that they kept using to avoid the withdraw.

Kris, Lang let me know that before anyone comes to the sober living that they require a medical clearance. He would bring them to VCMC to get this clearance. The hospital provides different medications to help with detox from various drugs. This is also a requirement for entry at the Oxnard Rescue Mission. This way, while the person is at the sober living house, they have medications to help them detox from drugs.

CHopkins.
Where was that “Jesus bus” going? Where did everyone live that was part of that group?
Thanks for your comment.

RAcevedo:
Thanks for reading the article and commenting. Once the individual realizes he or she needs to change, it often takes a village to support that individual in making that change. That is where we as a society often come up short.

An amazingly simple and powerful piece of reporting about what is real and true. It made me remember how when I was young and in a communal Jesus group, we used to drive around in a bus and call to people walking by, “Jesus loves you. Get on the bus!” We usually had a few jump on. I guess it was a more innocent time, meaning the illusions were more dense and no one knew what they were risking by just imagining that they could try something new and different than where they seemed to be at the moment. Now the fear is so thick on the ground, only the truly brave and the truly crazy will take a chance.

An individual MUST want to change in order to break negative behaviors. The hard part is getting the individual to realize he needs to change.