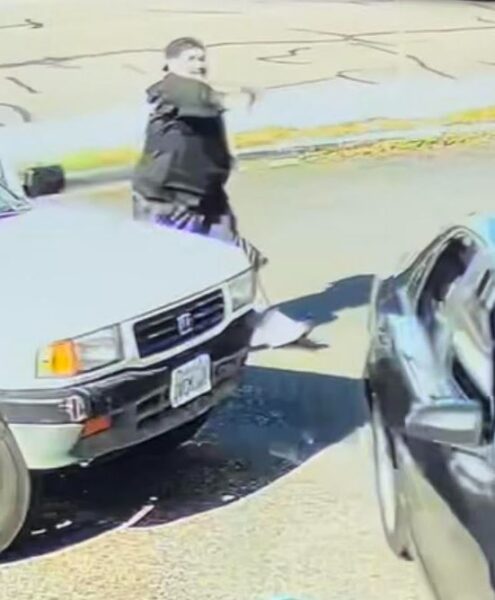 On November 4th, at approximately 11:29 a.m., officers responded to the 3500 blk. of Saviers Rd. in regards to a shooting that had just occurred.  Witnesses reported seeing a white sport utility vehicle pull in behind another occupied vehicle.  The driver, later identified as suspect Ixta, exited the sport utility vehicle and fired several rounds from a handgun at the occupied vehicle.  The occupants in the victim vehicle fled the area and Ixta fled the area as well.  Investigators from the Violent Crimes Unit responded to the scene and took over the investigation.

Investigators conducted follow up and located the vehicle in the 100 blk. of South McKinley Ave.  At approximately 2:30 p.m. Ixta was observed entering the vehicle and driving away northbound.  Officers observed Ixta park in the 100 blk. of North Bonita Ave. and attempted to make contact with him.  As officers exited their vehicle, Ixta quickly accelerated from the curb and a short pursuit ensued.  As Ixta drove north in the west alley of the 100 blk. of South McKinley, his vehicle collided with another police vehicle causing minor damage.  Ixta attempted to flee on foot but was apprehended after a taser deployment.

Ixta was treated for his injuries and booked for assault with a deadly weapon (for the shooting on Saviers Rd.), felony reckless evading, and for resisting arrest.  Ixta was also arrested for an outstanding warrant from the U.S. Marshall’s Office.  Ixta is a documented Oxnard criminal street gang member.

The Oxnard Police Department’s Violent Crimes Unit, and Special Enforcement Unit are committed to reducing gang crimes and gun violence in the City of Oxnard through the strict enforcement of laws specifically targeting known, active gang members residing in the city.  Anyone with information regarding this case or other criminal activity is encouraged to contact the Oxnard Police Department at (805) 385-7600, or online via the Oxnard Police Department’s website:  www.oxnardpd.org, and clicking on Report Suspicious Activity.   You can remain anonymous if you choose to do so.  You can remain anonymous by calling the Ventura County Crime Stoppers at (800) 222-8477. You can also visit this site: www.venturacountycrimestoppers.org to submit a tip via text or email.  Booking photographs for adult felony arrest available on the department website:  www.oxnardpd.org under crime & safety, and booking / call logs.