By Dr. Wen Chen (A U.S. citizen originally from the People’s Republic of China)

I was born and raised in Communist China. My parents survived the great famine in the 1950s when 30 million Chinese died from starvation. Then they survived the great cultural revolution in the 1960s and 70s when two million intellectuals died from the persecution by the party. In 1989, the party killed 10,000 students and citizens during the Tiananmen Massacre.

Just 10 years later, the party started massive persecution towards Falun Gong. It is a traditional Chinese meditation practice based on the principle “Truthfulness-Compassion-Tolerance” that attracted 70 million Chinese people to practice. Unfortunately, the Communist Party cannot tolerate any independent thinking to gain popularity.

Millions of Falun Gong practitioners were detained, tortured and became victims of the forced organ harvesting. In the U.S., it takes years to wait for matching organs from someone who dies from accidents. But Chinese hospitals promise to find donors within days because they already have millions of Falun Gong practitioners, Christians, and Uighurs in detention centers, with blood types documented.

The U.S. Congress and at least 10 U.S. States passed non-binding resolutions condemning the forced organ harvesting in China to raise public awareness towards the atrocities in Communist China. In 2017, California State Senator Joe Anderson proposed a resolution CA-SJR-10 against the forced organ harvesting in China. However, the Chinese consulate in San Francisco called California State Senate President Kevin de Leon to block that resolution. As a result, de Leon blocked the resolution. That is just an example of how the Chinese Communist Party can call our elected officials and tell them what to do.

The Chinese government has been heavily infiltrating the U.S. media, education system, and entertainment industries to spread their propaganda to Americans without you realizing it. Their English TV programs broadcast in six channels in the U.S. Their newspapers are distributed by mainstream media like the New York Times, Washington Post, and Wall Street Journal, as advertisements and insertions. This April, the Los Angeles Times carried 11 pages of insertions paid by the Chinese government to praise the Communist Party’s work during the pandemic.

Confucius Institute is a free Chinese program provided by Communist China to over 100 U.S. universities, including Stanford and UCLA, as well as over 500 high schools. Through Confucius Institute and Confucius Classroom, these universities and high schools, taught students a distorted history of China and the U.S. They taught students that Americans started the Korean War to invade North Korea and would have invaded China. They completely blocked topics like: Tibet, Taiwan, Tiananmen Massacre and Falun Gong.

Communist China has been a center of an alliance of totalitarian regimes. China has been the main sponsor of North Korea by providing 90 percent of its trade, including nuclear material and technology. China provides technology to Iran. Much of the technology came from the U.S. via trade or theft.

China’s belt and road initiative involve 152 developing countries by providing high-interest loans for their infrastructure, getting these countries into financial traps, gradually turning them into colonies of China. That is why China has massive control of the United Nations. Four out of 15 United Nations agencies are led by China. The other 11 agencies have China holding key positions. That is why the World Health Organization copied everything the Chinese government said during the pandemic.

We are in a critical moment to protect our freedom from being taken away. We are not fighting alone. Chinese people are awakening. There are hundreds of brave Chinese human rights lawyers like Gao Zhisheng and Chen Guancheng. Over 364 million Chinese openly denounced the Communist Party on a website maintained in the U.S.

The Chinese Communist Party will collapse because Chinese people are abandoning Communism. As a Chinese American, I call for actions from my fellow Americans to step out. It is time to end Communism all over the world.

(Editor’s Note: Dr. Wen Chen received her doctorate in biology at The California Institute of Technology in Pasadena in 2002. Since 2012, Dr. Wen has given over 300 presentations about Chinese culture, history and human rights. This presentation was made by zoom during an immigrant panel hosted by the Election Integrity Project-Ca at a fundraiser on Sept. 24 at the Moorpark Eden Gardens. Dr. Chen can be contacted at: [email protected]. This is the first of a series of stories on immigrants speaking out against communism/socialism/Marxism.) 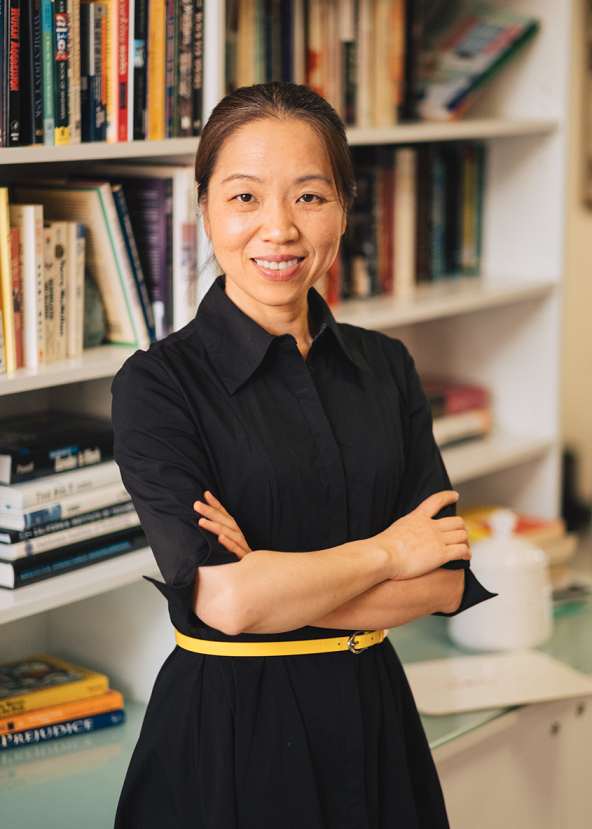 Dr. Wen Chen was born in China at the end of the Great Cultural Revolution. Being victims of the horrific atrocity that killed two million intellectuals and destroyed traditional Chinese culture, Wen’s parents had mixed feelings about her education. Despite their discouragement, Wen eventually won a national prize at a science competition when she was 16. Hence, she was accepted into a top university for undergraduate study. In 1994, Wen came to the U.S. for graduate school and received a doctorate in Biology at the California Institute of Technology in 2000. Because of her personal experience of being brainwashed in China, she decided to be a voice for the voiceless. Since 2012, she has given over 300 presentations to community organizations about Chinese culture, history, and human rights.

Every ‘federal’ effort to end communism inside America has failed — The House UnAmerican Activities Committee (HUAC) was treasonously ended in 1969, the most populous Democrat-run state is still being communized, and the U.S. Government counterintelligence framework is non-existent.

Consider also what the late (KGB defector) Yuri Bezmenov had to say about this 37 years ago.

Communism will threaten freedom for years to come. Fight it locally!

the world must stop the CCP. and its present president ( XI JINPING ) before he and the communist party destroy WORLD FREEDOM ! FOR EVER , or untill it brings WORLD WAR III.

Thank you for this article, having traveled many places within China, much of what you say is very obvious. From Falun Gong Work details to the temples destroyed during the cultural revolution. To see the Chinese shopkeepers inside of buildings With the Tibetan shopkeepers on a blanket outside. And so much more!