The End of America?

So-called political analysts, who can’t seem to correctly analyze anything, constantly ask why our country is going through such turmoil. They describe what they see, but can’t or won’t answer the question ‘why?’

It started with Agenda 21

Why is it so many people have never heard of Agenda 21, Agenda 2030 or The Great Reset when it is all in plain sight? Our country and the world have been groomed for decades for this time in history.

It started with Agenda 21 in 1992 with 179 countries signing on to this UN endeavor. That was the beginning political framework for the current Agenda 2030. Its priorities were the control of all land, water, and air on the planet to ‘save the planet.’ Anyone can see that covers everything. The major economic agenda for Agenda 21 is that all people will move out of rural areas and into the big cities. They claim it will be better for the environment. No cars traveling here and there using up energy, emitting carbon. When fully adopted, this document will negate any authority our Constitution may have in America. In short, Agenda 21 will mean the end of national sovereignty (currency, laws and borders), no property rights, the end of privacy, no free enterprise, the end of gun rights and self defense protections…exactly opposite of the Trump program.

Agenda 2030, a supplement to Agenda 21, with the entirety called The Great Reset

Agenda 2030, a supplement to Agenda 21, with the entirety called The Great Reset, adopted by the UN in 2015, is a 15 year plan “for people, the planet and prosperity.” In their own words, it is described as “…a universal call to action to end poverty, protect the planet and improve the lives and prospects of everyone, everywhere.” The plan has been adopted by 194 countries including the Vatican. Lenin, Hitler, Mao, Castro and Pol Pot promised the same thing, but about 200 million people got in the way and had to be eliminated.

Agenda 2030 will be a continuation of the control we have seen in the past 18 months, but greatly expanded. Besides being a bioterrorist attack, COVID-19 was a diversion and an experiment in population control. There will be forced closures and the end of non-sustainable businesses, especially rural, property ownership, and agriculture via heavy climate regulation. Rural living provides too much freedom. The elites want to trap everyone in major cities where they can be controlled. They have learned much this past year and plan on using it. Remember, they have less than 9 years to complete the project.

You will hear the term ‘Sustainable Development’ (SD) a lot. It sounds reasonable on the surface, but it is not what people think. SD refers to control of the means of production…Communism. According to their own treaties, all livestock will have to be eliminated (Bio-Diversity Treaty). There will be no more private farms (private farms have been disappearing for decades, many of them bought by the likes of Gates). The production of all food, energy, resources, and availability and treatment of water will be centrally controlled. People will no longer own anything. They will rent everything they need. All to combat climate change. Of course, the stakeholders, the elites, the narcissistic sociopaths, will still own their properties.

How will they get local government and the people to go along with Agenda 2030?…desperation and funding!

None of these organizations on the local level will display Agenda 21 or Agenda 2030. They will be disguised as organizations to help communities ‘sustain healthy development.’ They are integral to the UN structure.

Don’t forget, the Chinese Communist Party (CCP) is helping the globalists by working to destabilize our country, whether in concert with or in spite of Agenda 2030. If our country becomes lost to us and they are working in concert, when will the CCP and the global elites reach cross-purposes? Does anyone believe Russia and China and even North Korea are going to just hand their respective countries to Bill Gates and his buddies? I do believe we are dumb enough to do it, especially with the current administration.

How will they get local government and the people to go along with Agenda 2030?…desperation and funding! In many areas of the country, mostly Democrat areas, living conditions and crime will become impossible to deal with. Local governments will call for federal intervention (military or national police). Police departments, schools, local governments, especially in rural areas will no longer get any federal funding unless they cooperate. If anyone speaks to a government official or the county sheriff, ask them if they depend on federal money?

People will ask… How will they steal my property?

People will ask… How will they steal my property? They won’t. They will pass regulations and legislation making it impossible for you to keep your homes… higher property taxes, energy costs, new and existing structure regulations that will be financially prohibitive, etc. Suppose your gas or credit cards don’t work anymore? How can they end my privacy? If there is no more cash, they is no more privacy. All transactions will be monitored. If there is resistance, there is always the military, currently being vetted to remove all patriots.

The illustration, below,  says much. The end of a great nation-state. Anyone studying the map will ask, how can we get 335 million people in those permitted areas? The bad news for us is, they won’t have to. Many eminent physicians, scientists and observers are beginning to see COVID-19 and the vaccines for what they are. Phase one and two of a de-population scheme. The Biden administration as well as other countries have plans to go door to door to coerce people into getting the shot. Does that sound even remotely normal?

Only light blue areas will be populated 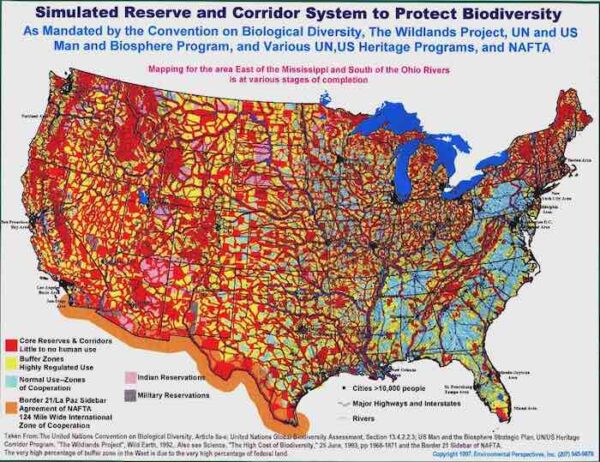 But, there are solutions. The preferred remedy should be in the courts if there is any courage remaining for those unwilling to disregard their oaths. To abandon or actively levy war against our Constitution, especially to benefit a foreign entity is, by itself, an act of high treason, punishable by life in prison, or preferably a reinstatement of the death penalty. That would include an attack on our electoral system, a grave assault on our very system of government and our republic! Justices have interpreted our Constitution and decided the most absurd cases with much less. If the justices are in fear for their lives and the lives of their families, is this how we are to live from now on?

If not, state and local governments need to adopt a strict nullification policy. Any laws or regulations not adhering to the Constitution of the United States will be deemed null and void. Another possible solution is in the hands of state legislatures. They need to declare their states to be Free States or Sanctuary States for Freedom. The Left has in recent past created precedent for sanctuary status with the law choosing not to interfere. Who would criticize the state that renews their declaration that the Constitution is the law of the land?

No matter the direction, it will get nasty.

What made us the greatest nation on earth is… One Nation Under God. We have been sustained by our Creator, but that blessing is revocable depending on what we do with our freedom and the burden of responsibility that goes with it. That responsibility includes the courage to remain free.

Everything pertaining to The Great Reset in this article can be verified on the UN website as well as many others.

Ray DiLorenzo — Bio and ArchivesRay DiLorenzo is a career pilot having retired after 22 years as a contract fire pilot with the California Department of Forestry (Cal-Fire).  He is presently affiliated with Stand Up America US Foundation founded by Maj. Gen. Paul E. Vallely (Ret).