Oxnard are we passing up an important and unique opportunity to become the ethnically and culturally congruent art/culture leaders we should and can be? If so, Why? In the past two years we have lost important cultural institutions like the Carnegie Museum, the Children’s Museum, The Acuna Art Gallery/Cafe on A, the PAC is on life support, they have all been sacrifice to the Gods of profit.  Where do the children (everyone) play, create and learn if there are few, if any, cultural destinations that are left in Oxnard? 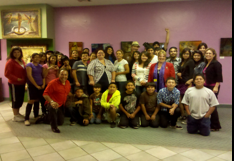 Additionally, in the past two years a number of city staff were fired and their positions eliminated in order to reconcile a $9.2million dollar deficit that was caused primarily by negligent successive administrations kicking the “fiscal deficit” can down the road and the fabricated “safety” fears of the spooked electorate. So to placate the fearful voting residents, the city council has continued to fund unabated the police and the fire departments. Not one police officer or fire fighter in Oxnard lost their jobs during the last round of painful budgetary cuts that effected all the other departments. Oxnard is well on its way to becoming the fortified and militarized city many of us in the community feared would become a reality due to the incessant fear mongering stoked by the usual “safety” suspects.

Recently in listening and witnessing the many heartfelt and pain filled comments and testimony made by the various residents and Oxnard city employees, I am left with one overriding impression of an orchestrated conspiracy of deception, betrayal and lies being played out by the self-serving city council on the backs of mostly Latino and vulnerable interest groups (employees, non-profits and programs) in our community. The mastermind of the conspiracy is the new city manager, who clearly has been given absolute power and authority to remake the city of Oxnard in his oblique “outsider” image.

I have dealt directly and personally with the city manager. The city manager in dealing with me and my business partner, Dr. Debbie DeVries, has impressed me as a guy that is at once bored with “the little people”, faints interests, double talks, breaks promises, and has little to no tolerance for “small ideas” that do not coincide with his grand vision.

Here is what I mean. Early in 2019 our Acuna Art Collective, a partnership of artist, educators, union folks, crafts persons, students, activists and social services providers re-submitted a professional proposal of FREE and best practices services, classes, activities and community enhancement projects that we would provide to the residents of Oxnard in exchange for the temporary use of the Children’s Gull Wings Museum or the old Social Security Building. We felt that this was the culmination of over 2-3 years of community based hard work and negotiations with the previous 4 – 5 previous city mangers to make use of abandoned city buildings.

Dr. DeVries and I met with the new city manager. We presented our proposal and ideas.  He immediately dismissed our proposal as “too small” and indicated to us that he had rejected all the existing proposals that had been previously solicited by the past city mangers office. It was abundantly clear that he had his own vision and he would import all of his “development team” without the input of the community. Like a couple of cockroaches we were summarily smashed. Oddly Nguyen indicated that he “wanted to help relocate us (the Acuna Art Collective)” somewhere downtown in an abandoned building. That was the end of June, 2019 and the “negotiations” have come to a standstill and the city manager is not returning any of the calls that we have made to his office for the past 5 months.

In the past two weeks, I spoke to stunned city staff from the PAC who indicated to me that they had received dismissal notices without the benefit of a courtesy call or a visit from the city manager. The entire city has now been witness to the incredible pain and suffering of the most venerable and least “protected” employees who are summarily being dismissed on executive whim.

On December 5, 2019 I received notice from the city that our three year effort to secure the vacant city property that once housed the old Children’s Wing Museum, was turned down, and another non-profit agency would be awarded the occupancy of the city building we fought for such a long period of time. Finally, on January 6, 2020 I was advised by the city that we at the Art Acuna Collective/The Café on A has until February 12, 2020 to remove all of our “materials.” So without some type of last minute community or celestial intervention, our two decade old run as the arts and cultural “heart and soul” of the Oxnard community will be over.