WASHINGTON, D.C—The national narrative of both the left and the national media is that the Jan. 6, 2021 protest at the U.S. Capitol was an attempted coup—an insurrection against democracy. This narrative is challenged by The Epoch Times documentary “The Real Story of Jan. 6” that focuses more on the police response, including “use of force” against protesters by law enforcement expert Stan Kephart. 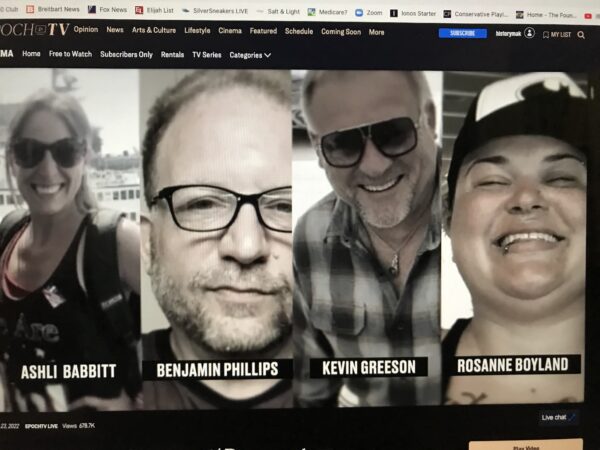 Video clips show the shooting of 35-year-old Ashli Babbitt by US Capitol Police Lieutenant Michael Byrd and the deaths of three other supporters of President Donald J. Trump: including the death of Rosanne Boyland who video clips show beaten by policewoman Lila Morris before being trampled (not dying from a drug overdose as reported by the media); and the mysterious deaths of Benjamin Phillips and Kevin Greeson.

It examines the human impacts of Jan. 6, including the suicide of one defendant and the long pretrial imprisonment of dozens of others. It also investigates claims that some of the attacks on the Capitol and police were carried out by unindicted suspicious actors.

To provide new clarity on the events of that day, EpochTV and The Epoch Times have produced a documentary, “The Real Story of Jan. 6,” which premiered on Friday, July 22. The film is narrated by Joshua Philipp, host of “Crossroads” on EpochTV and a senior investigative reporter at The Epoch Times.

Jasper Fakkert, editor-in-chief of The Epoch Times, said: “There has been a narrative perpetuated about January 6 that omits many of the facts about what happened that day. With in-depth interviews and exclusive video footage, we take an objective look at the issues, the people, and the impacts of the events.”

Was The New York Times accurate in reporting the suicide of Metropolitan Police Officer Jeffrey Smith as a “line-of-duty” death? Where is the justice for the J6 protestors (such as Jake Lang with at least 865 people charged) in prisons in the District of Columbia and across the country that were let into the Capitol by law enforcement and now are in solitary confinement (without due process)?

Why the raids on the homes of President Trump supporters? (35 FBI raids made of Trump supporters on Sept. 8: see link: https://www.lifesitenews.com/news/steve-bannon-fbi-raids-35-trump-allies-as-biden-admin-steps-up-attacks-on-maga-republicans/).

Why the lack of arrests during the Antifa and Black Lives Matter looting, rioting, chaos during six months of 2020? (See story posted Jan. 9, 2021 by Stacey Matthews on the Legal Insurrection website created in 2008 by Cornell Law School professor William A. Jacobson: https://legalinsurrection.com/2021/01/flashback-2020-six-months-of-antifa-blm-looting-rioting-and-chaos/.)

“The Real Story of Jan. 6” is now available on demand for free until the end of September. To watch the documentary, click TheRealStoryOfJan6.com or go to this link: (https://www.theepochtimes.com/mkt_app/the-real-story-of-jan-6-documentary_4596670.html.)

Mess around an find out. Those traitors/protestors should all be imprisoned. If you want to overthrow a duly elected president (Biden), then you are an insurrectionist, and a traitor. Ashli should have followed the authorities commands, and if she had she would not be dead.

May the spirit of Jesus be with all of them.