The Replication of the Father Serra Statue: a Volunteer Community Project by Catherine Antolino Mervyn 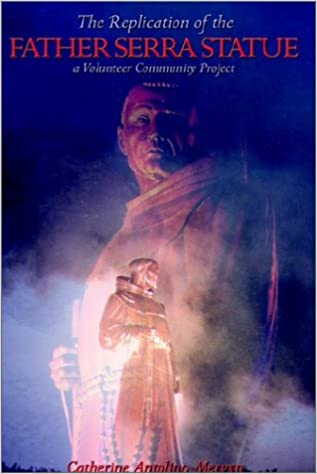 Given the recent local focus on the Father Junipero Serra statue here in Ventura, much discussion and vigorous debate is centered on his life and times. Lesser known, however, is the actual history of the statue as a work of art itself, its background and its impact on the local environment.  Wouldn’t it be helpful to have such a resource for learning about the Serra statue?

In 2002, Catherine Mervyn authored The Replication of the Father Serra Statue: A Community Volunteer Project. It is an invaluable source for those interested in a fascinating and detailed history chronicling the creating of the three versions of the Serra Statue: cement; wood; bronze.

In this 65 page volume, complete with quotes, photos and citations, Mervyn, an immigrant herself, helps the reader get a closer view of the artistry and the artists, the unique methods, the outstanding individuals as well as the overwhelming community involvement which in the author’s words contributed “to how these three statues grew out of the heart of the people of the ‘City by the Sea’”.

Regarding the cement statue of Serra, the author describes the tireless efforts made by the chosen sculptor, John Palo Kangas, commissioned in 1935 as part of the Works Progress Administration, in order “to create a statue of the legendary Franciscan missionary, Father Junipero Serra, the founder of the first nine of California’s 21 historic missions” (p. 2).

Kangas was “anxious to know his subject intimately,” so he often traveled from Los Angeles to Santa Barbara and San Buenaventura to learn more about Serra, seeking the expert knowledge of priests and religious. Needing a model for Serra’s face, he chose a local Meiners Oaks man. The completed ‘reverse’ clay mold for the statue was taken to an “imposing permanent location in the front of the County Courthouse [now Ventura City Hall] overlooking the ocean.” There, the wet concrete was poured into the mold “right on location” (p.6).

The Dedication Ceremony for this Serra ‘cement’ (concrete) version was held in November, 1937. Notables present were California Governor, Frank F. Merriam; Serra biographer and historian, Father Maynard J. Geiger; and Adolpho Ortega, descendant of Captain Francisco Ortega, who had accompanied Serra some 155 years earlier when he founded Mission San Buenaventura. The location, in the author’s description “became a favorite gathering place for fiestas, weddings and a variety of social affairs” (p.7). The statue, itself, was considered “a historical landmark affirming the history of the city’s origin” (p.12).

The Bronze version of Serra Statue came about because the cement statue, in place for 51 years, had deteriorated with weathering, some vandalism, and the actions taken to undo both. The author details the efforts in 1983 of Councilman Russell Burns, a mechanical engineer by profession, to remedy the statue’s structural problems and the studies he undertook to determine the best course of action.

Since this would be an expensive undertaking, funding would be vital. Funding activities were conducted with a fervor and by many. A ‘Father Serra Trust Fund’ was set up by Mayor John Sullard. Other fundraising committees were also formed. A local artist, Charles Kubilos, created a Serra miniature clay model. This was reproduced in bronze and given to generous donors. Radio hosts, the local paper, schools and others enthusiastically helped in raising money so that by October 20, 1988, the “incredible sum of $102,119.50 had been collected with more to come later” (p.20).

Councilman Burns, “experienced in large artworks, believed that a wooden likeness of the Serra statue could capture the spirit of the original.” Burns’ idea was that the “wooden form could then be used for a pattern for making the mold to cast a bronze statue” and this is where the concept “from concrete to wood to bronze” (p.13) originated. The author calls attention to the fact that this makes the City of San Buenaventura unique among all the places that have statues of Serra.

In 1986, the San Buenaventura City Council motioned to “endeavor to replace a crumbling 50 year old statue of Junipero Serra” (p. 14). A December 21, 1986 Star Free Press article is cited: “. . . City Council happens to include someone with artistic credentials, Russ Burns. He is an artist who specializes in large works. His enthusiastic involvement offers assurance that Father Serra will be preserved faithfully and artistically” (p.14). Burns’ plan at that time included the input of The Channel Harbor Woodcarvers Association. The Serra statue would be “replicated in wood” with the carving done in three stages: “an apprentice would ‘rough’ the pieces, a carver would add more details and a master carver would complete the work” (p. 15).

Among other unique artistic methods employed, Mervyn describes the use of an intaglio, or reverse mold, pointing out that this was not unlike one used to complete the Statue of Liberty by Frederic Auguste Bartholdi, the difference being that “Bartholdi was creating an original statue, Burns was replicating one–in wood” (p. 26).

With the rough form approaching 1200 pounds, the wood statue carving started April, 1987. As work proceeded, problems with calculations were encountered and solved through the ingenuity of team members Jack Holman, a retired firefighter and Joe Haugen, a retired oil field worker among others.

A member of the Channel Islands Carvers Guild, Wilbur Rubottom, a professional carver, was appointed Master Carver and carved the head and face of the statue, having carved “at least three Serra faces before being pleased with his work” (p.36). A group of 30 volunteer carvers originally was narrowed down to about 7 with Rubottom overseeing all the carving work.

Noteworthy is that this was recognized as such a “specialized activity” that it became a tourist attraction, with visitors from all over the US and foreign countries who were “impressed by the artistry, even wondering where such artists had been obtained” (p.37). The carvers, as well, featured their fine craft at the Ventura County Fair, where the gigantic wood block had been brought.

The carvers as a group expressed their “wanting to leave a legacy for their families by preserving a part of San Buenaventura’s history” (p.38). The author discusses in detail the contribution of the skilled carver, Judy Monzo, the only woman on the team from Camarillo. She chose to carve Serra’s rosary beads. This was her reason for volunteering and for making the extra effort to drive long distances to and from work.

When carving was finished July 21, 1987, Master Carver Rubottom “recorded 10,000 plus of donated work hours by all the carvers” with the masterpiece weighing over 800 pounds and ready as a pattern for casting in bronze (p. 39).

As to where the wood-carving would be displayed after the bronze casting, a local radio contest invited listeners to vote: The winner’s spot was the choice of the City Hall atrium. This was the same spot originally chosen by the Ventura Arts Council (p. 41).

According to Mervyn, this location led to a disagreement with the Candelaria Indian Council since they had rock paintings on-display at that same location. Eventually, it was agreed that “both the rock paintings and the wood statue did belong together and would both be displayed in the same location” (p. 44).

The wood statue, after its use in the bronze casting, was moved using a crane furnished at “no cost by Leon Zermino of the Oilfield Service and Trucking Company.” There in the City Hall atrium the “life-like form of Father Serra stands in harmony, beside the colorful Chumash rock paintings” (p. 45). It was dedicated in June of 1988.

Mervyn next gives an account of the removal of the concrete Serra Statue — a feat in itself with a cost of $10,000. Much discussion is given to the location as to where this old statue would be housed. In the interim, it was to be stored in the crane company’s location on Ventura Avenue. Considerations of future plans for it included the possibility of it being displayed at an indoor location: the to-be-realized County Agricultural Museum in the City of Camarillo.

In June of 1988, bronze casting came next. The bid by The California Sculpture Center at the College of the Desert in Palm Desert was accepted. Molds from the wood statue for bronze casting used an “ancient ‘lost-wax’” method. Detailed descriptions are given. Twenty-two pieces of bronze together would compose the statue. Further processes were applied for completion, finishing with a protective patina coating. The San Buenaventura City Council authorized funds to for a concrete pedestal “overlaid with black granite from the Andes Mountains in South America” (p.59).

The completed bronze statue was installed over five days. The location “is the exact spot where the original concrete statue had stood for 51 years” (p. 63). The “unveiling and dedication” day was October 20, 1989. The special evening featured music along with many dignitaries and a Boys and Girl Scouts of America color guard. 500 guests attended with Mayor Monahan adding that in “addition to their own remarkable accomplishments,” . . . the statue represents our community’s obsession and dedication to preserve our heritage” (p. 63).

The author concludes, stating the the Serra Statues “stand witness to a people’s dedication and passion for their historical past and faith in their future” (p. 64).

Removing a statue doesnt erase history, it is a foolish idea to consider and a monumental waste of taxpayer funds if the City caves to a small number of overly sensitive crybabies. If the offended are that serious, let them come up with 100% of the money to move Father Serra to the mission. Until then, let them cry to their mommies and leave the adults alone.