There Ain’t No Such Thing as a “Must-Pass” Bill

“Congress,” The Hill reports, “is barreling toward a veto showdown with President Trump over the mammoth must-pass annual defense policy bill.” At issue: The annual National Defense Authorization Act, which as usual has little to do with actual defense.

Trump says he’ll veto the NDAA if it requires military bases named after Confederate generals to be re-named, as Congress desires.

He also says he’ll veto the bill if it doesn’t include his desired “reform” to Section 230 of the Communications Decency Act, giving government power to control social media platforms’ content moderation policies. 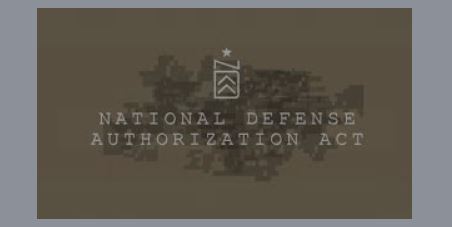 The main purpose of the annual NDAA is to feed hundreds of billions of dollars of corporate welfare into the maw of the military-industrial complex we’ve been ruled by since World War Two.

A secondary feature, often utilized by Congress, and occasionally by presidents using the threat of veto, is to use its supposed “must-pass” status as a shoehorn for forcing controversial items into law.

This year, we’ve got a two-fer on that secondary feature, and a game of chicken between President Trump and Congress.

In his four years in office, Trump has vetoed eight bills, fewer than any president since Warren G. Harding. Unless this NDAA fight goes south on him, he’s also set to become the first president since Lyndon Baines Johnson to finish his presidency without Congress overriding at least one veto.

Who’s going to blink? Who knows?

Congress’s heavy gun in the NDAA fight is the pretense, put on by politicians and parroted by media, that military spending bills are “must-pass” material.  But they aren’t.

Unlike “mandatory” spending such as Social Security, which occurs automatically absent congressional action to stop it, “defense” spending is “discretionary.”

Neither the Constitution nor any existing legislation requires the US government to spend one thin dime on the armed forces. In fact, the Constitution forbids Congress to fund the army for more than two years at a time (the idea being that standing armies are dangerous).

Presidents Jimmy Carter, Ronald Reagan, George H.W. Bush, Bill Clinton, and George W. Bush all vetoed annual “defense” authorizations. The world didn’t end when they did it, and the world won’t end if Trump does it.

But it’s a silly fight, this one.

Congress, or the president, or both, should take a stand against spending many times as much taxpayer money on the military as could possibly be justified by any rational definition of “defense.” A fight over how much to cut from future NDAAs, and how quickly to cut it, would be a fight actually worth having.