“Your message couldn’t be sent because it includes content that other people on Facebook have reported as abusive.”

Facebook censored me again this week, and that little quote above was all the explanation I received—which is, of course, no explanation. I received it literally within seconds of composing my blog post and attempting to share it on Facebook.

What “other people” even had time to read the post, let alone report it as abusive? Facebook’s message is a lie. What they really mean is that their robot, employing mindless algorithms because it’s only a machine and can’t think, got its “censor” button pushed by some word or phrase I used. I suspect it must have been the words “Democrat doofus.”

Meanwhile, in the totally uncensored world of left-wing nooze media, NBC Nooze ran an opinion piece by some other doofus who said “Heterosexuality is just not working anymore” and women should abandon it. She tapped Jeffrey Epstein and the Dayton and El Paso shooters to represent the heterosexual male population, billions of us, on the earth. No hate here.

The term that springs to my mind is “in your face.” 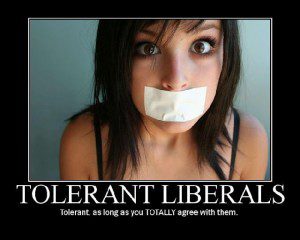 For almost all of my lifetime, Democrats and other liberals masqueraded as reasonable, moderate, fundamentally sane and decent people. We often disagreed with them, we thought their recommended policies misguided, and the policies they managed to carry out were widely unsuccessful—but we didn’t think they were out to trash the country.

We were wrong. They have shred that pretense. Now they just come out with stuff that’s off the wall, just plain evil, or both.

A simple rule of thumb: whatever a liberal proposes, just ask, “What if everybody did it?” And if the answer is “The human race goes extinct,” or “The country collapses into violence and chaos,” or “We lose our liberty,” that means it’s something that should not be done. Examples are easy to understand. If all women reject heterosexuality, we go extinct. If our country’s borders are erased, we get chaos. If we start throwing people into prison for disbelieving in Man-Made Climate Change, or using the wrong pronouns, we lose our liberty.

Oh—and they also attack you in the street, if you wear a MAGA hat. Not a single Democrat in Congress has found any fault in this. Looks like they’re okay with it.

The censorship is getting more and more blatant, and it’s always a one-way street. Leftist loons swarmed onto my wife’s Facebook page to call for the violent death of our president. No hate there. Does Facebook censor them? Visit any of their Facebook pages (as we have just done), and you’ll find President Trump in particular and non-leftist Americans in general called a lot worse names than “doofus.” Apparently no one ever reports that stuff as “abusive.”

Why do these people not bother to pretend they’re fair or reasonable? What do they know—or think they know—that tells them they don’t have to?

Has God saddled them with a delusion that will lead to their total defeat, and their end, at least temporarily, as a viable political movement? If only. But they’re acting now as if they believe they’re invincible, and I would very much like to know what makes them think so. Have they devised a secret fool-proof scheme for voter fraud? Or some sure-fire means of suppressing Republican votes? I mean, Hubert Humphrey had more than his share of loopy liberal ideas, but he didn’t trot them out for public view. Why have today’s liberals cast away their masks, and act like what normal people think of them simply doesn’t matter anymore?

We need to know.

Meanwhile, just in case you wanted to know, the “Democrat doofus” featured in my censored blog post was Alexandria Ocasio-Cortez, who says we can pay for socialism and the Green New Deal just by printing more money. You can find the post on my blog, Aug. 26.

I have discussed these and other issues throughout the week on my blog, http://leeduigon.com/ . Stop in for a visit (before I get censored again); a single click will take you there. My articles can also be found at www.chalcedon.edu/ .