This Military Member Saw An American Flag On The Ground. Here’s What He Did Next

Video footage captured an anonymous man in a military service uniform carefully folding up an American flag that had torn and fallen to the ground Tuesday.

The scene was captured by Hope Mills, North Carolina, resident Frankie Grandstaff’s home security video camera, according to WRAL.com. The video shows that the man was dressed in fatigues and folded the flag in the proper style, and Grandstaff said he wants to find the anonymous man and thank him for the act.

“It’s just the random act of kindness,” Grandstaff told WRAL.com. “He didn’t need to do that. It was raining. The weather wasn’t good. He could have just acted like he didn’t see it and kept on driving.” (RELATED: Exclusive: Housing Companies Subject Military Families To Serious Illness From Disgusting Housing Conditions, Military Wives Say) 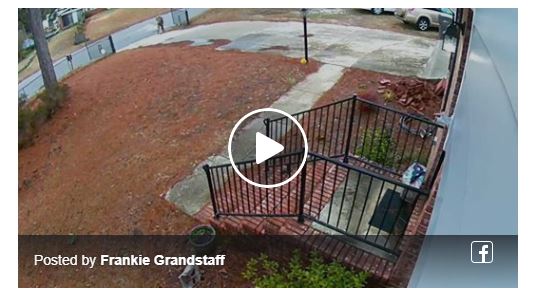 The North Carolina man, who recently moved to a home near military base Ft. Bragg, had been flying the flag at half-staff to honor paratroopers killed in Afghanistan. Grandstaff said he flies the flag out of appreciation for the American flag and for the United States military.

“With everything that’s going on today in the world, I just think it’s good to make sure we recognize the good people,” he told WRAL.com.

Grandstaff has a message for the anonymous military member: “Thank you for taking care of my flag, and thank you for your service.”

“There’s still good people out there,” he said.