Thousands to come to D.C. on Dec. 12 to protest election fraud and corruption: Faith and Patriot groups join together nationwide to pray, seek election integrity

WASHINGTON, D.C.—Thousands will flock to the Nation’s Capitol on Dec. 12th at 12 noon to pray and seek election integrity as the Jericho March joins with the Stop the Steal national movement which will also hold events at six battleground state capitols: Atlanta, Georgia; Harrisburg, Pennsylvania; Lansing, Michigan; Madison, Wisconsin; Carson City, Nevada; and Phoenix, Arizona plus 44 other States including two in California (Sacramento at 12 noon and at the Huntington Beach Pier from 2-5 p.m.).

Jericho Marches will take place at the U.S. Capitol, Supreme Court, and Department of Justice. This will be followed by a Prayer Rally on the National Mall calling the nation to “Unified Prayer and Civic Engagement for Election Integrity, Transparency, and Reform.”

Participants will march around the D.C. landmarks seven times “to send a very clear message” to national and state leaders as they hear patriots and people of faith “roar in support of election integrity, transparency, and reform.”

This Jericho March will begin at 9:30 a.m. (EST) with the blowing of the shofar (an ancient musical horn used for Jewish religious purposes) culminating in a massive national peaceful prayer rally protest at the National Mall from noon to 4 p.m. EST with 45 speakers and musicians scheduled. Theme is “Let the Church Roar!” The event emcee is Eric Metaxas.

“We believe God is calling us to unify. Our partnership reflects patriots and people of faith coming together as one,” said Robert Weaver, evangelical co-founder of the Jericho March. “Jericho March and Stop the Steal will march, pray and protest together, and speak from a unified stage. We will call upon the Holy Spirit to fill this space while we act in faith.

“Our prayer army is bringing our case before the Courts of Heaven, the Supreme Court, and the court of public opinion seeking truth and justice in this election,” said Arina Gross, Catholic co-founder of the Jericho March. “The blatant fraud and corruption in this election is overwhelming and it cries out to God for justice. We the People demand answers and accountability. We serve a mighty God who can restore truth and justice in our land.”

“Stop the Steal has brought out hundreds of thousands of patriots and believers in all 50 state capitols, each and every Saturday at noon, as we did in DC weeks ago. We did that by word-of-mouth and God’s favor,” said Ali Alexander, the chief strategist behind the Stop the steal protests happening across the nation.

“At our state protests, we’re grateful for the Jericho March prayer warriors marching around the perimeter of the state capitols. It’s been so moving. Let me be clear: this is not just a political battle for the soul of our nation. We are not just battling against flesh and blood, but against evil forces at play. We will march on D.C. and pray that God exposes all of the darkness and corruption behind this fraud.”

Jericho March states: “it’s mission is to call upon people of faith to prayer, fasting, and peaceful protest in the service of God, and in defense of life, liberty, and justice. Jericho March is comprised of Judeo-Christians collectively praying to God to intercede, expose a particular darkness, and bring about justice.

Those praying as they circle the nation’s landmarks seven times will pray for the walls of corruption and election fraud to fall down, just as Joshua and the Israelites walked around the walls of a corrupt Jericho before those walls came tumbling down.

A “One National Under God” (ONUG) grassroots rally will be held at the Supreme Court at 10 a.m. on Saturday with Lt. General Mike Flynn.  Ed Martin, President of Eagle Forum Education and Legal Defense Fund as well as Women for Trump (from Virginia, California, Michigan, Pennsylvania, Ohio, and New Jersey) are sponsoring the Supreme Court program. To register for the ONUG event click here (Jericho Marchers will continue praying around the Supreme Court during this time). To register for the other activities for the day go to: www.jerichomarch.org. 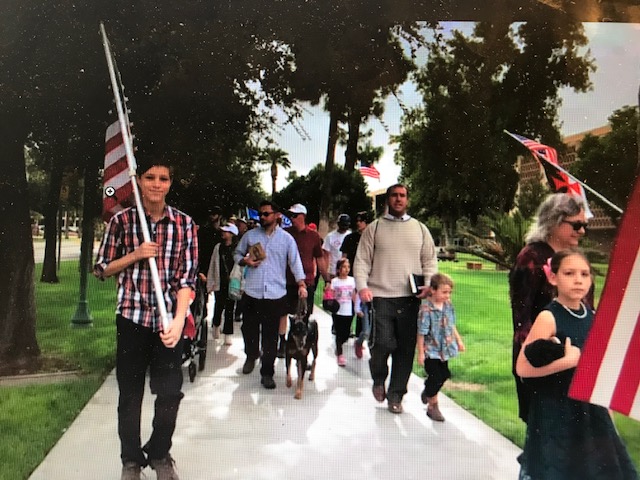