The State of California enacted DPR legislation in 2010 and has subsequently enlisted consultants, advisors and staff to craft regulations and along the way solicit public commentary. Below are some major dates in the process:

There were five public meetings where staff and consultants spoke and citizens could ask questions.

Because the Expert Panel Feasibility Report validated the feasibility of DPR in California, it is worthwhile to step back and review this document in detail.
Starting at pdf page 39, after the acknowledgements and lists of participants, the Executive Summary makes a strong statement:
After a yearlong investigation, the Expert Panel finds it is feasible for the State of California to develop and implement a uniform set of water recycling criteria for DPR that would incorporate a level of public health protection as good as or better than what is currently provided in California by conventional drinking water supplies, indirect potable reuse (IPR) systems using groundwater replenishment, and proposed IPR projects using surface water augmentation.
For purposes of discussion, it is important to understand this diagram. The first two rows show examples of IPR (Indirect Potable Reuse) and the second two rows show examples of DPR (Direct Potable Reuse): 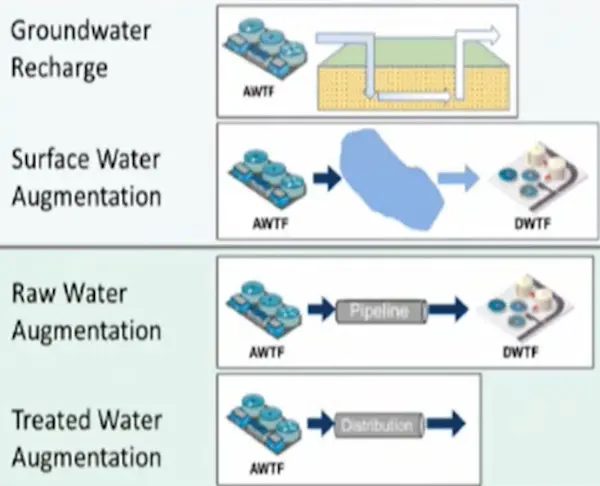 Rows three and four are defined in the Expert Panel Report as follows on pdf page 31.

Direct potable reuse producing advanced treated water
For the first form of DPR, “advanced treated water” produced in an advanced water treatment facility (AWTF) is introduced into the raw water supply immediately upstream of a drinking water treatment facility (DWTF), where it then undergoes surface water treatment before entering the drinking water distribution system. The only two DPR projects in the United States that have been permitted to-date use this form of DPR, both in Texas (i.e., the Big Spring Raw Water Production Facility operated by the Colorado River Municipal Water District and the DPR Project used to produce an emergency water supply for the City of Wichita Falls).

Direct potable reuse producing finished drinking water
For the second form of DPR, “finished water” produced in an AWTF that also is permitted as a DWTF (and meets the requirements of the Surface Water Treatment Rule) is introduced directly into a drinking water distribution system. Finished water is expected to meet all federal, state, and local regulatory requirements for a DWTF.
Noteworthy about these definitions is that the AWTF (Advanced Water Treatment Facility) such as the one at Oxnard will have to undergo changes to become a certified drinking water treatment facility
(DWTF). Oxnard just received a grant to implement an aquifer recharge which would be considered an IPR project. Read grant.

How Much Recycled Water to Expect?

As a result of indoor and outdoor water uses and other nonresidential municipal consumptive uses, neither DPR nor IPR can replace all current potable water demands, nor can all collected wastewater be used as part of a potable reuse project. Based on a recent estimate, roughly 30 percent of all wastewater collected in California – or about 50 percent of the water now discharged to the ocean –could be used by 2020 for either DPR or IPR projects (Raucher and Tchobanoglous, 2014). The actual amount of water available will vary by region, depending on site-specific factors, such as discharge locations for wastewater effluents (Tchobanoglous et al., 2015). source: pdf page 60

Public health protection requires that microbiological pathogens and chemicals in wastewater be removed to the extent practical before discharge to the environment (as commonly practiced throughout the world) or for other uses (e.g., non-potable and potable reuse). Generally, low concentrations of non-pathogenic microorganisms are not harmful; therefore, a public health goal is not to eliminate all chemicals and microorganisms, but rather to limit human exposure to concentrations of chemicals and pathogens that may be harmful to human health. Such maximum allowable concentrations of potentially harmful agents are established as standards. In the United States, these standards for drinking water are known as “maximum contaminant levels” (MCLs) for chemicals and as “log10 reduction values” (LRVs) for pathogenic microorganisms…While conventional wastewater treatment in California provides a wastewater effluent quality that is suitable for discharge to surface water and subsequent use, treated wastewater effluents still contain a wide range of naturally occurring and anthropogenic trace organic and inorganic contaminants, residual nutrients, total dissolved solids (TDS), residual heavy metals, and pathogens mixed in with those that occur in receiving waters (Drewes and Khan, 2011). What is important is regulating important constituents that may result in adverse human health impacts. Determining which constituents to regulate can be challenging, but has been done for both unplanned potable reuse and planned IPR. The possibility of doing the same for DPR is considered in this report. pdf page 60

Currently, most DPR projects under consideration in California include reverse osmosis as part of the treatment train. In part, this decision has been driven by the success of recently constructed IPR projects (e.g., the Orange County Water District’s Groundwater Replenishment Facility and West Basin Municipal Water District’s Edward C. Little Water Recycling Facility) and the availability of an ocean outfall to discharge reverse osmosis concentrate. Furthermore, the ability of reverse osmosis to remove dissolved ions is viewed by most water utilities as a worthwhile benefit, especially in locations where source waters may contain total dissolved solids at concentrations near or above the secondary drinking water standard (i.e., 500 mg/L). pdf page 119

This section should be read slowly. The Expert Panel does not minimize potential risks. This is the longest section of the report and includes graphs and much data. Expert Panel Report

On slide 11 of the recent presentation, the Expert Panel makes this statement:

“While the focus of the Panel review is to determine if the proposed regulation provides adequate public health protection relative to the risk posed by the water being produced, there is a significant concern about unintended consequences — particularly related to excessive energy consumption and carbon footprint.”

Eventually this decade of work will be codified into legislation and procedures. Undoubtedly there will be pilot projects. Scottsdale, Arizona had a pilot DPR project but it was shuttered until the State of Arizona can finish the regulations. With California leading the way, many states will be able to avail themselves of this massive research.
For information on author sherylhamlin.com

Soon Pay per FLUSH, Put in your dollars or credit card

On page 236 of the Expert Panel report, Figure 8.1 shows seven different treatment trains for the four different scenarios in the image above. “The design of DPR treatment trains in California likely will build upon the long track record of IPR schemes for subsurface spreading augmented by additional treatment barriers; therefore, the Expert Panel decided to contrast the IPR scheme for subsurface spreading to five potential DPR alternatives (Figure 8.1). Four of these alternatives contain integrated membrane systems (i.e., microfiltration and reverse osmosis), as well as an advanced oxidation process (AOP). Example 1 represents a treatment scheme that involves an environmental buffer with a shorter reservoir retention time than required in the proposed criteria for IPR using surface water augmentation (SWA). Examples 2 to 4 consider different combinations of treatment processes. Example 5 represents a treatment train that does not rely on reverse osmosis”

There were two different Expert Panels. The charge of the 2016 expert panel as outlined in SB 918 (amended by SB 322) was completed, and the panel was disbanded. The State Water Board convened a panel as required by AB 574 in 2021 for the purposes outlined in AB 574 whose report was summarized in the Powerpoint slides.