The two leaders met to discuss the strategic cooperation between the two countries on both trade and immigration.

“The relationship between the United States and Mexico has never been closer than it is right now,” Trump said at the Rose Garden before signing a Joint Declaration with his counterpart. The Declaration aims to bolster economic and security cooperation.

He noted that “people were betting against” a good relationship between both leaders.

“Each of us was elected on the pledge to fight corruption, return power to the people, and put the interests of our countries first,” Trump said.

Trump called the agreement “the largest, fairest, and most advanced” and said that it would “bring countless jobs from overseas, back to North America.”

“Our countries will be very big beneficiaries. We are already seeing the fruits because it started,” he said.

The USMCA comes at a crucial time since it may encourage businesses to bring their production closer to home and advance economic decoupling from China. The pandemic has further accelerated the need to reshore to the United States, or nearshore to Mexico and Canada, supply lines, according to experts.

“This agreement is a great option to produce, create jobs, and foster trade without having to go so far away from our homes, cities, states, and nations,” Lopez Obrador said.

He pitched Mexico, saying his country has an “extremely valuable” asset, which is its “very young, creative, and responsible labor force.”

The agreement contains new “rules of origin” on cars, which incentivize production in North America. It also promotes the use of high-wage labor, which is expected to make U.S. and Canadian workers more competitive vis-a-vis Mexican workers.

This is the Mexican president’s first foreign visit since he took office in late 2018. The 66-year-old leftist president traveled to Washington on a packed commercial plane, according to a Twitter post, showing him sitting in coach and wearing a facemask.

Lopez Obrador published a book titled “Listen, Trump” before his election in 2018 and labeled Trump as “erratic and arrogant” in his book. After he took office, however, both leaders publicly praised one another.

Trump touted Lopez Obrador for his cooperation in stopping the illicit cross border flow of drugs, guns, cash, and contraband, as well as human trafficking.

“We’re forging critical partnerships across the western hemisphere to combat the cartels and the smugglers, and to ensure safe, humane, and lawful migration. And we’ve been helped greatly by Mexico,” he said.

Lopez Obrador came under criticism in his country for traveling to Washington before the U.S. election, as some feared that he would appear to be supporting Trump in his reelection campaign.

Lopez said Trump had been “increasingly respectful” to Mexicans despite “ideological differences” and “insults” that had happened in the past.

He touted Trump’s support during the pandemic and for providing the critical medical equipment needed.

“You have not tried to treat us as a colony; on the contrary, you have honored our condition as an independent nation. That’s why I’m here to express to the people of the United States that their President has behaved with us with kindness and respect,” he said towards the end of his speech.

Before his meeting with Trump, Lopez Obrador laid wreaths at the Abraham Lincoln Memorial and Benito Juárez Statue, “historical figures who symbolize the best of politics and the struggle for liberty in both nations,” according to the Mexican Embassy in Washington. 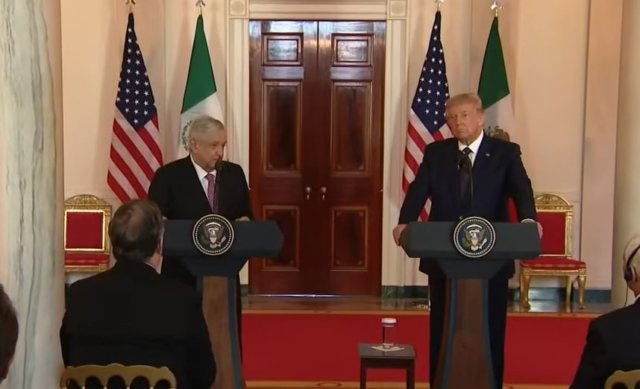