President Donald Trump says China should face “consequences” if it was knowingly responsible for the coronavirus becoming a pandemic.

Trump made the comments at a White House press briefing Saturday, further escalating his criticism of China and the World Health Organization. He softened his critique by saying that if China had assisted the pandemic by “mistake,” then it was less punishable. The U.S. intelligence community reportedly concluded in mid-March that China had been falsifying its data on coronavirus cases and deaths, but the report also notably said Beijing likely did not know the true numbers.

Secretary of State Mike Pompeo said at a press conference in early April that “now is not the time for retribution” with regard to China. He said the U.S. would conduct a review of China’s handling of the virus after the pandemic has passed. (RELATED: Top WHO Official Won Election With China’s Help) 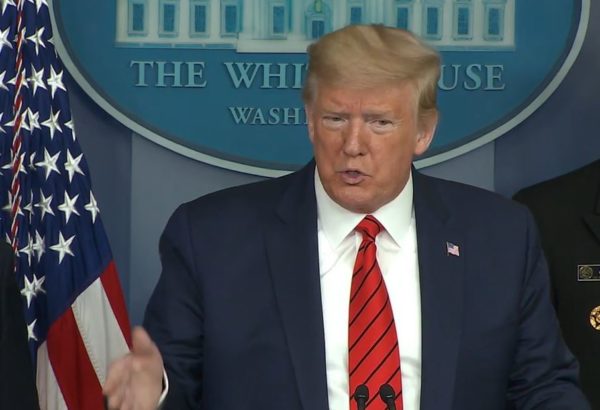 A report from the Associated Press last week found that Chinese government officials determined the coronavirus was likely to become a nationwide pandemic on January 14, but waited six days to warn its citizens and the world. A March 11 study found that global cases could have been 66% lower had China acted and warned the world just one week earlier.

The Chinese Communist Party’s official tally claims roughly 3,500 people died of the virus in Wuhan, but evidence indicates the total was actually more than 40,000.

Republican Missouri Sen. Josh Hawley has gone out ahead of the president, placing blame for the global pandemic directly on the Chinese government. He has introduced legislation that would allow U.S. citizens to sue the Chinese government for coronavirus damages and would establish a State Department task force to lead an international investigation into China with the goal of compelling restitution. (RELATED: US Ramps Up Crackdown On China’s Spying Efforts During Coronavirus)

“There is overwhelming evidence that the Chinese Communist Party’s lies, deceit, and incompetence caused COVID-19 to transform from a local disease outbreak into a global pandemic,” Hawley said in a statement. “We need an international investigation to learn the full extent of the damage the CCP has inflicted on the world and then we need to empower Americans and other victims around the world to recover damages. The CCP unleashed this pandemic. They must be held accountable to their victims.”