Trump: ‘We’re Going To Be Doing It Again, A Third Time’ 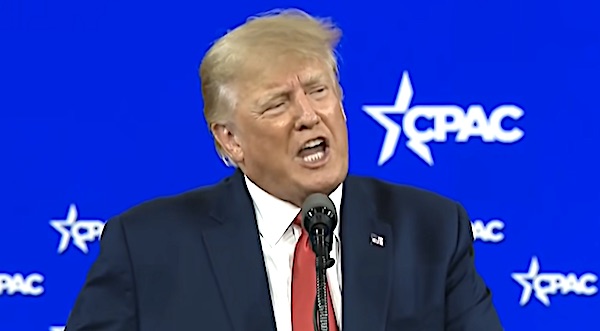 ORLANDO, Florida — Former President Donald Trump made a serious hint in his speech Saturday at CPAC, the Conservative Political Action Conference, that he’ll be running for president again in 2024.

“We are a sleeping giant,” Trump said, speaking to America’s adversaries, such as Russia and China.

“They’re going to find out the hard way starting on Nov. 8, and then even more so on November 2024, they will find out like never before. We did it twice and we’ll do it again, we’re going to be doing it again, a third time,” he said, an apparent reference to his upcoming third campaign for the presidency.

“2022 will be the year that millions of every day citizens stand up to the leftwing fascists, and they will continue and we will all continue together to make America great again. We can build it back again quickly and even better than before.”

He explained how American heritage is in peril, and that it’s a fragile thing, before praising his own presidency.

“I think I did a great job,” he opined, prompting the he crowd to erupt in a chant of “four more years.”

“The importance of the president when I look at what’s happening in our country today … but just a wrong word, or a yarn, or going to sleep very early like at 4 o’clock, it’s just such an important, so important, psychologically so important for our country,” he said, making it clear he was alluding to Joe Biden.

“You have to portray a strength to the outside world otherwise they’re going to walk all over you and that’s what they’re doing now.”

Trump, who now resides two hours south of Orlando in the town of Palm Beach, indicated even the worst five American presidents combined did not have the same negative impact as the first 13 months of Biden and his officials.

“The country has lost its self-confidence,” he said. “Our great military has been humiliated” by the departure from Afghanistan, and he had intense concern for the war in Europe.

“As everyone understands, this horrific disaster would never have happened if our election were not rigged and I had been the president.”

“I remain the only president in the 21st century under whom Russia did not invade another country,” Trump said, as chants of “USA” erupted again.

“We always very simply put America first, is the answer,” Trump said. Peace in the Middle East, peace in Europe, and China realizing it could not take advantage of the U.S. were among the accomplishments Trump listed during his time in the Oval Office.

“Under our administration, Russia respected America just like every other country respected America, and they really respected us a lot. And now Joe Biden is seen as weak, and I hate to say it,” he said, because he wants Biden to do well.

Trump blasted allied sanctions against Russia as a weak response.

“The real problem is that our leaders are dumb. Dumb, so dumb,” he said, “and they so far allowed him to get away with this travesty, this assault on humanity. Putin is playing Biden like a drum.”

Three times, I thought he was talking about divorces, or ex wives. If the loser wants to lose again, then go ahead. I’m pretty sure he’s not going to run, as it would make him look worse of a loser then he already is, but he is doing this just to get the maga crowds money.