Andrew Yang’s small but solid polling in the Democratic Party’s 2020 nomination race shows that “Universal Basic Income” has gone from a fringe idea to an idea with a foothold in the popular consciousness.

Supporters of a basic income span the political spectrum and the economic upheavals of the 21st century — especially fears that automation will increasingly replace human workers — are likely to fuel its journey to the center of policy discussions over the next few years.

A guaranteed income for the masses isn’t here, but it may well be coming. That’s a bad thing. 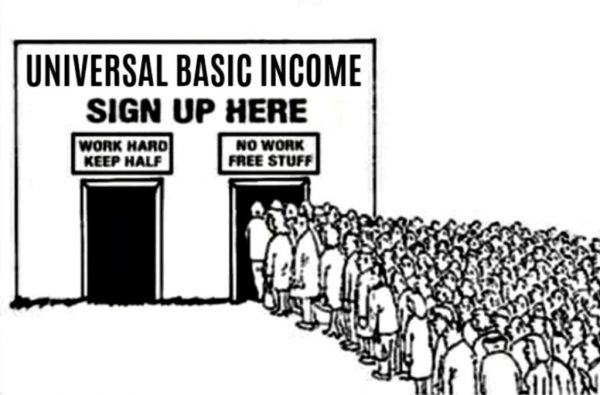 Let’s assume that the problems a UBI seeks to address are real, vexing, and intractable: That this generation of automation, unlike past iterations, will destroy more jobs than it creates and lower rather than raise wages.

Let’s also assume that a universal income guarantee at, say, the poverty line would cost less and address those problems more efficiently  than expanded versions of existing welfare programs.

Those assumptions, correct or not, leave out one major problem that a UBI would create rather than solve. The problem, put simply, is that a Universal Basic Income would quickly turn into an iron-fisted tool of social and individual control by the entity writing those monthly checks (the government).

A Universal Basic Income wouldn’t be “universal.” Some exclusions (for example, prison inmates) would almost certainly be baked into it from the start. Others would quickly follow. Are you a FORMER felon? Is your name on a sex offender registry or no-fly list? Are you behind on child support or late filing a tax return? Do you make “too much” money above the UBI? Did you fail a random drug test?

Suppose you don’t fall into any of those categories. You’re an upright citizen. The UBI hits your bank account reliably every month. You come to depend on it, even if you’re otherwise employed. It takes the edge off poverty or covers the little extras you’ve become accustomed to.

Then your paymasters in Washington announce that unless Policy X is implemented, the UBI will regrettably have to be eliminated, or cut, or a cost-of-living increase skipped.

Policy X might be one of the exclusions mentioned above. Or it might be something seemingly only tenuously, if at all, related to the UBI itself. A trade war, even a shooting war, premised on an economic downturn being another country’s “fault.” Another housing crash, necessitating another bailout of banks and investment houses with cockamamie trading policies.  You name it, politicians will figure out a way to weaponize an income guarantee to get you on their side of it.

So, do you Support Policy X and the politicians advocating for it, or risk that monthly income guarantee to support what you really think is right?

Maybe you’re a person of principle. Maybe you’ll stand up for what’s right even if it costs you. But will your neighbors?

The cost of a UBI would be total state power. And that would be a terrible deal to take.