Two days after we reported that “China Junk Bond Yields Hit All Time High As Property Default Contagion Spreads”, the index of Chinese junk bond yields has hit a fresh all time high, rising above 21% on Thursday… 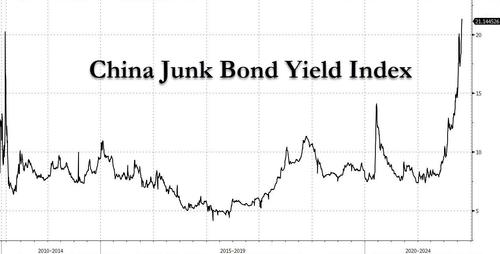 … as the contagion vortex in the Chinese property sector claimed yet another victim when Chinese property developer Kaisa Group Holdings – the 25th largest developer in the country by home sales – said on Thursday its finance unit had missed a payment on a wealth management product (WMP), adding to worries about a cash crunch at the debt-strapped company.

The Shenzhen-based developer, which provides a guarantee for the wealth management product, said in a statement it is facing “unprecedented liquidity pressure” amid credit-rating downgrades and a “harsh environment in the property market.”

The Hong Kong-listed shares of Kaisa, which is one of the industry’s biggest borrowers in international bond markets and has a market value of about $1 billion, plunged more than 15% on Thursday to an all-time low; the stock is down almost 50% in the past month. 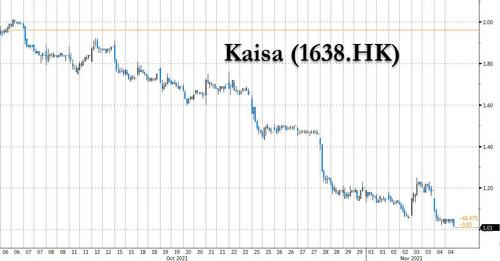 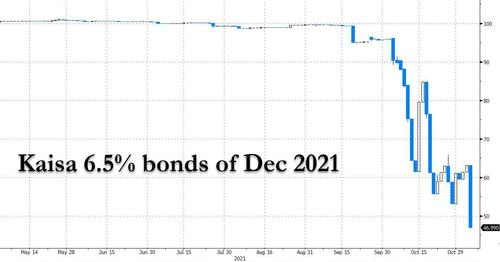 Similar to Evergrande, Kaisa said it was raising funds to ease the pressure by measures including speeding up asset sales. One can only hope that it is far more successful in this endeavor than Evergrande whose liquidation attempts have so far been disastrous.

Kaisa’s troubles come amid concerns about a deepening liquidity crisis in the Chinese property sector, with a string of offshore debt defaults, credit rating downgrades, and sell offs in the developers’ shares and bonds in recent weeks. Meanwhile, amid the confusion over the outcome of the current solvency scare, the Chinese property market continues to lock up and we reported earlier this week that China’s top 100 developers saw new-home sales fall 32% from a year earlier in October, after a similar slump in September.

More than 80% of the developers saw property sales decline year over year last month, with 44 developers recording drops of more than 30% and 37 developers saw home sales decline on both month-on-month and year-on-year basis, the latest data showed prompting analysts to say it’s almost certain that the housing market will cool further and the outlook for developers’ sales in the fourth quarter is not optimistic.

While Kaisa is one of China’s smaller developers, it is unique in that it has the most offshore debt coming due over the next year of any Chinese developer after embattled Evergrande, which as everyone knows by now (and ignores) is reeling under more than $300 billion in liabilities. Kaisa has around $3.2 billion in offshore senior notes due in the next 12 months, with the next maturity worth $400 million falling on Dec. 7. It has coupon payments totaling over $59 million due on Nov. 11 and Nov. 12. Absent a massive dollar injection from Beijing, the company will never make these payments.

According to Reuters, Shenzhen regulators will hold a meeting on Friday to discuss liquidity issues at Kaisa and its defaulted peer Fantasia, local media Cailianshe reported. Last month, we reported that Fantasia had defaulted on an offshore bond tranche, news which shocked the market and sent its 7.5% bond of 2021 from par to 75 in one day.

Kaisa senior management including group chairman Kwok Ying Ching spoke to WMP investors in a meeting on Thursday, the developer’s statement said, to discuss payment solutions. Two investors told Reuters that Kaisa said during the meeting it has a total outstanding 12.79 billion yuan ($2.00 billion) in principal and interest, and it plans to pay it back gradually. But investors have pushed back strongly, they added.

Kaisa, similar to most other heavily-indebted Chinese property developers and conglomerates such as Evergrande, issued high-yielding WMPs to mostly mom-and-pop investors offering far higher yields – a popular way of borrowing that sidesteps stringent government lending restrictions. Evergrande’s wealth arm, which raised more than 100 billion yuan in the past five years, missed its payments earlier this year, leading to protests by investors in several cities in September who feared they will never get their money back. Evergrande narrowly averted a default for the second time last week, but faces another hard deadline on Nov. 10 for more than $148 million in coupon payments that had been due on Oct. 11.

Separately, smaller player Yango Group, which is seeking to exchange its dollar bonds to help avoid a default, said it has reached an agreement with investors in China to extend principal payments on asset-backed securities.

At the same time, Shanghai Shimao Co said it will limit investor participation in seven Shanghai-traded bonds starting Friday. It added it sees no major events that seriously harm its repayment ability. nvestor concerns about the broadening impact of the liquidity crunch sparked heavy selling of other Chinese developers’ bonds in onshore markets on Thursday.

The worsening health of China’s $5 trillion property sector, a major economic growth driver, is testing Beijing’s resolve to press on with painful structural reforms such as reducing high debt levels in the sector.

AS we said on Tuesday, the lack of government assistance means much more pain is in store: after at least four builders defaulted last month, limited access to refinancing channels has threatened a wave of delinquencies: some of China’s worst-performing dollar junk bond borrowers have some $2 billion in onshore and offshore bond payments due November. And as investors focus on who files next, here are the developers with payments due this week:

The stock price is taking a dump. And I will, too.