As the United States Postal Service (USPS) warned of possible “significant” delays in handling mail-in ballots ahead of the November election, there have been calls for private delivery companies to help manage absentee balloting, an idea both FedEx and UPS have rejected.

“State ballots must be postmarked to be considered valid and only the USPS has lawful postmarking status. Therefore UPS, FedEx, and other private parties cannot technically be involved in shipping ballots,” UPS said in a statement.

FedEx told Reuters it can accept individual ballots, but encouraged customers using FedEx to “closely review their state’s guidelines on absentee voting and deadlines for ballots or related election documents.”

Another obstacle to companies like FedEx and UPS getting involved in vote-by-mail processes is that, according to Tammy Patrick, a former Arizona election official, it could technically be considered ballot harvesting. Also called ballot collection, this is when other people collect voters’ ballots and submit them on their behalf, a practice that has drawn concerns of fraud, although evidence of this is scant.

The Heritage Foundation, a conservative think tank that has long raised the alarm about the dangers of mail-in ballot fraud, publishes a database of all reported instances of election fraud, dating back to 1979. It lists only 1,277 “proven instances of voter fraud,” though the organization’s communications manager told The Epoch Times in an emailed statement that “the database is only intended to represent a small sampling of the types of voter fraud that can occur—it is by no means a comprehensive report of all the voter fraud that happens around the country.”

“Absentee ballots are the tools of choice of election fraudsters because they are voted outside the supervision of election officials, making it easier to steal, forge, or alter them, as well as to intimidate voters,” wrote Heritage Foundation Senior Legal Fellow Hans A. von Spakovsky in an op-ed.

President Donald Trump railed against the practice of ballot harvesting in an April tweet, claiming it is “rampant with fraud” and urging the nationwide adoption of voter ID laws. Many states have various restrictions around ballot harvesting, including limiting who can return ballots to family members or caregivers, or setting a maximum number of ballots that someone can submit on voters’ behalf.

Democrats have been pushing hard for universal vote-by-mail arrangements, arguing the risk of exposure to the CCP virus is too great for voters to appear at polling stations during the pandemic.

“People should not have to choose between their health and their vote, and that’s very important,” House Speaker Nancy Pelosi (D-Calif.) said recently. 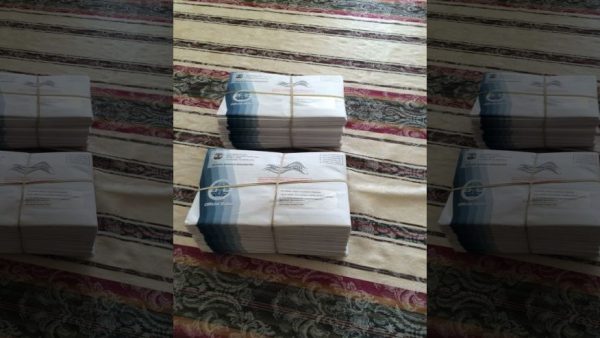 Amid rising concerns that the national Postal Service won’t be able to cope with an expected surge in mail-in ballots as Americans seek to reduce the risk of exposure to the CCP virus by avoiding polling stations, the USPS said on Friday it warned 46 states that they are at risk of having their residents’ mail-in ballots not be counted in the November election. This is because of state laws that allow tight vote-by-mail deadlines that the USPS may operationally not be able to meet.

In letters sent in July to various state election officials, Thomas J. Marshall, the general counsel for the Postal Service, said that “certain deadlines for requesting and casting mail-in ballots are incongruous with the Postal Service’s delivery standards.” One such letter was attached to a filing submitted by Pennsylvania’s Department of State to the state Supreme Court (pdf) on Aug. 13, requesting the court order that mail-in ballots will be countable as long as election officials receive them up to 3 days after Election Day.

In his letter, Marshall urged authorities to require that residents request ballots at least 15 days before an election, “and preferably long before that time,” rather than the shorter periods permitted under some states’ laws.

“This mismatch creates a risk that ballots requested near the deadline under state law will not be returned by mail-in time to be counted,” Marshall wrote in the letter.

Trump, a vocal critic of the Postal Service, contended recently that “the Post Office doesn’t have enough time” to handle a significant increase in mail-in ballots.

“I mean you’re talking about millions of votes. … It’s a catastrophe waiting to happen,” Trump said.

It comes as some lawmakers in Washington have raised concerns about delays in mail delivery amid reorganization efforts at the Postal Service.