An American oil and gas industry alliance—The Environmental Partnership—is pointing to their members’ efforts to reduce emissions of methane, a greenhouse gas the Environmental Protection Agency (EPA) says is up to 25 times more potent than carbon dioxide.

The EPA says that oil and gas production accounts for around 28 percent of U.S. methane emissions, with fermentation in animal digestive tracts, landfill gas, and coal mining also producing large quantities of the gas.

With its Natural Gas STAR and Methane Challenge programs, the Trump Administration-era EPA has adopted a policy of intra-industry cooperation, knowledge transfer, and the adoption of best practice—and simultaneously sought to roll back Obama-era rules clamping down on flaring, venting, and leakage.

The U.S. Department of the Interior eased the Obama rules in 2018, reducing the quantities of methane oil and gas producers would need to capture at boreholes and relaxing rules on leak detection. Current Secretary of the Interior David Bernhardt said that if allowed to continue, the Obama-era rules would “encumber energy production” and hurt job creation in the industry.

Late on Wednesday, however, the Trump administration’s deregulation efforts suffered a blow when Judge Yvonne Rogers of California’s Northern District blocked the rollback. Rogers’ ruling (pdf) said that the administration’s easing of waste prevention rules ran counter to the Interior Department’s mandate for responsible and safe drilling on federal and tribal lands.

In a statement, Environmental Defense Fund attorney Rosalie Winn criticized the Trump administration for seeking to reverse the Methane Waste Prevention Rule. “Today’s ruling shows their efforts are illegal, and provides for the reinstatement of common sense protections that are in the best interest of the American public,” she said.

According to the Bureau of Land Management, the 2018 revision reduced unnecessary compliance burdens, and deferred certain requirements on gas capture to state and tribal regulations.

The Environmental Partnership—an industry body composed of large and small oil and gas producers—released its second progress report on Wednesday. The report describes a voluntary program started by the American Petroleum Institute with 26 companies in 2017 to cut the emission of methane and other greenhouse gases from leaks and flaring in oil and gas wells and infrastructure.

Companies in the Partnership carried out over 184,000 inspections at more than 87,000 production locations in 2019. In the process, the Partnership says that over 116 million components were checked for leaks. A leak occurrence rate of 0.08 percent was reported, which was a reduction of 50 percent on the number of leaks reported the year before.

The oil and gas industry use a wide range of control devices to operate valves or control flow rates, liquid levels, or pipeline pressures. Such control devices can be powered by electricity or even compressed air where such sources of energy are available. For the majority of applications, however, such devices are powered pneumatically, using the pressure of the natural gas in the pipeline or container the device is controlling.

During operation, however, such devices ‘bleed’ natural gas, which is lost into the atmosphere. A high-bleed controller, according to the EPA, is one that bleeds 6 or more standard cubic feet of gas per hour (scfh). With hundreds of thousands of such devices deployed across the United States, huge amounts of natural gas are lost annually across the United States. The Environmental Partnership encourages members to quantify the amount of otherwise saleable natural gas that is being lost, showing them the benefits of replacing high-bleed devices with low- or zero-emission devices.

Another area earmarked for improvement by the Partnership is that of natural gas flaring, which is carried out when gas capture and transportation infrastructure is not available. Such infrastructure could theoretically capture natural gas emitted in the course of oil production or due to pressure surges in gas boreholes or maintenance of gas infrastructure, but cannot justify the extra technology and gas storage or transportation equipment required.

Flaring gas involves burning methane and other volatiles in a controlled manner, turning them into less polluting carbon dioxide and water vapor. As such, it is highly preferred rather than releasing methane into the atmosphere, but still wastes gas and associated products that could be saleable if captured.

Environmental protection measures include reducing flaring where possible, and optimizing burn efficiency where not. “Like other participating companies in The Environmental Partnership, Chevron leadership has established and continuously reinforces our commitment to minimize flaring,” said Chevron’s Permian Basin air team leader, Morgan Iannuzzi.

“When a company commits to reducing emissions, it impacts how employees plan projects, design facilities, and solve problems,” she said. “The Environmental Partnership enables companies who’ve made this commitment to learn from each other, share best practices, and raise the bar for the entire industry.” 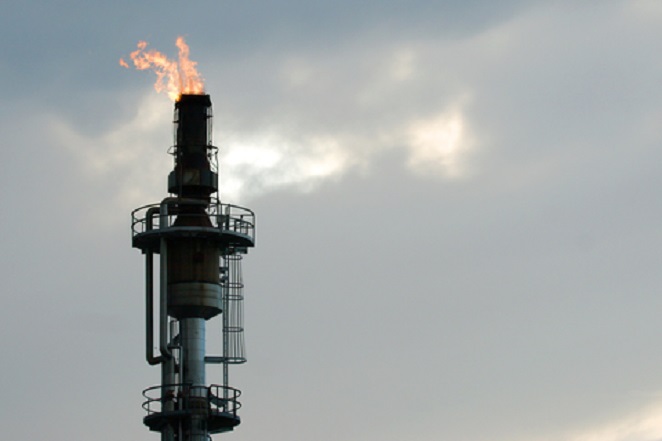