Over the next month, Ventura Water and the Parks, Recreation, and Community Partnerships (PRCP) will work together to re-purpose an estimated 200,000 gallons of water during the annual main line flushing program to irrigate City parks and trees rather than discharging water into streets and storm drains. The City’s water service area is a complex system of 380 miles of pipelines ranging from 4 inches to 36 inches in diameter. Routine maintenance is required to  flush out sediment, corrosion and remove “bio–film” that adheres to pipes over time.

In recent years, the City of Ventura has taken a proactive approach to minimize water waste during mandatory waterline flushing. In 2017, Ventura Water began operating the Neutral Output Discharge Elimination System (NO-DES) unit, a state-of-the-art truck that connects to fire hydrants and circulates, filters, and puts water back into the distribution system saving millions of gallons of water.

Beginning on the Westside and moving East, the City of Ventura will be flushing at approximately 200 locations where water mains end and pose water quality challenges. Instead of running the water to waste it will be captured and transported using the City’s Urban Forestry Department’s new 4,000 gallon water truck and applied to turf and trees at Arroyo Verde Park, Camino Real Park, Barranca Vista, Chumash Park, Hobart Park, and Community Park in addition to linear park spaces and city trees.

“Overseeing Ventura’s 42 parks and being water efficient remains a top priority for the Parks Department,” Nancy O’Connor Director of PRCP explained. “We share common goals as public servants to be good stewards of our precious local resources. It’s always a win for both the City and our community when we collaborate with other city departments like Ventura Water to save money and water.” 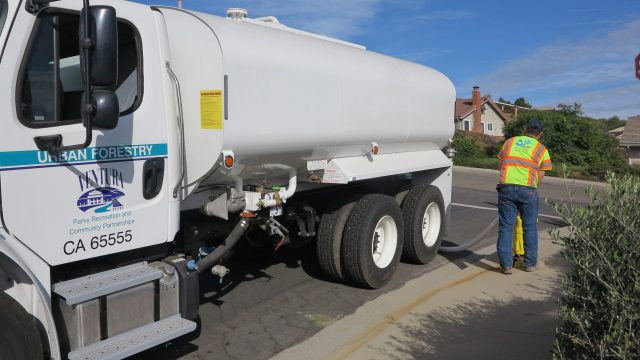