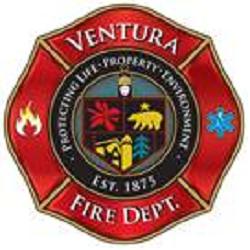 Fire units were dispatched to a reported vegetation fire threatening structures. Units arrived to find a growing fire in a watershed barranca. Fire crews made an aggressive attack on the fire and thankfully prevented spread to nearby buildings. Several medical offices, restaurants and acharter high school were evacuated and closed temporarily by the fire.
One backyard outbuilding and several residential fences bordering the barranca were damaged by the fire. No injuries were reported.
The fire originated in an area that is utilized as a flood control channel and is posted  “No Trespassing”.
No responsible party was identified, and the exact cause is under investigation. Aid was provided to the city of Ventura from the Ventura County and Oxnard Fire Departments including a 20–person wild–land hand crew to help with fully extinguishing the fire in the heavy vegetation. Telegraph Rd between Day Rd. and Bryn Mar St. was closed to through traffic for several hours.
Date Of Release: February 3, 2022Fire Incident Number: 22–0010766Incident Commander: Battalion Chief Matt BrockIncident Type: Vegetation fire threatening structuresDate/Time of Incident: 02/03/2022, 12:21 pmIncident Location: 5000 blk of Telegraph Rd. Ventura, CA 93003Cause/Origin: under investigationInjuries Reported: NoneUnits Committed On–Scene: 21Total Fire Personnel On–Scene: 106Agencies Involved: Ventura City Fire, Oxnard Fire, Ventura County Fire,
Ventura City Fire Department1425 Dowell Drive, Ventura, California 93003 805–339–4300