Thousands of gun-rights activists and other groups amassed at the Virginia State Capitol in Richmond on Monday before the rally dispersed. According to local reports, in a later update, there was one arrest, and the demonstration was described as peaceful.

There were fears that some militia groups would attempt to carry out acts of violence during the demonstration, which was held in opposition to proposed laws in the state legislature that would further restrict gun ownership. Those reported threats prompted Gov. Ralph Northam, a Democrat, to declare a state of emergency that banned all weapons on the Capitol’s grounds until Tuesday.

At around 1:30 p.m. police wrote on social media that the Capitol Square had emptied out. Local news outlets reported a woman was arrested for refusing to remove a bandana from her face. Police had earlier written that no arrests were made. 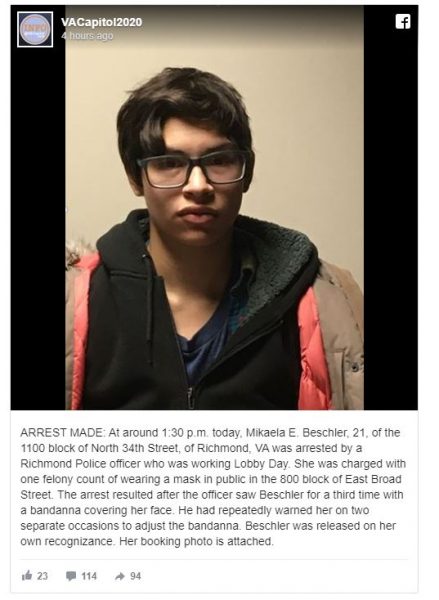 In a statement following the rally, Gov. Northam said that “thousands of people came to Richmond to make their voices heard. Today showed that when people disagree, they can do so peacefully. The issues before us evoke strong emotions, and progress is often difficult. I will continue to listen to the voices of Virginians, and I will continue to do everything in my power to keep our Commonwealth safe.”

He then commended state and federal law enforcement for assisting.

“You’re never going to get the criminals to turn in their weapons,” demonstrator Bill Hayden told local outlet WTVR. “That’s why we’re here. None of us have committed a crime. Go take care of the criminals. Don’t take the guns from us.”

Gun rights groups sought to block the state of emergency gun ban in a state court and argued it infringed on their right to assembly. A judge denied their motion last week, and their subsequent appeal wasn’t taken up by the state’s Supreme Court, effectively leaving the weapons ban in place.

The Virginia Citizens Defense League, one of the groups behind the rally, called on its supporters to obey Northam’s declaration, but it urged people to protest outside the Capitol grounds while armed.

“For every one gun owner on the Capitol grounds, we need another two to five people outside,” the league said in a statement.

“We have received credible intelligence from our law enforcement agencies that there are groups with malicious plans for the rally that is planned for Monday,” Northam told reporters on Wednesday in elaborating on his emergency declaration. “Intelligence shows the threat of armed militia groups storming our capitol,” he added.

The FBI announced on Jan. 16 it arrested three members of a white supremacist group known as “The Base,” who were reportedly planning to attend the Virginia rally.

Virginia’s House Republican leader urged white supremacists or other extremist groups should stay away from the rally.

“Any group that comes to Richmond to spread white supremacist garbage, or any other form of hate, violence, or civil unrest isn’t welcome here,” House Republican leader Todd Gilbert said over the weekend. “While we and our Democratic colleagues may have differences, we are all Virginians and we will stand united in opposition to any threats of violence or civil unrest from any quarter.”

The rally prompted national and international headlines as well as the attention of President Donald Trump, who urged people to vote for Republicans in 2020 in light of Democratic-proposed gun laws.

democrat presidential candidates would be pleased if they could get a similar sized turnout to any of their rally’s.

Even though gov blackface and MSN tried to kneecap the rally, turnout was good and peaceful. They are liars.