Will it Take “Mouth to Mouth” Remedies to Resuscitate the GOP?

It does not take a rocket scientist to see that the Republican Party in California is floundering. With registration of eligible voters hovering at the 20% range, this once proud organization appears to be suffering from a bad case of “benign neglect’.

Signs of former Republicans becoming independent s or joining the other team are everywhere.  As indicated in Steve Frank’s Heard on the Tom Toms report in this blog October 15th, Republican office holders in San Diego, Fresno, and throughout the State are fast becoming decline to State or even Democrats. Many believe in California, being part of the GOP, insures defeat.

Steve Poizner, running for Insurance Commissioner as an Independent in 2018, apparently ended up having his campaign being a preview for coming attractions.  Many conservatives have followed his lead.  Because of this, the Republican Party in California is now struggling finding viable candidates in local races and for legislative seats as well. As a result, in many cases voters have two Democrats to choose from in November.

How can it be our state is the same place that brought us Ronald Reagan, Pete Wilson, and George Deukmejian, all who were all popular two term governors in the last 40 years?  What has transpired to make California today a socialist enclave where leftist ideology reigns supreme?  How did the once powerful California Republican Party become the shell of its former self leaving loyalists to lament “Someone left a cake out in the rain”? 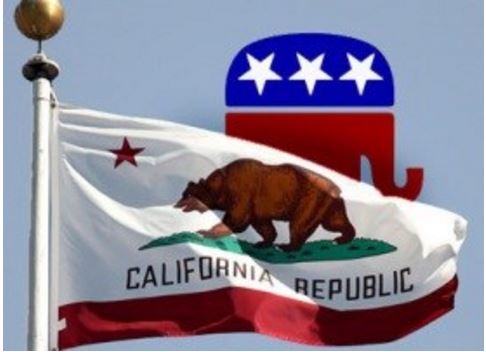 The GOP has had a bad case of crash and burn starting with Arnold Schwarzenegger’s surprise victory when Gray Davis was recalled back in 2003. The state party did not have a strong enough candidate to compete so it allowed Arnold the Republican in Name Only ( RINO) to take charge.  Things have never been the same since.

Soon his election, Republican numbers in the legislature have dwindled to the rock bottom place they exist today. They now hold only 25% of  the State Assembly and Senate seats. While this deterioration in power has transpired, those in charge of the State Party have done little more than shrug their shoulders and say “We were right about the issues”

At the same time the demography of Republicans in the State has continued to age with few young people joining up.  Whether this decline is the fault of parents, the schools, news media, or the Party itself, matters not.  What is really important is that the GOP has not been a popular place for Millennial’s, Generation X or Y to identify with.

At the same time the Democratic Party in California has done an excellent job in pushing an idealistic vision  to kids while  portraying conservatives as out of touch, wealthy, elitist fat cats, who hang out at the Country Club telling racist jokes to their white supremacy’s buddies.

As such how can the GOP do a makeover to get back in touch with their former constituents and recruit young people?

In  its voter registration efforts,  Republicans have to impart to those they are recruiting what principles they stand for.  Issues such as high taxes, job killing government regulations, excessive  pension payouts for public employees, high gas costs, lack of housing, low achieving public education, etc..,  must be a the forefront.

The party needs members to be proud of whom they are rather than being ashamed and hiding one’s own identity in the name of trying to become an office holder.  What to do?  Instead of wasting money on hopeless candidates during the next political campaign, why not send information now to people of all persuasions telling them which issues define being a Republican?

A good template to follow is what Jon Coupal, President of the Howard Jarvis Tax Association has done with radio spots his group sponsors. They inform citizens of the perils of repealing part or all of Proposition 13.  This is the type of issue and methodology the Republican Party should emulate in trying to woe new voters.

In a similar vein the State GOP needs to talk about things that matter.  Forget about discussing abortion, LGBTQ, gay marriage banning marijuana and most other social matters.  Instead concentrate on economic issues that answer the question “Are you better off now than before Jerry Brown took office for his third term?”

Weak leadership of GOP needs to change  This is better said than done as those in charge of the State organization have job security thru 2020.  Local delegates need to insist next time they choose officers,  proxy voters are not allowed to have a similar influence  they had in electing  those individuals currently in power.

Those who lead the State Party need to stop trashing Donald Trump.  Instead of RINO’s giving tacit approval with their silence on impeaching the President, the Republican establishment needs to get out of the closet and remind Californian’s about job growth and economic prosperity he has achieved.

Conservatives  must speak their minds but don’t excommunicate yourself or others from the party because of differences on a few issues A good example for  me is abortion. I happen to be pro life but don’t treat those who are pro choice like they are lepers. The same thing applies with legalized marijuana.  Having been a social smoker from when I was a teen, I don’t feel comfortable today being a “reality coordinator” for others.

What I am really trying to say is that the GOP tent needs to be enlarged in California, if they expect to become relevant once again.

Don’t be afraid to speak out for your love of the Constitution.  Also stand-up for the Electoral College which many progressives want to get rid of to have elections determined by their base in big cities.  A good way to defend the Electoral College is explain why the framers of the US Constitution started it in the first place to give a voice to small States who have limited power in the House of Representatives.

This is why we are a Democracy in a Republic.

Conservatives in general have to get out of their “a choice not an echo” mentality used by author Phylis Schlafly to justify Barry Goldwater losing in a 1964 landslide to Lyndon Johnson. It is time for Republicans in California  to conduct themselves with pride and purpose once again.

Unfortunately if this renaissance does not occur soon, mouth to mouth recitation may not be enough to revive this once proud institution in California.

Nah, just keep doing what you’re doing. At this point, the CA GOP is a zombie party, led by grifters and charlatans, eager to line their pockets on the false hope of revival. It’s already on life support. The demographics will finish it off.