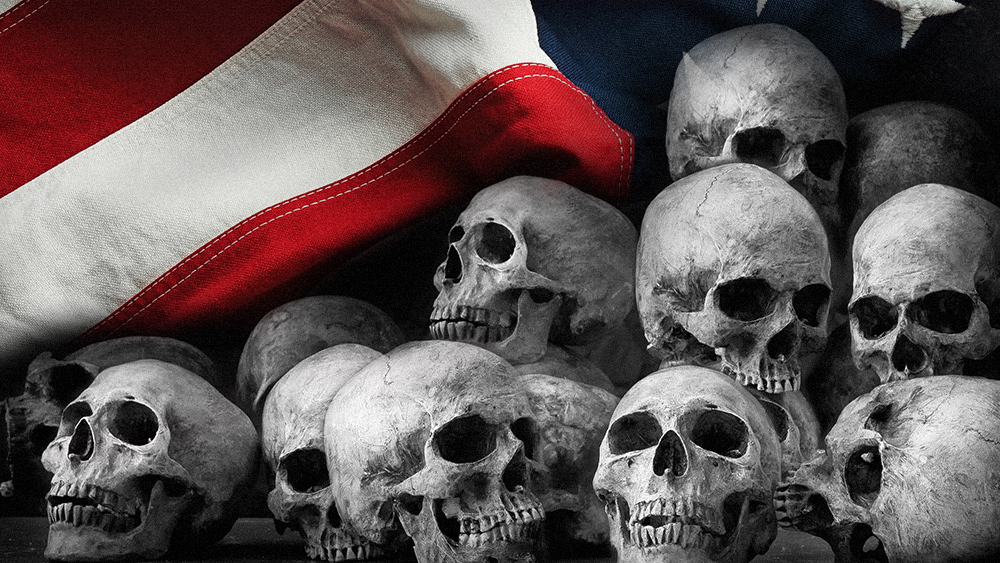 (Natural News) As Americans watch the disturbing coverage of what is happening to freedom and human rights across the globe, from supposed “democracies,” we note the terrifyingly apathetic reactions of nearly half of Americans.

Here at ANP we have watched and written about the Australian government, among other nations, rapidly rushing into outright dictatorship, as published video coverage show people being taken from their homes for just being “suspected” of having COVID and forced into indefinite stays at their “COVID Hotels.”

Law enforcement attacking and choking people in the streets for refusing to comply with what they consider, as do many of us, unreasonable mandates.

Forced check-ins with an image, cops rounding up legal citizens in the streets, shared on social media along with video evidence, and much more “dystopian nightmare” antics, begging the question, “When Will Someone Hold Human-Rights Hearings on Australia?”

Perhaps it was inevitable that a nation like Australia that began as a prison colony would be the first to become one again using COVID as an excuse to put the heel of their boot once again on their citizens’ throats.

The area functioned as a prison state for the next eight decades, and over the course of that time, around 160,000 convicts were sent there. The effects have been long-lasting, and according to the BBC, about 20 percent of today’s Australians can trace their roots back to a convict marooned there by the British. That includes their former prime minister, Kevin Rudd. His family goes back to his great-great-great-great-great-grandmother, who had been sentenced to life in Australia’s penal colonies when she was just 11 years old. The crime? Robbery.

Australia has always had a bit of a conflicted relationship with its convict past. According to The Conversation, it’s gone from shoving aside thoughts and memories of their ancestors to talking about them with a sense of pride. Because it wasn’t just a case of “we’re going to send all these murderers to Australia,” it was much more complicated than that. But no matter how you look at it, life in the Australian penal colonies was incredibly messed up.

The point here is basically Australia is a warning to rest of the world, and yet half of Americans either root them on in the name of “safety,” or deny that could happen here in America, or worse yet, want America to become more like Australia.

Enough about Australia, it was simply used as an example of what is likely to be an attempt by the International Community, including the liberals of America, to turn all nations into dictatorships where the citizens are nothing more than slaves.

The image at the top of this piece is astoundingly horrifying as liberals have become so control and power-hungry that is is not hard to imagine an argument by the control-freaks of the nation being “Well we can check your vaccine status if you let us slap barcodes on your forehead!”

Yes, to them this would likely be a welcome suggestion as long as a liberal leaders made it, yet if a conservative President were to suggest it, they would be screaming bloody murder about authoritarianism.

Remember years ago, during the Obamacare debate when we were assured their would never be death panels here in America?

Well, using COVID and vaccination status has brought about a number of examples of present day death panels for Americans.

One recent high profile example is when a hospital in Colorado, has refused to perform a kidney transplant, because she is unvaccinated.

A Colorado woman with stage 5 renal failure was months away from getting a new kidney. Now, she and her donor are looking for another hospital after learning UCHealth’s new policy.

According to UCHealth, the majority of transplant recipients and living donors are now required to be vaccinated against COVID-19. Neither woman has received their shots…

“For transplant patients who contract COVID-19, the mortality rate ranges from about 20% to more than 30%. This shows the extreme risk that COVID-19 poses to transplant recipients after their surgeries”

The donor, a friend of the patient, offered her view of this type of “death panel-like decision, when she stated “”Here I am, willing to be a direct donor to her. It does not affect any other patient on the transplant list… How can I sit here and allow them to murder my friend when I’ve got a perfectly good kidney and can save her life?”

This turn of events is not exactly new, and we are seeing more and more stories such as one found at MSN titled “No Vax, No Visit: South Florida Doctor Won’t Treat Unvaccinated Patients in Person.”

The family practice physician based out of South Miami sent a letter to her patients saying they will no longer continue serving patients who are not vaccinated from COVID-19 by Sept. 15.

Back in August 2021, an Alabama doctor also sent a letter telling his patients he would be stopping the treatment of unvaccinated current patients, and even posted a sign on his door.

More and more medical entities, whether hospitals like the one in Colorado, or private practitioners, are setting themselves up as their very own “death panels.”