Democrats made known their intent to do a hostile takeover of the U.S. Supreme Court through court packing as they introduced legislation—not even waiting for a report from President Joe Biden’s Commission* on the Supreme Court—to increase the number of justices from nine to 13.

Leading the hostile takeover of the judiciary—the third branch of government—were Senator Ed Markey, D-MA; House Judiciary Committee Chair Jarrold Nadler, D-NY; Rep. Hank Johnson, D-GA; and Rep. Mondaire Jones, D-NY. These legislators claimed they were unpacking the court since President Donald J. Trump had made three appointees to the highest court. What they did not mention was that the U.S. Constitution gives authority to the President to nominate Supreme Court justices and authority to the U.S. Senate to confirm those justices.

In reality, Democrats believe that they need to remake the Supreme Court so that there is no check and balance of the Executive Branch (President) nor the Legislative Branch (Congress). It becomes imperative that the Judiciary Branch is under their control also. To do so requires doing away with the filibuster and increasing the size of the U.S. Supreme Court.

The current size of the U.S. Supreme Court has been the same since 1869 despite an attempt by President Franklin Roosevelt to expand the court in 1937 in order to pass his New Deal policies which were being blocked by a conservative court. That attempt was shut down by his own party as the Chairman of the House and the Majority Leader of the U.S. Senate stood in his way.

Ironically, U.S. Senator Joe Biden in 1983 called this attempt to increase the number of justices on the court a “bone-headed idea and a terrible mistake to make and it put in question the independence of the most significant body in this county—the U.S. Supreme Court.” Both current Supreme Court Justice Stephen Breyer and former Justice Ruth Ginsburg appointed by Democrat President Bill Clinton have opposed such an idea. 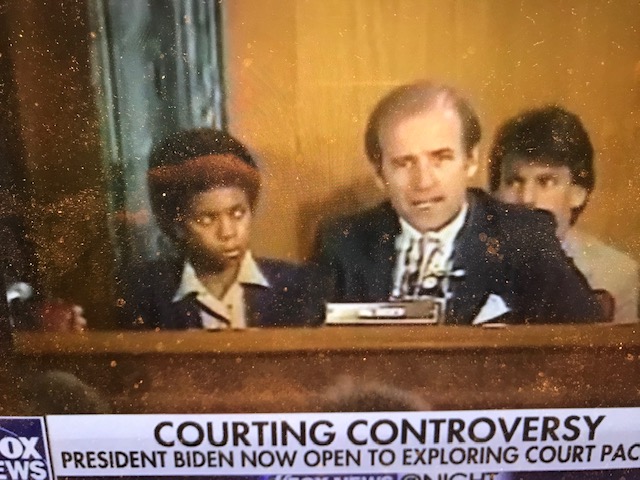 The new bill is nothing more than a “power grab” to eliminate checks and balances and eliminate the place of the judiciary branch—destroying the U.S. Constitution and the Republic at the same time.

This power grab is motivated by the Democrats fear that the highest court in the land will make rulings that will impact voting rights, race and abortion issues. The Democrats even suggested they could make their desires to increase the U.S. Supreme Court by adding this issue to the infrastructure bill now being considered.

According to the American Center for Law and Justice: the only reason that this legislation is being considered is because Democrats believe:

It is time for voters to let their legislators know (by phone calls and emails) that Americans will not tolerate such legislation. Elections have consequences. Make your voice count! Protect the U.S. Constitution! Protect the U.S. Supreme Court!

The hypocrisy of the Demonrats is insane. They don’t even try to hide it anymore. They will change your country into something you won’t recognize…if you let them. Packing the court, is just part of their scheme. Eliminating the filibuster & the electoral college…granting statehood to DC and Puerto Rico…giving citizenship to illegal aliens…passing H.R.1 When is the American public going to wake up to what the radical left is doing, under the guise of Old Joe being a kind and “moderate” ? He was merely their Trojan Horse folks. All this leads to one party rule…just like Marxist-Communist-Socialist countries you’ve read about…that you choose not to live in. Remember that.