Move the Needle, a California Political Action Committee has put together an evening of entertainment hosted at Mrs. Olson’s Coffee Hut. A ticket purchase offers a night of comedy, blues, and some up close and personal time with two candidates running for office in pivotal races across Ventura County 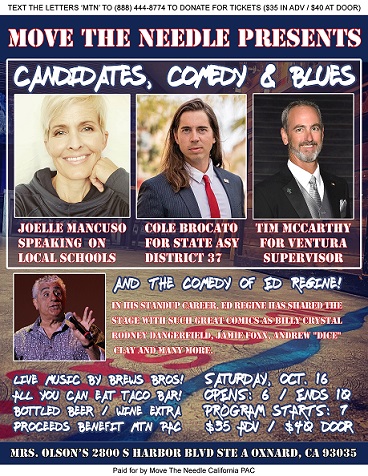 The evening will have comedian Ed Regine performing his stand up comedy. He has had a full career in New York entertainment, a Hollywood acting career with Tom Hanks, Linda Blair, John Savage, Al Pacino and many more. In addition, Ed has performed stand up with Billy Crystal, Rodney Dangerfield, Jamie Foxx and Andrew “Dice” Clay to name a few. The Brews Bros will be performing their Blues sound and entertaining the crowd throughout the night.

Speaker Joelle Mancuso, will speak on troubling curriculum in school districts across Ventura County and how to become a parent advocate. Cole Bracato is running for the California State Assembly District 37 seat, and Tim McCarthy is running for the Ventura County Board of Supervisors District 2. Both candidates are new to politics, and have decided to run for office to take back Ventura County from a Socialist trend which is mandating COVID-19 shots for young children, opening our schools to Progressive Sex Education and the propaganda of Critical Race Theory.

The fundraiser will be held on October 16, 2021. The taco bar will open at 6pm, with the program commencing at 7pm. Festivities will be over at 10pm. Don’t worry, there is plenty of parking to handle any crowd.

The host for the event is Mrs Olson’s located at 2880 S Harbor Boulevard, Oxnard CA. Your admission ticket includes the All You Can Eat taco bar and the entertainment. Beer and wine are extra.

Move the Needle will receive proceeds from the event, tickets for which can be purchased in advance by texting “MTN” to (888) 444-8774. Proceeds will be used to benefit those candidates and causes MTN supports..