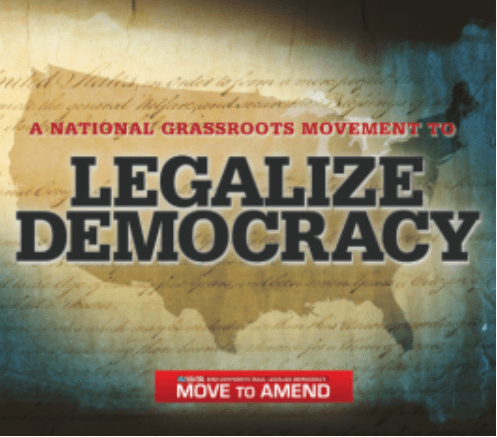 We will screen Legalize Democracy, a new 30 minute documentary from Move to Amend. Historical timelines featured in the film tell the story of the Supreme Court cases that shaped the doctrine of “corporate personhood”, the rights guaranteed by amendments fought for by people’s movements, and the intersection of law and culture that codified and created discrimination based on race.

Bill Haff, Director of the Ojai affiliate of Move to Amend, will address us and answer questions about the movement.

Move to Amend is calling for an amendment to the US Constitution to unequivocally state that inalienable rights belong to human beings only, and that money is not a form of protected free speech under the First Amendment and can be regulated in political campaigns.
Discussion and update on the current status of the Move to Amend movement follow.

By Citizens for Peaceful Resolutions