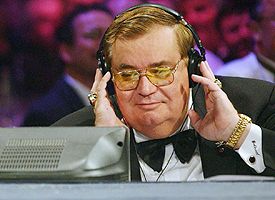 VENTURA—The Main Event 1st Annual Boxers Reunion featuring “The Colonel” Bob Sheridan will be coming to The Crowne Plaza “Top of the Harbor” Hotel, viagra 40mg 450 E. Harbor Blvd., nurse on Tues., Jan. 28th at 5 p.m. as well as athletes from the Los Angeles Dodgers and Angels wishing to support former boxing greats.  These professional baseball players are training locally at David York’s Core and Fitness Gym prior to the start of spring training.

“The Colonel” Bob Sheridan is a Hall of Fame American and International Boxing commentator that has broadcast over 10,000 fights on television and radio including 975 championship fights all over the world in the last 30 years.

The Main Event is a benefit with Silent Auction featuring sports memorabilia for the Retired Boxers Foundation, a non-profit corporation, whose mission “is to assist retired professional boxers, especially those suffering from alcohol and substance abuse problems, homelessness and the effects of dementia, in the transition from their glorious days in the ring to a dignified retirement.”  Tickets cost $30 and can be obtained by calling James C. Nicoll, Corporate Sponsor Volunteer Chairperson at (805) 642-1775.  The Main Event’s premier sponsors are the Players Casino Ventura and Land Rover Jacquar.  Other event sponsorships are still available by contacting Jeanne Lane at (805) 651-9188.

“Many people ask me  if I remember  doing my first world title fight”  said Sheridan.  “The answer to that question is very simple.  I’ll never forget it.  It was in 1968 and it was the World Boxing Association heavyweight championship fight in Oakland, California where Jimmy Ellis won the title over Jerry Quarry in a bruising fight.”

“I intend to keep calling fights as long as the producers are willing to keep me working their fights.  I’m very lucky to have loyal producers.  I do the international broadcasts for both HBO and Showtime   I do a weekly show on radio on New Zealand’s “Sports Five.”  I do regular interviews for Irish and various U.K. outlets including Sky Sports and the BBC.”

“When I run into fans around the world, many of them are very curious about my health situation,” said Sheridan.  Since my hospitalization in 2010 for six months followed by spinal cord surgery, I have never felt better. My wife has me on this natural supplement called “Product B” which works at the cellular level.”

The Retired Boxers Foundation is a nonprofit corporation started in 2000  by former four-time New York Golden Glove fighter Alex Ramos, known as “The Bronx Bomber.” “Professional boxing is the only professional sport which does not have a pension plan for its retirees,” said Ramos.   “The RBF believes that everyone who earned a living should be able to retire with dignity.”

Ramos story is typical of many fighters.   He moved from the “spotlight to the streetlight” and battled alcohol and drugs before regaining his sobriety and self-respect.  Ramos says he believes that “God intervened” so that he could assist other boxers who careers “remain in the history books and in the boxing archives” but “whose lives are a mess.”

The Retired Boxers Foundation received an early boost during its first five years when film director and screenwriter Ron Shelton of Ojai gave a gift of $50,000 from his boxing film “Play it to the Bone” (1999).  Ramos, nor anyone else, receives pay for their work with the foundation.  Donations go to produce Dignity Packs  for former boxers that include socks, underwear, a sweat suit, toiletries, and shoes.  Other programs the Retired Boxers Foundation sponsor go toward 1) financial 2) rehabilitation 3) housing 4) youth and 5) senior citizen services.

Doug Casey on Crashing Markets, Commodities, and What Happens...