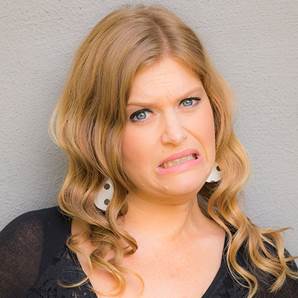 THOUSAND OAKS, Calif. – Live Standup Comedy on the Hill returns Saturday, July 11, 2020 at the regular time of 8:00 pm.  This month the series appears under the new HillcrestArts Online Live Series, until it’s safe to be back on the hill.    July’s lineup includes Gina Stahl-Haven, Andrew Sleighter and Bill Santiago.   Professional local comedian Jason Love produces this monthly show in collaboration with the Hillcrest Center for the Arts.  The show features a new lineup each month with some of America’s funniest headliners streaming live via Zoom and YouTube, allowing viewers to laugh or chat with fellow audience members.  That glass of beer or wine is now only steps away and every Lazyboy is the best seat in the house.

Gina Stahl-Haven began performing improvisation in college at San Francisco State University, where she took her first comedy class. She became a professor of rhetoric at the University of San Francisco, also teaching at College of Marin and Santa Rosa Junior College, while living in Novato with her husband and two kids.  Gina was the second place winner in the exclusive San Francisco Comedy Competition last year.

Andrew Sleighter is known for his laid-back style and clever writing.  He’s performed on Last Comic Standing, recorded a comedy special for Dry Bar and made his late-night stand-up debut on Conan. He’s also written and performed sketch comedy for Comedy Central and wrote and blogged for the Sports Show with Norm Macdonald on Comedy Central.  A regular at colleges and comedy clubs across the country,  Andrew’s also performed  at some of the most prestigious comedy festivals in and out of the country including Bumbershoot, Bridgetown, Gilda’s Laugh Fest, The Aspen Comedy  Festival, Laughing Skull, and the Johnny Carson Great American Comedy Festival..

Bill Santiago is a standup comedian, author and former journalist. While connecting solidly with his Latino fans, Santiago is just as popular for his savvy mainstream material, reminiscent of George Carlin and Jerry Seinfeld, and showcasing Santiago’s journalistic roots, obsessions with language, and keen insights on everything from family to culture to cats to politics to religion to life and death to dance to Facebook.  Known best for his bilingual TV specials on Comedy Central, Bill’s comedy style is a lighthearted look at life in America.  He has appeared on “Comedy Central Presents”, “Late Night with Conan O’Brien”, “Que Locos”, “American Latino”, and Comedy Central’s “Premium Blend” and “The Late Late Show with Craig Ferguson”. His book “Pardon My Spanglish iPorque Because!” has been featured on “Good Morning America Now”, NBC “Today in New York”, BBC World, ABC News “Exclusiva”, Univision “Al Despertar,” Sirius Satellite Radio shows, and more.

Standup Comedy viewing price for the show is $12.00.  After payment, audience members will receive both a Zoom link and a YouTube Live link via email. Those who participate via the Zoom Link, will have their microphone open so as to provide some love and laughter for the comedians. Log in early at 7:55 pm for a pre-show chat with Jason Love. You can also appropriately on-chat to your friends during the show.  Tickets may be purchased at by calling (805) 381-1246 or www.hillcrestarts.com.

WHAT: Live Standup Comedy on the Hill features a different line up of professional comedians on the second Saturday of each month.   Some of Hollywood’s most popular headlining comics perform right here in our own backyard.  July’s show features Gina Stahl-Haven, Andrew Sleighter and Bill Santiago, with host Jason Love.

TICKETS:
Participation link is $12.  Suggested for 18 and up.

OTHER:
After payment, audience members will receive both a Zoom link and a YouTube Live link via email. Those who participate via the Zoom Link, will have their microphone open so as to provide some love and laughter for the comedians. Log in early at 7:55 pm for a pre-show chat with host Jason Love. You can also on-chat to your friends during the show.