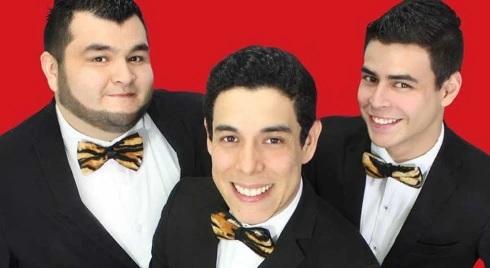 Pedro Palacios (Guitar and First Voice), founder of the trio started playing guitar and has been composing songs since 2000. Already attending college, he decided to be part of the cultural group “La Tuna de FIME”, where he participated in writing love and humor stories. In 2009, Pedro receives an invitation to a radio program to interpret some of his songs, upon realizing that the program was comedy, he asked the announcer for permission to sing some humorous songs he already had. With intent of preparing something original for the public, he decided to invite two companions from La Tuna. Thus, Los Tres Tristes Tigres appeared for the first time in Monterey on February 6, 2009. Thanks to the public’s excellent response, they performed at the best comedy venues in Monterey every weekend (Thursday, Friday and Saturday), for almost 4 years without interruption. In mid-2012, Jesús Gallardo (Accordion and Third Voice) is integrated as an accordionist. In December of that same year, Karla Soria (Artistic Director and Social Networks) and Damara Félix (Manager) are integrated into the work team with the intention of giving the group an internet fanbase. Juan Carlos Melendez (Audio and Staff) joins the team 10 months later. In January 2013 they upload to YouTube “My New Account”, a parody of The Invaders of Nuevo León and goes viral amassing more than 4 million views, weeks after its publication.

Thanks to that and other songs like “Mrs. Enojona”, “El Corrido de Memo Ochoa”, among others, the group has achieved great acceptance in Social Networks and is currently making presentations throughout the Mexican Republic. Los Tres Tristes Tigres already have an album called “Obrando en Grande” under the signature of the UNIVERSAL MUSIC label. They have participated in advertising campaigns for Telcel, Pepsi and KFC. The most important platform for the Three Sad Tigers has been the Social Networks. They have managed to position themselves in the best live comedy venues in Mexico, with a light humor and for all ages.