‘Every Time You Comply, You Get Weaker’: RFK Jr. Electrifies Anti-Mandate Rally 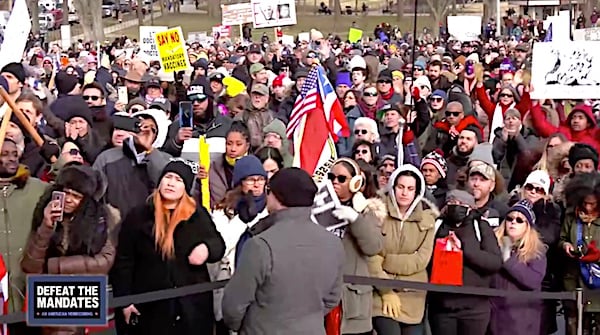 Despite frigid temperatures, thousands of Americans showed up Sunday on the National Mall in Washington, D.C., to voice strong opposition to COVID-vaccine mandates.

“Every time you comply, you get weaker,” said Robert F. Kennedy Jr., a featured speaker at the “Defeat the Mandates” event. “Every time you say ‘yes,’ you’re getting pushed back to a weaker position.”

“The hill that you’re going to die on is the hill you’re on right now,” he said, “and they’re coming for our children.” 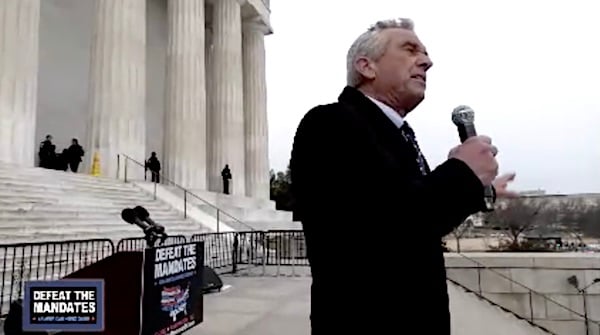 Kennedy hammered the companies that manufacture the experimental vaccines being mandated in many locations worldwide, with no legal liability.

“You think they found Jesus suddenly … and they’re suddenly concerned with public health?” he said. “These are the companies that gave us the opioid crisis. These are not good citizens, these are criminal enterprises.”

He warned of what he called “turnkey totalitarianism,” as dark powers look “to control every aspect of behavior.”

“Today the mechanisms are being put in place so none of us can run and none of us can hide,” Kennedy said, warning of efforts to cut off the food supply.

He stressed three points for people to memorize.

Kennedy was joined by doctors who have been censored by Big Tech as they warn of the dangers of the COVID shots.

Among them was Dr. Robert Malone, one of the developers of the technology being used in today’s vaccines.

“They are not completely safe and the full impact of their use remains unknown.”

“The dark winter predicted by our president and pushed by the fear-mongers in our media, is failing to materialize,” he continued.

Kyle Warner was a professional mountain biker until he was severely injured by a COVID vaccine. 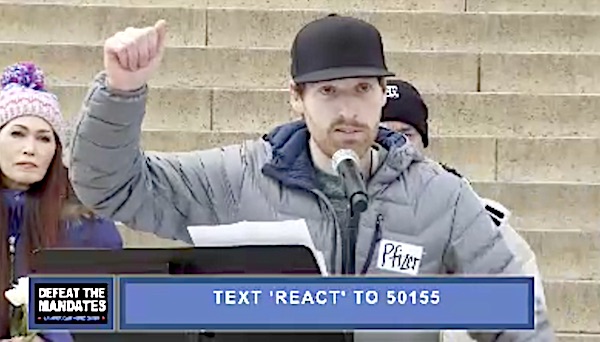 Warner challenged President Joe Biden and health officials to hold a meeting with the victims of adverse reactions to the coronavirus vaccines.

“Look them in their eyes, acknowledge their suffering, admit this is real, not just rare,” Warner said. “Make the companies responsible for the damage they are causing. … to even consider requiring a vaccine that no one will stand behind is a total disgrace to the very idea of America.”

Speaking to the event electronically from the United Kingdom, Dr. Tess Lawrie of the World Council for Health urged people across America and the globe unite to fight government dictates.

“When we disconnect from each other, we are easy game,” Lawrie said. Nobody should make us do, think, learn or be anything we do not choose. We are responsible for ourselves because we are free. I am free.” 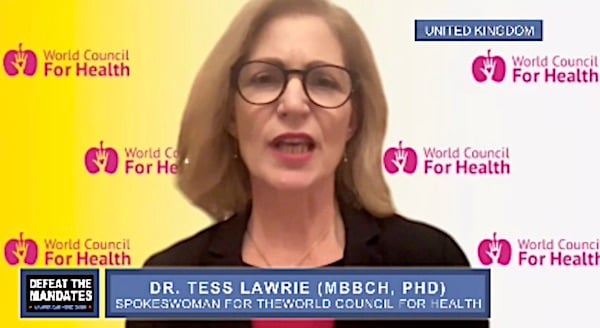 “It’s time to step away from fear starting today. This is reality … We will no longer tolerate interference in our lives and our choices.”

Will Witt, a best-selling author with Prager U., urged a return to God to help solve the crisis.

“We have to make God great again,” Witt said. “I am a big fan of unpopular opinions, because unpopular opinions are the ideas that made America. … You have to be fine being hated for the things that you believe.”

Rizza Islam, an author and minister for the Nation of Islam, said the devil is behind the current madness, saying “Satan [is] the one who has obviously declared war on all humanity.”

Del Bigtree, host of the HighWire who opposes vaccine mandates, said, “The truth always prevails. … We are the light warriors, we are the representation of our God!”

He scorched the mainstream media for their biased coverage of the issue, or complete lack of coverage.

“In this stupid city, where they’re still pushing a vaccine mandate, you will go down!” Bigtree exclaimed. “We are on the right side of history.”

“Get back to your Master, which is God, not Pharma. … They now know that we are no longer a fringe group … We are the leaders of the free world. … Now we take back our nation, we stand for God.”

Comedian Tyler Fischer provided some comic relief, doing his impression of Dr. Anthony Fauci, the White House coronavirus adviser, for his ever-changing positions on the wearing of masks during the pandemic:

“They don’t work … actually you should wear two masks … make it three … then wear a mask in the shower so droplets don’t go through the drain and harm your neighbors infecting them through the anus.”