NEWBURY PARK—“God gives us freedom. God has placed you in a nation where there is liberty,” said Godspeak Calvary Pastor Rob McCoy at the Sunday in-person communion service. “Jesus Christ forgives sin and gives life more abundantly. Jesus died to draw all people on earth to come to a saving knowledge in Him. The gospel of Jesus Christ changes every wayward soul and gives you freedom to walk away from sin and not to walk in fear.” The 9 a.m. service began with a prayer for President Donald J. Trump: “Lord, we pray for rapid healing. Heal this man and his wife. Strengthen him. Bless this man.”

Pastor McCoy introduced Jen Jacobson, of Beloved Cheesecakes who came from Silverton, Oregon (30 miles from Portland) to attend the 9 a.m. worship service with her three sons and also commented on the Oct. 3 Trump Boat Parade held in Channel Islands Harbor in which he spoke at on a boat with Joe Collins—a retired Navy sailor and candidate against Congresswoman Maxine Waters. He then asked how many had seen the documentary premiere “America, America“ shown at Godspeak on the same evening and which featured the church at the conclusion. Pastor McCoy then mentioned that Godspeak would be doing baptisms at each of the three services on Oct. 25. 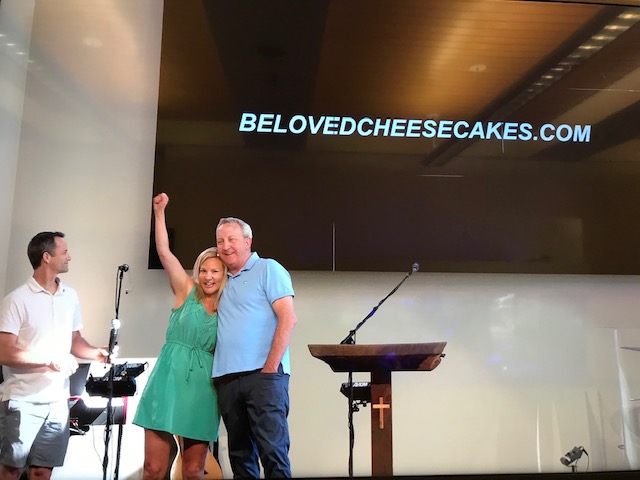 –how those in the Mormon community walked precincts for him when he ran for a California State Assembly seat;

–about how a Black man, who was a follower of Martin Luther King, shared with a Southern racist sheriff; and over time, the sheriff’s life was transformed.

“I remember John Perkins, who ministered in Pasadena, moved back to Mississippi after his brother was murdered by racists. Yet, Perkins was not able to preach to any white pastors until one pastor allowed him to come to his home for dinner. It led to that white pastor’s suicide because of the hate he then experienced.

“My point is you don’t define Christianity by the people you are unwilling to reach,” said Pastor McCoy as he introduced his text from. Acts 10:9-48 on Peter speaking to Cornelius but only after a vision in which God told him three times to go and preach to the Gentile Roman Centurion.

“God loves you and if I don’t, I am the one who needs to change. The idea of preaching the gospel to a Gentile was forbidden. This is one of the reasons why there is antisemitism in the world. This is what Peter was facing as he went from Joppa to Caesarea to share the gospel with Cornelius, the Roman centurion.

“Jonah couldn’t get away from God’s heart” (see Jonah 1:1-3). Jonah didn’t want to go to Nineveh. He thought: “those people are not worthy. God spoke to Jonah to preach to Nineveh. He refused to go 500 miles. He went 2,600 miles the other way.

“Peter has to go 32 miles to proclaim the gospel to the centurion. Which one are you?

“Cornelius family and friends were all waiting for Peter. He is beloved. He is a good man, a devout man, revered in the community. He gave alms (his time, treasure, and talents.”

“While Peter was still speaking these words, the Holy Spirit fell upon all those who heard the word…Then Peter answered, ‘Can anyone forbid water, that these should not be baptized who have received the Holy Spirit just as we have. And he commanded them to be baptized in the name of the Lord.’” (Acts 10:44, 47-48).

Once again it is nice to hear the words God and Jesus Christ at a McCoy sermon. All to rare as his sermons are usually more about politics than God.

Cant wait for this idiot to get covid. Disgusting lowlife.

In all my reading of Holy Books, never once have I seen anything that said God gives you the right to spread death and disease. You are a fake and a liar, and when the time comes for you to cross the rainbow, St. Peter is going to slap you in the side of the head so hard that the cosmos will ring for the rest of eternity.

He must be referring to that ‘other Jesus’. I find it interesting that their hero, Jesus, laid his life down like a lamb going to slaughter (Isaiah 53:7), yet they do not speak about this. Their ONLY concern is their own pockets, and personal liberty. This is opposition to what Jesus, Mohammed, Buddha, and many many other have taught. The greater good over personal freedom. If only this was in the forefront, then I may believe them. But their behavior stands in opposition to the bible I read. Mr. McCoy…you, sir, have a lot to account for. Shame on you indeed.

I don’t want offend anyone, but neither God nor Jesus can save you from Covid.