If You Don’t Op-Ed, Will You Get Enough?

After half a century, the New York Times will no longer publish an Op-Ed page — or at least not one under that name. Commentaries on the news written by contributors outside of the newspaper’s regular staff will be called “guest essays” to explain their role without using what opinion editor Kathleen Kingsbury calls “clubby newspaper jargon” (“Why We’re Retiring the Term ‘Op-Ed’,” April 27).

Today’s readers may not realize that “op-ed” is shorthand for placement “opposite the editorial” page in the layout of unfolded newsprint.  Yet while some of its format is specific to what one book title called “The Vanishing Newspaper” as early as 2004, the op-ed’s essentials deserve better than to silently crumble like the yellowing journalism of last week’s newspaper. 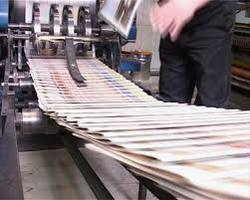 The format might seem to exemplify what Noam Chomsky calls mainstream media’s efforts “to strictly limit the spectrum of acceptable opinion, but allow very lively debate within that spectrum — even encourage the more critical and dissident views.” Chomsky’s own views were among the most critical and dissident solicited by the Times, an offer he declined because his academic background made “it enormously more difficult to write 700 words than 7000.”

Yet a tight argument made with a few hundred well-chosen words can lead general readers to more in-depth takes, and the range of disagreement that can be squeezed into them is broad indeed.  Nearly a century ago, the immense newspaper chain of William Randolph Hearst gave Bertrand Russell the space to recommend the individualism of anarchist philosopher William Godwin as an antidote to “docility, suggestibility, herd-instinct and conventionality” and the notion “that social conformity is the beginning and end of virtue.”

Kingsbury insists that the ability of the public to have its perspectives heard directly via websites like Facebook and Substack “is to be welcomed” rather than feared, but wonders whether “ideas can linger a while” in a cyberspace even more fixated on immediacy than the daily or weekly news cycles of print. The unfiltered energy of such formats, and of older ones like blogs and zines, can be focused rather than squelched by the sharpness and clarity pioneered by the humble op-ed.

If You Don’t Op-Ed, Will You Get Enough? | The William Lloyd Garrison Center for Libertarian Advocacy Journalism