A Canadian toddler who drank up to six bottles of cow’s milk per day almost lost her life after exhibiting some worrying symptoms. Two-year-old Mia Gencarelli’s parents sought help in the nick of time, and now they are warning others by sharing the facts they wished they had known sooner.

Anastacia Gencarelli noticed that her daughter was lethargic and had started tugging on her ears. Suspecting an ear infection, Anastacia took her toddler to the doctor, where she received a prescription for medication. However, after a brief period of respite, the mom noticed that Mia’s lethargy had returned.

Anastacia told CafeMom that she then noticed her daughter chewing on non-edible items such as baby wipes and chalk, worrying evidence of a dietary deficiency.

“She was very miserable and [showing] loss of color,” Anastacia explained, adding that it wasn’t long before her “mom instinct” kicked in, as per 7 News. Anastasia turned to her husband, Mario, and told him to “get the car ready, pack a bag … let’s go.”

Once at the hospital, a nurse clocked Mia’s poor state and expedited the family into an emergency treatment room. “We didn’t do triage, we didn’t register,” Anastacia wrote on social media, as quoted by The Sun. “[The] nurse kicked people out of a room for my daughter, and as we rushed in six nurses and two doctors followed. 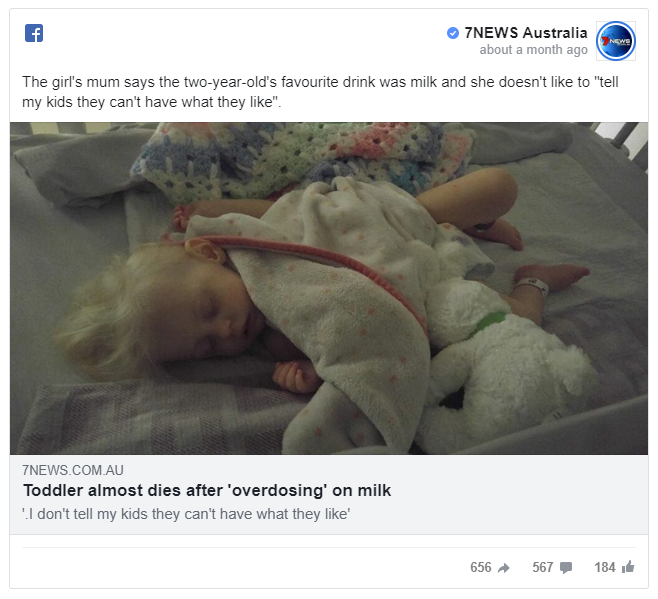 Mia’s mother explained that it took medical staff seven attempts to draw blood from her daughter; in the end, they had to attach an IV to the toddler’s leg.

Mia was diagnosed with iron deficiency anemia and severe internal bleeding as a result of her cow’s milk consumption. According to the Daily Mail, the family’s doctors revealed that Mia had lost three quarters of her blood.

The calcium in cow’s milk, if consumed in excess, can inhibit iron absorption; the resulting iron deficiency can have devastating effects. Iron assists in the formation of hemoglobin, which transports oxygen in the blood. Iron deficiency, therefore, causes hemoglobin levels to plunge and can even be life-threatening.

“[A] blood transfusion solved the hemoglobin issue,” Anastacia told CafeMom. “But due to the location of her IV, she developed a blood clot in her leg the IV was in, so she is also now on anti-coagulants to prevent that from harming her.”

Mia spent her second birthday, on Nov. 17, 2019, in the hospital. However, doctors presented the family with a treatment plan, including iron supplements, to improve the little girl’s health and strength exponentially.

Anastacia decided to share Mia’s ordeal as a cautionary tale for other parents. “You have heard of not giving a baby too much water?” she shared on social media, as quoted by 7 News. “Well, don’t give them too much milk either.”

Dr. Jonathon Maguire, a pediatrician and researcher at St. Michael’s Hospital in Toronto, Canada, explained to The New York Times that cow’s milk “is loaded with essential nutrients and energy. However,” the doctor says, “as with most healthy things, too much of a good thing is probably not a good thing.”

Two 450 ml to 600 ml bottles of dairy (or soy) milk is the recommended limit for infants in any 24-hour period. “Cow’s milk in excess will actually strip your body of iron,” Anastacia added, following her daughter’s ordeal. “[I]ron is what makes blood. No iron, no blood.”

Anastacia urged other mothers to “trust their mom gut” when it comes to their children’s health. A few hours more, she reflected, and Mia’s may have been a very different story.

Thankfully, the little girl received the help that saved her life in the nick of time.