On Wednesday, May 1, 2019, the Santa Paula Closed Session Agenda listed one item:

During the Closed Session Report of the Public Agenda, City Attorney Cotti reported that the council had authorized engagement in pre-filing mediation on this matter.

During the Public Meeting of May 1, 2019, Catherine Malzacher and Woody Maxwell spoke. Ms. Malzacher, daughter of Fred H. Malzacher explained how her father, an immigrant, worked tirelessly to make a perfect farm, even receiving an award for the quality of product, while also building a new business.

This was basically the same presentation she gave when the proposed wastewater plant was approved. Read about the 2005 meeting here where the CURB was changed without a vote of the citizens, which is allowed due to special language in the Santa Paula SOAR. Note language describing the land use and 2005 CURB modification for the plant here. The here linked article from the Santa Paula Times reports on the selection of the plant operator under the DBOF model (Design, Build, Operate and Finance). Minutes regarding DBOF selection in 2007 here and here. 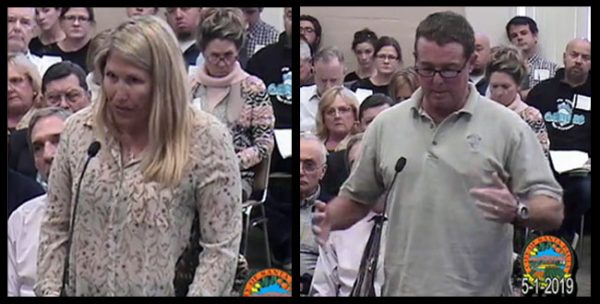 Woody Maxwell, son-in-law to Fred H. Malzacher and husband to Katherine Malzacher, reminded the council of non-cultural, viable bacteria which are found in wastewater and are sent to the groundwater. Local well waters are contaminated with bacteria and chlorides, causing the crops to die. The Malzachers never repeated the peak year of 98 tons after the waste water plant went live. And, in fact, all avocado trees died and were removed and new, less valuable crops were planted which failed. The mountain view was replaced with a chain link fence with barbed wire on top of it. The city councils in the interim just watched the destruction. Now, he said, the city proposes to pass on the pollutants via the latest plan to reduce the chlorides. Read about that plan here where the consultant proposed a pipeline to Limoneira to send the water bypassing the local percolation ponds. Mr. Maxwell said that without RO (Reverse Osmosis) the city is just passing pollutants. Had the city listened to the well-informed citizens and consultants originally, it would have saved $20 million. Everything she said twelve years ago came true, said Mr. Maxwell about Ms. Malzacher’s statement.

RFQ and RFP For New Plant

The city’s RFQ (request for quotes) issued in 2007 is noteworthy for what it does not mention in the functional requirements: solution to the chloride problem. See page 4 for the core treatment technology and overall process design. The new plant was designed to address the pollution to the local waters, but not chlorides. This linked report describes the plant history including litigation. See page 3 for chloride reference.

In the RFP, there is language shown below that raises a red flag. Is there a minimum distance required from a waste water plant? Was the city concerned about the adjacent properties at the time and wanted bidders to address? Many studies including this one indicate issues of proximity.

The 2015 spill covered adjacent properties with raw sewage. Read about that spill here.

In 2018, the city proposed a public water fill station where trucks could self-fill with treated water. The status of that project is unknown, although the city was warned by Dr. Edo McGowan at that meeting, that the Santa Paula WRF (water recycling facility) treated water did not meet Title 22 standards. Katherine Malzacher said she would provide the city with their data to which Mr. Cotti, city attorney, indicated he would review.

In 2019, the city issued its 2018 Annual Recycled Water Report to the Los Angeles Water Board. Notable in this report is the city’s claim that it is in compliance with Title 22 because “no recycled water was sent to recycled users”. In fact, this claim is repeated several times. This might mean that the city did not implement the self-fill station or they are not considering the pathogens in the percolation ponds which are mentioned the the 2018 report shown below.

Familiar coliforns are e.coli and fecal coli. Read about these coliform here.

Other Reporting on the Plant

Item 4 above, the Performance Evaluation, is incorrectly stating facts. Recycled water was delivered. This water was delivered on a constant basis, although unwanted, to the Malzacher ranch and in doing so damaged fruit trees. This is because of the wastewater treatment plants initial design which, although warned this would happen, chose to ignore the problem. The result is that a wastewater plant was improperly designed and has now, perhaps irreversibly, damaged an adjacent enterprise. This eventuality was noted by the ranch owners but that warning was ignored and although the problem remains, the City continues to basically ignore the damage.

Try to get one of the council members to pull it for discussion.