Share
Facebook
Twitter
Linkedin
ReddIt
Email
Print
Tumblr
Telegram
Copy URL
By Sheryl Hamlin
.
During the past two years, discussion of annexation to the Ventura County Fire Protection District brought confusion about the amount that was to be paid to VCFPD.The allocation of property tax by cities within a county is driven by the rules of AB 8, which is why the report is called AB 8 TRA (Tax Rate Allocation)

The county has recently released the FY 19-20 allocations which shows, as we reported here, that .1650 will be removed from the city’s slice of .2088 leaving about .0438504 in a new slice. Note the city cannot give away any other allocation except its own specific allocation.

The FY 18-19 report is here: FY 18-19, as a point of reference showing the Santa Paula “slice” without any allocation to VCFPD. The new report can be viewed here showing the new allocations: FY 19-20 AB8 TRA Report

To visualize the slices of the city’s total allocation, the following pie chart shows the slices relative to each other. Note the four largest allocations out of about $22 million: SP elementary, SP high school, VCFPD and Ventura County General Fund. 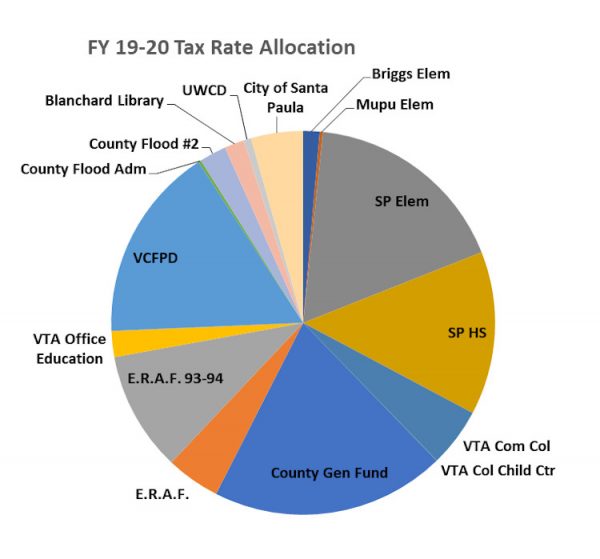 To visualize the slices of the city’s total allocation, the following bar chart displays actual dollars. Santa Paula can expect to receive about $1 million in secured property tax. Note this does not include the VLF swap (read past article here), which comes from another report. 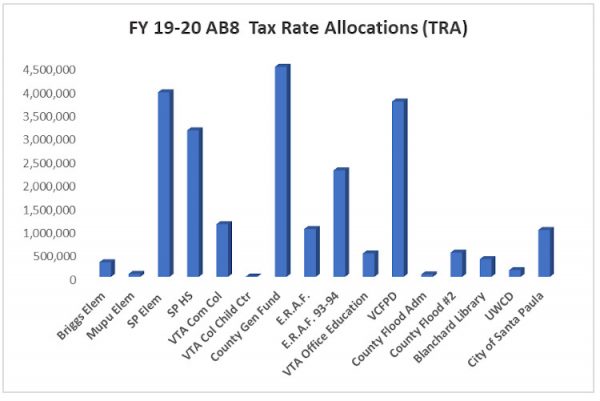 This budgeted amount is in line with the county report of $1 million in secured property taxes.

The final approved FY 19-20 budget has not yet been posted.

Miles Nels: Santa Paula prior to the annexation to Ventura County Fire Protection District received .1650+.0438504 or about .2088 or 20% of the total pie. The city gave part of its slice to VCFPD for fire protection, resulting in the smaller slice, but this is not indicative of the actual tax flow for real property because for the .1650 it replaced its fire department.

Think of of the pie as $1 and the apportioned amounts as cents on the dollar. SP slice is $0.04 cents for every dollar of property tax. SP is a low property tax city.

To understand the .1650 slice ( turquoise) for VCFPD, think of the whole pie as 1.0, so .1650 ia a decimal representation of the slice. The SP slice is about .0438504 (shown in pink) which is smaller than the turquoise. The county uses 10 digit decimals to ensure accuracy in computing the allocations. The sum of all slices equals 1.0.

Numbers in second paragraph are they percents and percents of what. What does ERAF mean?