Share
Facebook
Twitter
Linkedin
ReddIt
Email
Print
Tumblr
Telegram
Copy URL
Sponsored - Job Posting
By Sheryl Hamlin
.
At the January 15, 2020 Santa Paula City Council meeting, Interim Police Chief Matthew Rodriguez reported on the Police department activities for the last 90 days.Opening with the statement “there is a lot to be proud of”, the Chief then summarized months and months of critical police data in a few slides.

The State legislative changes requiring hundreds of hours of records changes were:

And at the Federal level, the FBI is increasing the Part 1 Crime category from 8 types of crimes to hundreds, for which the records department must be prepared.

Chief Rodriguez reported that it took four months to audit all firearms in possession of SPPD including 350 in evidence. The department purchased software to manage firearms.

The Evidence Clerk Kate Bader reviewed over 12,000 items of evidence with 7,289 retained, thus saving the department $5,000 a month in off-side storage.

Without dwelling on the criminals, the Chief highlighted the high profile crimes on which the detectives focused intensely working 24X7 to solve these crimes. 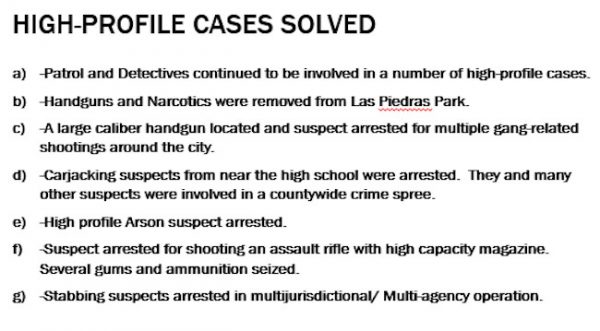 Working with the Reserve Commander, they are increasing staffing as evidenced by the earlier swearing in of Shawn Virani.