On Saturday 5/02/20 at approximately 3:21 PM, Santa Paula Police Dispatch received a report of a shooting in the area of Santa Paula Street and Mill Street. SPPD Patrol Officers and Special Enforcement Officers respond to the scene. Witnesses stated approximately 4-5 gun shots were heard and a vehicle was seen leaving the area at a high rate of speed. Through the investigation SPPD learned an altercation had taken place between the occupants of the two vehicles, with an occupant of one vehicle firing at the other occupied vehicle.

SPPD Detectives and SEU Officers were able to identify two of the occupants of the suspect vehicle. They were identified as Christian Lemus age 22 and Javier Espinoza age 22, both residents of Santa Paula. Lemus and Espinoza are known associates of a criminal street gang.

On Friday 5/08/20 at approximately 7:00 AM, the Santa Paula Police Department SWAT team, assisted by an outside agency High Risk Warrant team, served a multi-location search warrant related to the shooting. During the search warrant SPPD Detectives and SEU Officers located a firearm, gang paraphernalia and Espinoza was taken into custody without incident. Lemus was not at his residence at the time of the warrant, however he was later located by SEU Officers in the City of Oxnard and taken into custody without incident.

Lemus and Espinoza were booked at the Santa Paula Police Department  for the charges of 246 PC, Shooting at an Inhabited Vehicle; 26100(D) PC, Discharging a Firearm from a Vehicle; and 182(A)(1) PC, Conspiracy to Commit a Crime.  Both were transported to the Ventura County Main Jail for lodging.

Anyone with information regarding this case is asked to contact Detective Dan Potter at (805) 525-4474 x287 or [email protected]. 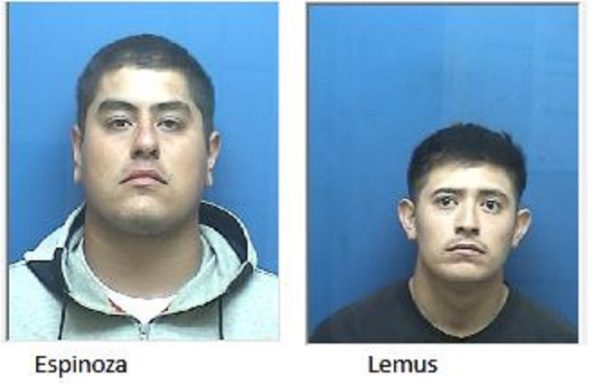